The Bradford Pear Saga All But Ends

If you’re a regular reader, you know I’ve had an ongoing project to deal with a downed Bradford pear that first fell on August 3. This was the first part to fall. 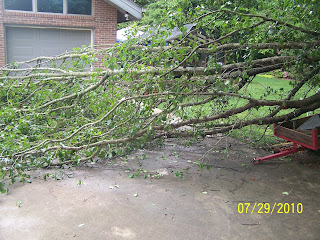 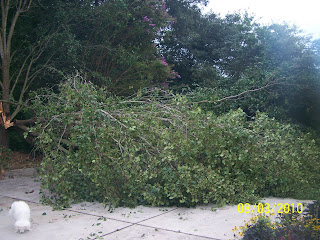 Then the third, leaving three stems which I cut down. 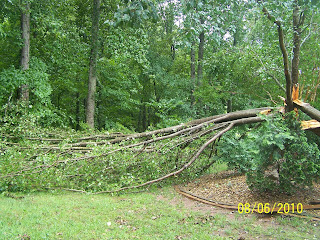 After spending about ten 1-3 hour mornings, the tree has been removed, except for the main trunk, and I’m sure glad as it about whipped me. Compared to many folks in this situation I’m pretty fortunate because I have a fireplace in which to use the wood, a wooded area with a steep ravine in which to dump the debris, and a good chainsaw.

I’d mentioned in an earlier post that if I’m gonna do work, I want good tools (same way in the kitchen) and if I’m cutting wood I want a wood eating machine which is just what my Stihl Farmboss is. I’ll admit to wishing I had a lighter 10” Poulan when I was cutting the small branches above my head. All that is left is splitting the bigger logs and stacking them. And perhaps the best part of all is that I’m way out of shape and overweight and want to change that – this has forced me in the right direction. It took about 9 hours to get to this point. 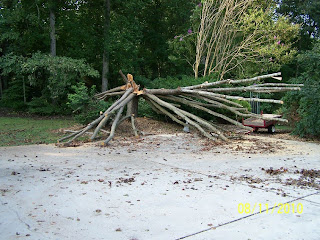 I knew the Bradford Pear had lots of branches, but now that I’ve touched them all, I’m not surprised it fell from it’s own weight. Not only does it seem to have a hundred big limbs, it must have a bizillion small branches. If I were in the tree cutting business, I’d charge the same for a big Bradford Pear as for a 75’ oak that I had to climb and bring down a piece at a time.

Here it is down to just the main trunk. 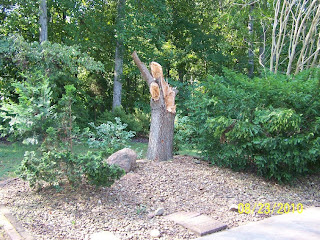 It took about 8 hours to cut up the logs, put on the woodpile, and clean up the mess. Here's the wood on the wood pile and each area is 6'x8' - I'll get about half again this much from the big pieces yet to be split. 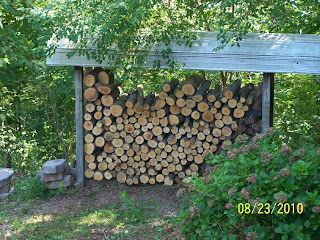 I left the trunk to use as an anchor to tie off and pull some of the crepe myrtle stems back toward it. Like all trees, it had been growing toward the sun and away from the Bradford pear. When I’m sure they will stay put on their own, I’ll cut down the trunk and split it for firewood - perhaps next spring. 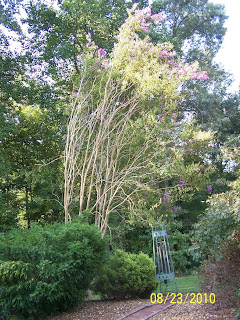 The one nice thing about the final morning was that it was only about 70* with a nice breeze with a hint of fall crispness, making the job a little easier. Finally, this is the last Bradford pear post unless lighting strikes the remaining trunk.