After reading many of your blogs, I realized that doing everything possible prior to Thanksgiving Day made a lot of sense, even some finished dishes.

Tuesday
I made the gravy using Debby’s method from A Feast For The Eyes – check her blog for the recipe and lots of photos.  I made the stock per her recipe then made up a double recipe of delicious gravy. 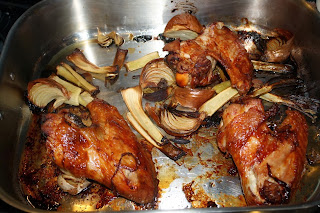 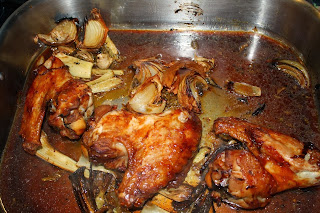 I made the turkey brine using a recipe from Chris at Nibble Me This, but omitted the final two ingredients. I fried up bacon for several dishes and whipped up some Alfredo Sauce for the Brussels sprouts hash.

Wednesday
Eric, Ann, Matthew, and Sophia came in late Tuesday and Bev decided to start off Wed. by making up a batch of pepperoni rolls with the aid of the grandkids. 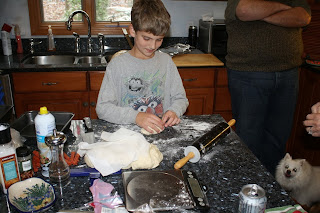 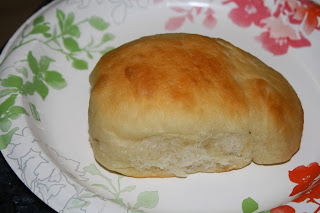 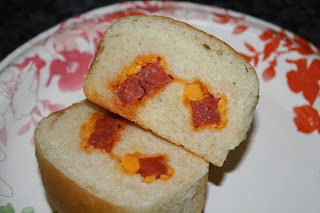 Then with help from Eric, we prepped the turkey and added it to the brine, made up the herbed butter and turkey baste, mixed up the crock pot dressing except for the dried bread, chopped up extra fresh herbs, and made the roasted vegetable sauce.  Bev made up the rolls and we had all but a few things ready to go.

When we got this done, my buddy Joe came over, and we did as much damage as we could to the 10 dozen oysters Eric brought with him from Maryland.  After some Oysters Rockefeller for Bev and Ann, us guys had a raw tasting of the four varieties we had: Blue Points, Chincoteague, Sewansescott, and Maryland.  After three rounds, I rated the Blue Points first and the Maryland’s last with the other two in the middle but the Chincoteague’s were very salty.  Even though there was one ranked fourth, I have to say they were all plenty good raw or made into more Rockefellers.

Thursday
For Thanksgiving morning, we only had a few chores to do.  First was to rinse and dry the brined bird, add the herb butter under the skin then pop it in the 250* smoker for about 4 hours. 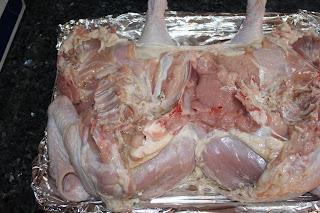 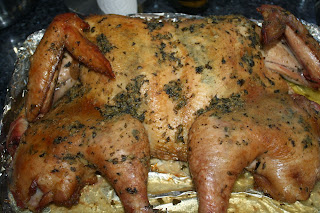 Then we cut up the turnips, sweet potatoes, celery, carrots, winter squash, and parsnips for roasted root vegetables using the recipe from Drick’s Rambling Café.  We cubed sweet potatoes and sliced Brussels sprouts for the hash using the same recipe as previously - I’d never seen them in the store on the stock like this so I had to buy one. 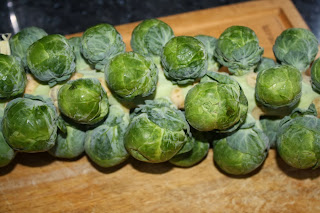 Finally, I added the bread to the other dressing ingredients and started them in the crock pot for the four cook on low.

Friend, Ashley, brought the salad, and SIL, Pat brought the mashed potatoes using the Pioneer Woman’s recipe and we kept them warm in a crock pot.  We served buffet style and this is my plate. 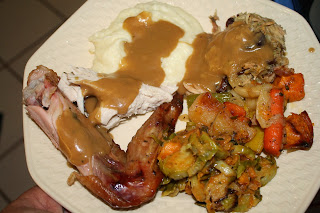 We finished the meal off with homemade pumpkin pies provided by daughter, Wende.

I liked everything we had and others seemed to enjoy the meal as well – even Wende liked the hash and she doesn’t care for Brussels sprouts.  The only things I’d change was to reduce the Crasins in the dressing from two cups to one as it was a little sweet for my taste and orient the turkey in the smoker so that the dark meat was closest to the heat as, while the breast was meat was perfect, the dark could have cooked a little more.  Please click on the various links for recipes and the pictures I failed to take.

I’ve posted a couple of recipes below so I’ll have them on my blog.

Grease a 6 quart slow cooker (for the double recipe)
Combine first 12 ingredients, transfer to slow cooker and top with butter.
Cook covered on high for 1 hour & low for 3 hours – do not remove lid.