A Not So Traditional Christmas Meal – Rib Eye Steak

With Madison gone to California for the holidays, Bev and I decided we would be into the bah-humbug mode and do virtually nothing for Christmas except relax.  Madison ready to travel. 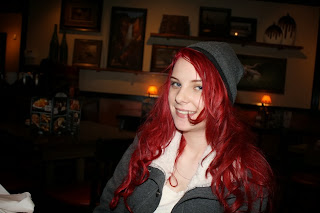 Then we realized a couple of friends would be home alone and daughter Wende would be coming down.  Then we remembered our neighbors had been wanting to get together and play some cards and all of a sudden, it was eight for dinner.

However, we still decided to keep it simple by grilling some steaks, and siding them with Penny’s cheesy scalloped potatoes, a salad provided by one of the guests, and hot rolls.  I  had BBQ’d on Dec 22 and cooked some items for friends including smoking a rib roast.  I just bought the whole rib eye, smoked his 10” piece and cut the remainder into steaks and after adding a couple from the freezer we had plenty of meat.

I couldn’t find a USDA grade on the package and feared I may have ended up with select, but after cutting the steaks, they looked more like prime.  So I looked harder at the package and found the choice rating then did a little on line research and discovered Butchers Block is a Sysco (food service company) brand.

In keeping with our plan, the steaks were simple – give them a not to heavy coat of Montreal Steak Seasoning on both sides and let them set on the kitchen counter for about four hours (don’t tell the food police). 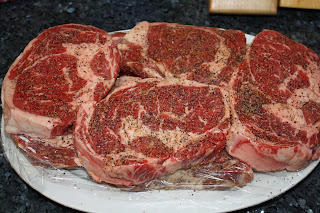 Grill over charcoal to either red or pink – that seems to be as close as I can get anymore and a couple of folks still had to trade, but everyone thought they were great.  I will definitely be heading back for some more – even though I’m still trying to empty the freezer.

We made Penny’s Cheesy Scalloped Potatoes for our friends meal  a couple of weeks ago and liked them so well, we decided to have them again for Christmas – who doesn’t like cheesy potatoes.  Her recipe is for two and since I adapted it for eight, I thought I’d post it on here so I can have a record of it.  I just multiplied the ingredients by eight then amended the directions a little.

Heat oil in 12-inch sauté pan over medium heat until shimmering, add onion and cook until lightly browned, about 15 minutes.  Stir in garlic and thyme and cook until fragrant, about 60 seconds.  Add broth, cream, potatoes, salt, and pepper and bring to boil.  Reduce heat to medium-low, cover, and simmer until potatoes are nearly tender.

Off heat, stir in cheddar mixture and press potatoes into even layer in a greased casserole dish.  Sprinkle Parmesan mixture evenly over top and bake until golden brown and bubbly.  Let potatoes cool on wire rack for 10 minutes.  (I made the dish up early and added the Parmesan just before they went into the oven).

I had a lot going on at serving time and didn’t get any finished shots so go back up and look at that raw meat again J.

We finished up with dessert provided by one of the guests and had a couple of four-person card games – it was a very good way to spend Christmas day with much less work and anxiety than the usual big meal.