Our neighbor, Steve, loves Salisbury steak but apparently only gets it via a TV dinner and since we also really like it, we decided to invite them down for our version.  We once again used the recipe for SalisburySteak with Mushroom Gravy from Lynda’s Recipe Box – please stop by Lynda’s site for the recipe and photos.

Before discussing the meal, here's a little history of the dish.  It was named for Dr. James Henry Salisbury who encouraged it during the Civil War because he considered minced beef as health food.  The term Salisbury steak was first recorded in 1897 but really came into full usage during World War I when patriotic Americans wanted a substitute for the German word hamburger.

I followed Lynda's recipe except I made six 8 oz. steaks and a double recipe of gravy using both button and cremini mushrooms.

We sided the steak with some Pioneer Woman mashed potatoes, buttered peas, buttered carrots, and hot rolls.  I wanted to serve Steve's in a sectioned aluminum TV dinner tray, but didn't want to go to town and try to find them.

We made the potatoes and gravy a little ahead of time and kept them warm on the cook top. 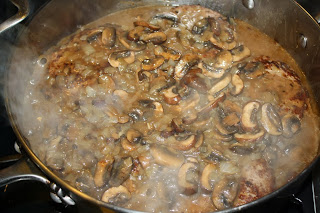 I used a pot for the potatoes, a skillet for the gravy, two skillets to cook the meat and two pots for the veggies – steamed in a little seasoned chicken broth until tender then buttered.  We rarely use all of the eyes on the range, but it's nice when we need them - this is just before the cooking started. 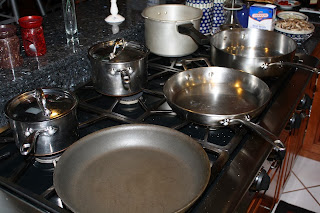 This is the finished platter of steak and the extra gravy was served on the side. 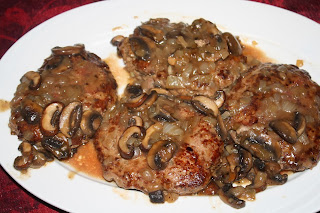 Just as I was ready to shoot my plate, the camera battery was dead and I resorted to Bev’s phone - I knew I needed to charge that thing occasionally.  My meal looked even better than the shot of it shows. 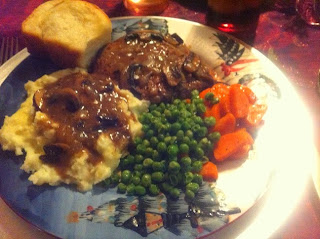 The meal was a success and Steve said it was the best TV dinner he’d ever eaten and I certainly agreed (I ate many as a kid and considered them and pot pies a treat).