We normally have a dock opening party earlier in May but we were out of town and so we had it a little late. Also, for my May BBQ day, I cooked a slab of ribs for friends Ron and Nancy and he reported they were the best I’d done. Since I’m a big fan of taste tests, we decided to combine everything and invite some friends over for a rib tasting at the dock as the season opener.

For the test, I cooked four slabs of similar weight, similar aged, from-the-freezer, loin back ribs at 230* for 6 hours. I rotated them within the smoker to provide equal heat and smoke exposure. The four slabs were treated as follows:

The glaze was brushed on both sides of the slab at the 5½ hour mark, then again to the top side only when removed from the smoker (except Slab 4, which got a single, top side coat of Gates just before slicing, so it had about 1/3 the sauce of the others). They were then wrapped in foil and placed in a cooler until supper time (about an hour and a half).

At serving time, I sliced the slabs into individual ribs so each person could have one of each.  I put an A, B, C, D on each plate so the tasters could keep them organized and the plates of ribs were also labeled.  I asks them to sample a bite or two from each rib and rank them before proceeding with the rest of the meal.  Here is rib plate "A" and my plate. 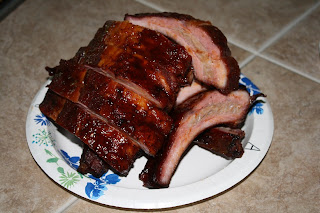 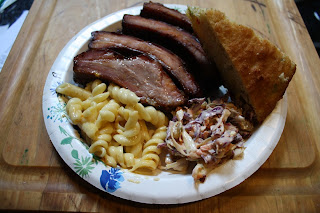 Here are the somewhat surprising results and nearly everyone commented they were all very good, so the number difference doesn't mean last place was bad, just the others were preferred. When I tasted, I had no trouble deciding my number 4, but a lot of trouble separating 1, 2, & 3.

The winner was the same one I'd cooked for Ron and Nancy on the May BBQ day - I'll pay careful attention to their opinions from now on.   Note there was a big difference between the first two and the second two, which surprised me since B & C had the same sauce on them - shows the importance of the rub and sauce working together.  Another surprise was that what I'd been cooking, and thought was really good, came in last - even from me.  I didn't show the individual results, but friend Joe was the only one who matched up with the final groups rankings - I'd better pay attention to his opinion too.

So I guess I'll be placing an order for the Head Country rub and making a bigger batch of Pioneer Woman's sauce, but with a little more heat.

The remainder of the meal included some very cheesy mac & cheese (a favorite recipe for a crowd), regular and Mexican cornbread, blue cheese slaw (more later on this) and several delicious desserts brought by the guests.  Here's a few more shots of food and folks taken by guest photoghapher Laurie. 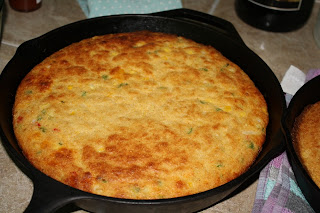 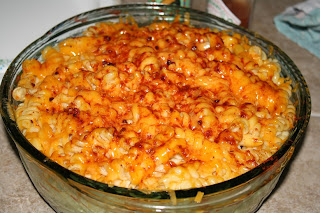 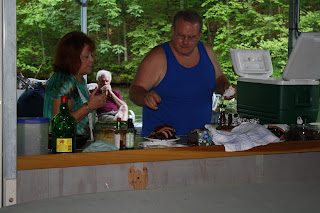 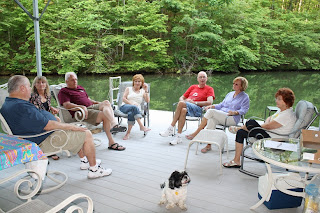 Check out Sweetie Pie (seated white dog) while I sliced the ribs - her Mama didn't raise no dummy. 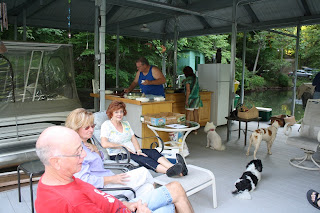 While in Zeb's in North Conway, NH, my one puchase was this Redneck Wine Glass which I bought to be able to serve Yankee import friend Laurie - be sure to blow it up. 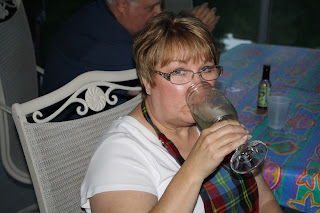 It also includes a lid and ring and no self respecting Southern household should be without one or some.  We topped the evening off by sending everyone home with a pint of the maple syrup we brought home from New Hampshire.

I've tried to comment to many of your blogs, but for some reason when I have to select and enter Google as my profile, then sign in with Google, then publish my comment, it takes we back to the Google sign in and I'm in a do-loop.  Any help appreciated.  No problem for those I don't have to select a profile.

One year ago:  Restaurante Italiano