I eat very little fast food, except when on the road, but there are a few places I actually make an effort to go to and Bojangles is one of them. I believe I’ve had chicken and biscuit from every fast chicken place in America and I really enjoy both at Bojangles – as does Bev. So, when we went to Walmart in Lenoir City the other day, about lunch time, a stop at the local Bojangles, located just across the road, was in order and as usual I enjoyed my lunch. 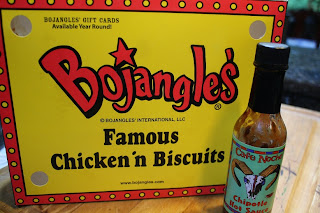 Since we had both chicken and biscuits leftover, I decided to see what I could make for breakfast. As with most fried chicken, it’s all about the coating on the skin and it just had to be used in this dish, but it was no longer nice and crispy. So the first order of business was to remove it, chop, and sauté in a little oil to re-crisp – I tossed in some chopped green onion as well. 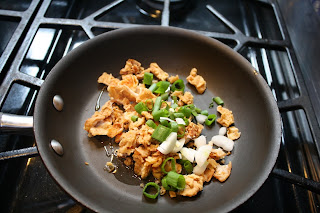 While this was cooking, I removed the meat from the breast and diced it, and beat up a couple of eggs with a little half and half and a few shots of Cafe Noche Chipotle Hot Sauce (from our trip to New Hampshire). The trip to Walmart had been to get these eggs, which we believe are the best around. 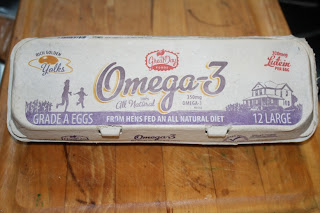 When the skin was crisp, I added the chicken to the pan. 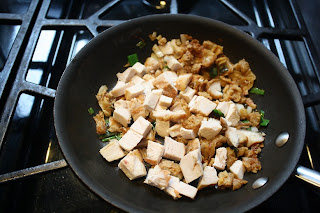 And when it was warm, I added the eggs and scrambled.  I had split the biscuit, added a little smoked Gouda, and warmed in the toaster oven until almost melted. 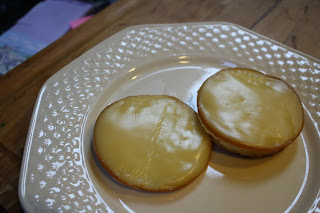 I topped the biscuit with the eggs, a little more green onion tops, and got this. 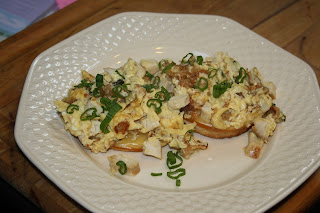 Most of my breakfast creations are pretty good, some are very good, but this was OMG good, with the chicken skin and coating, and the smoked cheese being critical elements – so don’t try and make this healthy.  It's hard to believe I went this long without a breakfast post - I appologize to my breakfast readers.

From a nature standpoint, when we returned from New England, we believed the Cicada's peak had passed and boy were we wrong.  This last week, they were so noisy during the day, we had to raise our voices to talk outside and they often made us think a nearby home alarm was sounding.  They are everywhere and thick in the trees - both the leaves and the trunks. 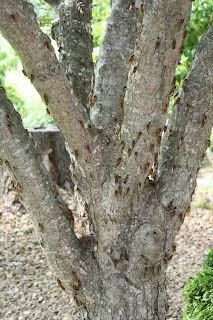 I'd mentioned before that they were considered food in some cultures around the world and discovered the same is true at Almost heaven South.  As he accompanied me to get the papers, our old man dog, Cody, pretty well cleaned the driveway of them and he didn't care if they were dead or crawling around, he just gobbled them up.  They don't seem to be hurting him so perhaps they are just another source of protein.

One year ago: Breakfast From The Frig