We made this dish back in May and liked it so well we wanted to make it for the kids – remember Rhett’s request was cook him stuff he’s seen on my blog. They decided to leave on their trip to Disney World a half day early, so we made the dish for lunch and sided it with some garlic cheese Naan bread, left from another meal.

Following is Ina Garten’s recipe for Linguine With Shrimp Scampi, which we doubled for this meal.

Directions
Drizzle some oil in a large pot of boiling salted water, add 1 tablespoon of salt and the linguine, and cook for 7 to 10 minutes, or according to the directions on the package.

Meanwhile, in another large (12-inch), heavy-bottomed pan, melt the butter and olive oil over medium-low heat. Add the garlic. Saute for 1 minute. Be careful, the garlic burns easily! Add the shrimp, 1 1/2 teaspoons of salt, and the pepper and saute until the shrimp have just turned pink, about 5 minutes, stirring often (we tossed in some grape tomatoes that needed to be used). Remove from the heat, add the parsley, lemon zest, lemon juice, lemon slices, and red pepper flakes. Toss to combine.

When the pasta is done, drain the cooked linguine and then put it back in the pot. Immediately add the shrimp and sauce, toss well, and serve. We decided to serve family style today, so here's the big bowl full. 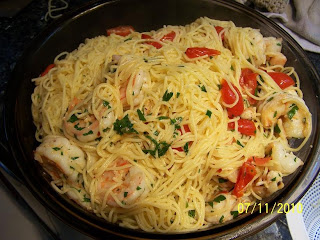 For the bread, we ran 4 garlic cloves through the press and into about 5 tbsps of melted butter and brushed it on the 2 pieces of bread. Then gave it a light sprinkling of five-blend cheese (couldn’t find the mozzarella) and grated parmesan and put it under the broiler until the cheese melted.

Here’s my plate and once again it was delicious and the bread was a major hit – and I did it off the top of my head, so maybe I’m still making some progress toward being a little more creative. 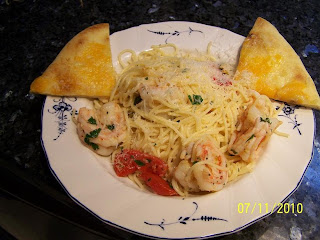 Time to get the canner cleaned up, it won’t be long now. 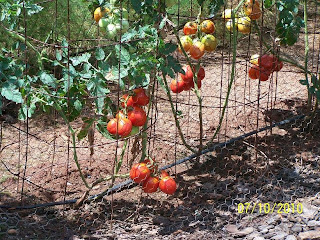