We went out for lunch and decided on lighter fare for supper – a nice salad. This seemed especially appealing in light of all of the great looking salads you all have been blogging about. Daughter Wende had swung by after work to pick up some things and ate with us, so Bev whipped up a big bowl of undressed salad and it was up to each person to build their own from there. We also reheated and sliced the pork tenderloin left from supper the other night. I chose Italian dressing (we didn’t have any Greek made up) and added the meat, green and kalamata olives, and Feta cheese. It was delicious and the healthiest meal of the day. 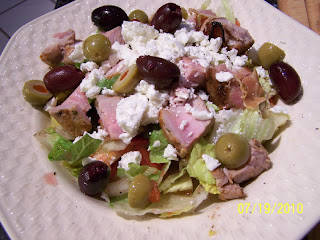 The meat was still pink and juicy. 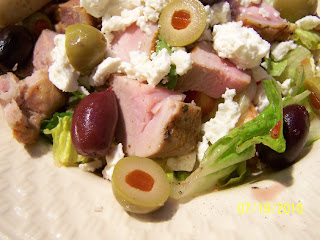 We had also laid in another loaf of ciabatta bread the other day and Bev painted on some garlic butter and toasted it to go along with the salad. I don't know how long this bread has been available to me, but I sure am glad we finally discovered it - next step is to get the family baker to try her hand and making it. 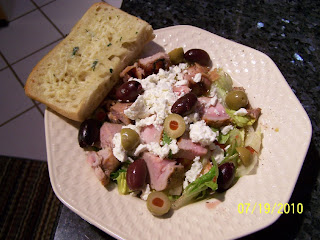 Mayo comparison update from July 17. My daughter, Wende, is a regular reader of my blog and over dinner mentioned that she preferred Duke’s mayo, which she discovered while going to school in Greensboro, NC. And since both it and the Hellman’s were now cold, we decided on another taste test, however I noticed that our Hellman’s was with olive oil. At any rate, we all still thought the Dukes was slightly more tangy, but I believe in a dish or on a sandwich, I’d have a hard time telling them apart. According to the label, the Dukes has a little more than twice the fat, which is obviously a negative and since Wende said she thought the Hellmans would usually be cheaper, I guess I’ll stick with it – I’ve only been eating it for about 60 years, but I was at least willing to consider an option. Here's some info you'll probably need to get thru life. From Wikipedia: In 1905, Richard Hellmann from Vetschau, Germany, opened a delicatessen on Columbus Avenue in New York City, where he used his wife's recipe to sell the first ready-made mayonnaise. It became so popular that he began selling it in bulk to other stores. In 1912 he built a factory for producing Mrs. Hellmann's mayonnaise in jars. It was mass marketed and called Hellmann's Blue Ribbon Mayonnaise. It was so successful, Hellmann closed his delicatessen by 1917 in order to devote full time to his mayonnaise business. While Hellmann's Mayonnaise thrived on the East Coast, the California company Best Foods introduced their own mayonnaise. Best Foods Mayonnaise became popular on the West Coast. In 1932, Best Foods bought out the Hellmann's brand. By then both mayonnaises had such commanding market shares in their respective halves of the country that the company decided that both brands and recipes be preserved. To this day: · Best Foods Mayonnaise is only sold west of the Rocky Mountains, specifically, in or west of Montana, Wyoming, Colorado, and New Mexico. · Hellmann's is sold east of the Rockies, specifically, in or east of North Dakota, South Dakota, Nebraska, Kansas, Oklahoma, and Texas. Duke's Mayonnaise is a popular product in the southeastern United States and an integral part of regional favorites such as tomato sandwiches, cole slaw, and potato salad. It was created by Mrs. Eugenia Duke of Greenville, South Carolina, in 1917. Since its creation Duke's has never changed the original recipe. The product is unique among similar condiments in that it is completely natural and contains no sugar. As such, many southern cooks and chefs use only Duke's in their kitchens as it offers a more traditional, less sweet taste than other mayos. C.F. Sauer Company purchased the Duke's Products in 1929. Aren't you glad you took the time to read that. Have a great day and thanks for stopping by. Larry
Posted by Big Dude at 6:20 AM