I was at the doctor this past week having some tests run and I’m generally very careful with keeping my hands washed, but apparently not this time. I caught a pretty bad head cold and since I was nowhere else, can only assume I touched the one infected doorknob then rubbed my eyes. And of course, this happened just as the Fort Knox bound kids pulled in from their trip to Disney World. So, I’ve spent two days holed up in the bedroom sucking down Tylenol Cold and Flu – which does a great job of symptom relief for me – drinking lots of water and eating little.

I felt much better this morning and was hungry for some of the fried grits I’d been saving from Fridays post (I’d actually cooked them a couple of days before) and since I’m planning to BBQ tonight and tomorrow, I decided cooking breakfast would be a good wellness-for-cooking-test. I decided to side the grits with scrambled eggs and while getting them out, I discovered a little bag of left over home fried potatoes with peppers, onions, and venison salami. Being the health conscious eater that I am, I decided they would provide the meat and veggies I needed for a well-rounded meal :-).

I used a cast iron skillet and olive oil for the grits, but they stuck to the pan and then fell apart as I was removing them, so next time, I’ll dust with flour and cook in the non stick skillet with a combo of oil and butter. This way they should hold together better, be a more golden color and create less grease spatter – my glasses needed a major cleaning when I got done. Here’s my plate and while the grits aren’t pretty, they were very good – at least as far as my head-cold limited taster could tell. I added a little shredded cheddar to the eggs and potatotes - dairy for my well rounded meal. 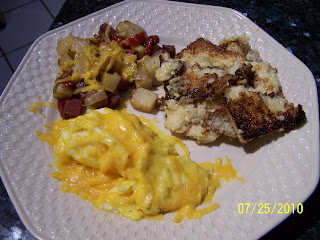 Rhett and two of his kids ate them for the very first time and liked them.