The other day we were watching “Boy Meets Grill” and Bobby Flay made a grilled ratatouille that looked delicious, to which Bev commented “we should make that.” I asked and she advised she’d just been to the veggie market and had all of the ingredients he used. Here’s his recipe:

Place all cut vegetables and the tomatoes in a large shallow baking dish, add the 1/2 cup of olive oil, and toss to coat. Season with salt and pepper, to taste. Place the vegetables on the grill and cook for 5 to 6 minutes, turning halfway through the cooking time. Remove the tomatoes, cover grill, and cook the remaining vegetables for 2 minutes, or until almost cooked through. Transfer vegetables to a cutting board and coarsely chop (leave tomatoes whole). Place the chopped vegetables and tomatoes in a large bowl, add the 2 tablespoons of olive oil, garlic, oregano and parsley and season with salt and pepper, to taste. Serve at room temperature.

We followed his grilling recipe, except used our paste tomatoes. For the dressing Bev added some extra garlic and decided some kalamata olives and grated romano cheese would be an improvement - and it was. 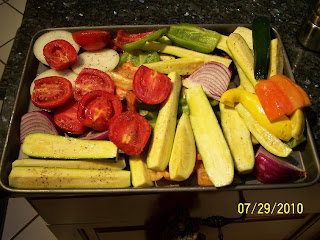 The veggies about ready to come off the grill - I got the eggplant a little too done. 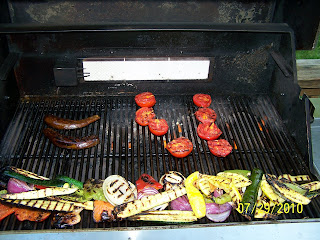 He cooked his with lamb, but we decided on shrimp and I just made extra of the dressing and brushed it on the shrimp along with some salt, pepper and a little lemon. 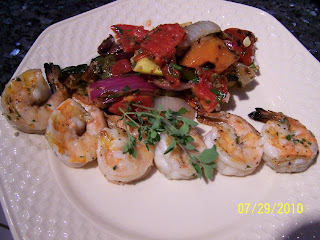 All and all a pretty good dinner.

While I was prepping some tomatoes yesterday afternoon, I was watching Tyler Florence make chicken fried steak and the next show to come on was Julia Child. After watching a few minutes, I couldn't help but wonder how far she'd get today on "The Next Food Network Star" - not very I suspect.