Since we planted blueberry varieties that ripen at different times, we’ve been enjoying them for about three weeks so far and the final bush is still loaded. While we’re not berried-out yet (just had some for breakfast), we had no specific plans for these that Bev picked this morning, so we decided to freeze them for later enjoyment. I read several sites on the subject with one saying wash thoroughly and others saying not to wash. Since we know there are no chemicals on them I went with the no wash option. I just spread them on a jelly role pan and stuck them in the freezer for a couple of hours - they turned into marbles, then quickly bagged them in a quart ziptop freezer bag - so we can get in the bag to get what we want and easily reseal. 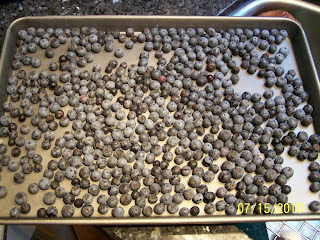 While we’ve been getting enough tomatoes to eat since late June, this is the first major picking of mostly paste tomatoes for canning. I basically just picked the bottom cluster from each plant. It takes a full peach basket (half bushel) to make a full 7 quart canner run and I’m a little short (need about 20 more), so I washed these up and in a couple of days there should be enough. Is “doing a run of tomatoes” (or beans, etc) a Southern term or East Tennessee term or maybe just a neighborhood term? 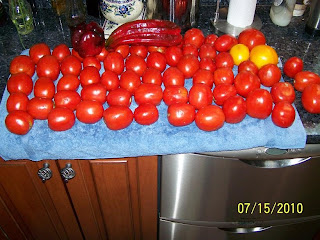 I was asked earlier about the term paste tomato and what varieties I grew. First the terms paste, plum, Roma, and maybe some others get used interchangeably but in the seed catalogs, they are generally all listed under “Paste Tomatoes” and Roma is an actual variety. After many, many trials, the two varieties I’ve settled on are Kada Hybrid and Quimbaya both of which I get the seeds for from Totally Tomatoes. I like these because of their size, high amount of pulp to low amount of water, and their reliable, heavy crop. Here is a picture that shows the size difference - from left: Kada (I admit this one is unusually large), Quimbaya, Roma (not an actual Roma but about the same size). A juice making post will be coming soon. 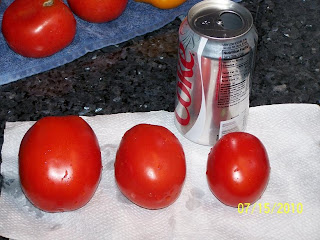 I also picked a couple of nice peppers, see picture 2 above – the elongated one is a Giant Marconi and I’m not sure about the bell variety. I pick them before they're completely ripe so the stop-growing-I've-made-seeds gene doesn't kick in.

I love sandwiches and yesterday I had a great reason to make one - ciabatta bread and lunch meat that needed to be eaten. So I cut just a little green off the bread and made a basic sandwich - deli ham, turkey & salami, sliced provalone cheese, some sliced olives, chopped green onion, mayo and mustard. I meant for the picture to not show the two bites I'd already taken from the other side. 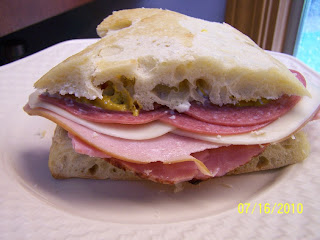 But there was something different - a mayo taste test. I like Hellmans mayo, not Kraft, not salad dressing, just Hellman's. I've made several attempts to make my own but am always disappointed when I compare them to Hellman's. But Duke's, which I'd never heard of, has been doing such a good job with recent advertising around here, they inspired me to buy a little squeeze bottle of it. The Hellman's was cold and the Dukes warm, which may have had a little taste impact, but Bev and I both thought they were very similar with the Duke's perhaps a little more tangy - which I liked. I'll try them again with both cold to see which I like, but for right now, I think I'd buy whichever is cheaper - and I'm surprised.