How often do I use the words “needed to be used” when it comes to ingredients in our dishes – pretty often. We had some portabella mushrooms in the fridge that needed to be used. Why is that you asked – okay I’ll tell you. Rhett’s youngest, Riley, is a PKU child, which means her body cannot tolerate protein. As a younger child it was virtually zero, but now she can eat just a little – the occasional egg or piece of cheese. If you think eating a low carb diet is difficult, try eating a no protein diet – it’s most of those foods you eat when you’re on the low card diet. It’s hard to believe how many foods contain soy beans or peanuts in some form. So for many years she’s been getting portabella mushrooms in place of meat and Bev had stocked up. Unfortunately Riley announced that she was tired of eating them – so we have some we needed to use.

I got up thinking I’d have another bowl of Grape Nuts and berries, but I could smell the bacon cooking before I got to the kitchen and when I got there Bev said she was fixing an omelet – I didn’t have to asked why. She sautéed the veggies that needed it, then poured the eggs over them and cooked the whole thing in the pan with a lid on it. It had onions, mushrooms, chicken (leftover beer can that needed to be used), bacon, cheese (the last of the 5 cheese blend that needed to be used) and scallions. I guess it was actually a fritatta, but it looked and tasted like an omelet that didn’t get folded over – hence open faced. Whatever it's called, it was delicious. 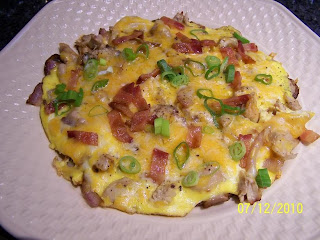 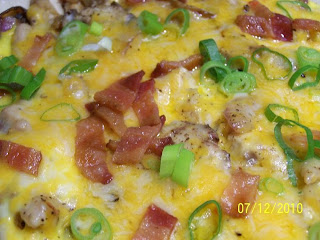 But we still have more mushrooms that need to be used.

This post originally ended with the sentence above, but when Bev got in from a doctors appointment, she decided we'd best use the piece of dough left over from our recent pizza party . We decided on Greek again and she used the dough and more of the beer can chicken, but no mushrooms. I cooked it on the grill again and forgot to mention the other day, that when it goes back on the grill (after topping) over low direct heat, the bottom crust must be watched carefully. Here's a shot of the crust bottom and it could have gone a little longer, but it passed both tests - brown and crispy. Also, we give both sides a good oil coating to prevent sticking. I laid on the floor and shot up while Bev held the piece of pizza. 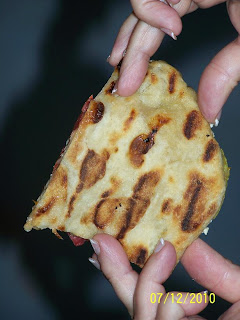 If the crust gets done before the the toppings are ready, merely finish it over indirect heat while keeping the grill (with the lid down) in the 300* range. I usually use the gas grill and have the outside burners on high while I cook the pizza over the center burners on low, so to finish the toppings, I just turn off the burners under the crust. This one could have benefitted from that treatment, but I was having grill burner issues. It was more like warmed fresh veggies than cooked ones. 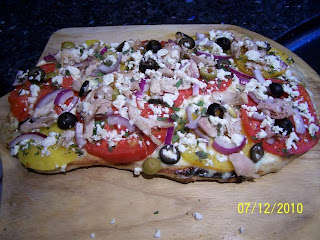 It was still delicious, except we now have more leftovers to deal with - but leftover pizza generally goes pretty fast around here. I'll be surprized if it survives the day. Needless to say, it was a salad for supper.