Beverly Is A Hero This Morning

For the past several days, we’ve been leaving the car parked outside the garage and in the shade of the Bradford Pear near the driveway. Last night after I went to bed, the weather service was predicting some heavy storms and Bev decided it would be best to move the car into the garage. Around 1am, the storms blew through and I guess we had some good winds – it was raining so hard I couldn’t tell rain noise from wind noise, but I remember wondering if the windows were up in the car. When I went out to get the paper this morning, this is what I found. 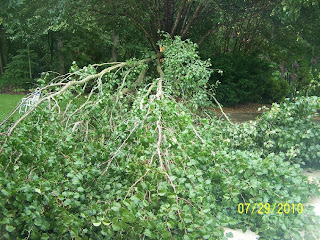 The car had been sitting just in front of the little trailer and while these weren’t giant limbs, I’m sure they would have hurt it. 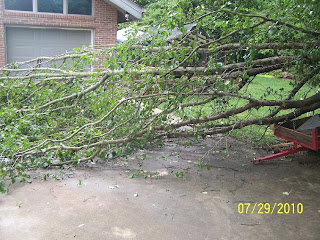 One of the ironic things is that after sitting in the house since last fall, just a few weeks ago, I finally got around to hanging the wind chime that’s sitting in the trailer. I also trimmed several of the lower limbs from the tree and considered removing some more, including one of these that broke. 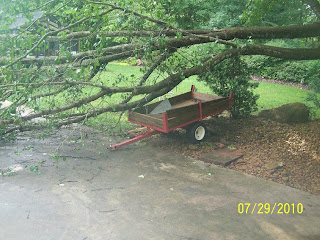 I can’t tell if the trailer got hurt or not, but I wish it had been where it belongs – you’d think I’d learn. 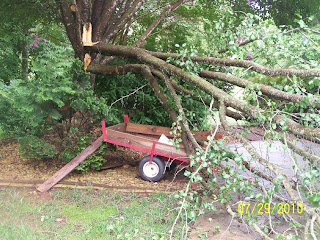 For years we’ve been wondering how this tree (planted about 17 years ago), with its very week trunk structure, has been able to get so big without damage, we won’t have to worry about that any longer. The question now is whether or not the tree will survive. On a positive note, we got about an inch and a half of much needed rain. Well, guess I have some tree work to do.