You may remember that rather than the typical Thanksgiving meal, we had Gumbo but we found we missed the leftover turkey dishes we normally enjoy so we bought a 12 pound turkey and an 8 pound breast in mid-December.  I seasoned them then cooked with orange, lemon, and onion slices and chopped celery.  I roasted them in a 350F oven, covered then uncovered, to an internal temperature of 160F. 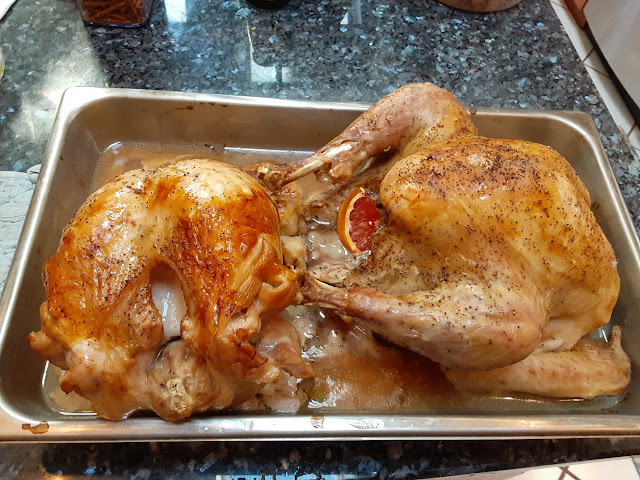 After cooling, I removed a breast from the turkey for Bev to make the sandwiches she enjoys then removed all of the meat I could get off yielding several pounds which we bagged and froze for the upcoming dishes.

Then, I added all of the bones and scrapes to a large pot, covered them with water and cooked on low simmer all night to make broth.  After removing the solids from the pot, Bev picked through it and ended up with 1¼ pounds of meat for the dogs – hard to believe I left that much on the carcasses – plus we ended up with five quarts of very rich broth. 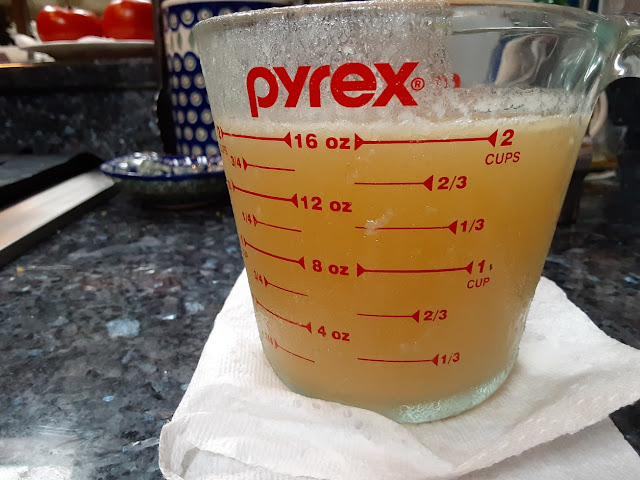 The first dish we made from the turkey meat and some of the broth was pot pie (or maybe a casserole since it had no bottom crust) using a recipe from Taste Of Home but we made the expanded recipe shown below so we could use it for our Thursday night meal for our friends.  You can click on the link for the original recipe which makes two 9” pies.  Shown below is the double recipe for two of the 9”x11” pies plus a smaller one.

1. Preheat oven to 425°. Place potatoes and carrots in a large saucepan; add water to cover. Bring to a boil. Reduce heat; cook, covered, 8-10 minutes or until crisp-tender; drain.

3. Stir in flour and seasonings until blended and cook for a few minutes.

4. Gradually stir in broth and milk. Bring to a boil, stirring constantly; cook and stir 2 minutes or until thickened. 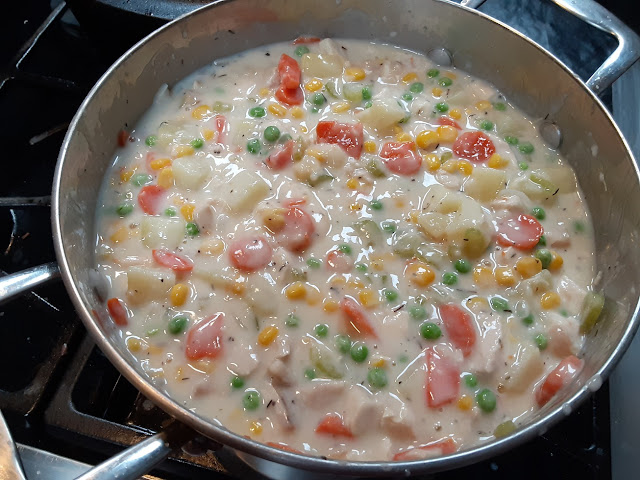 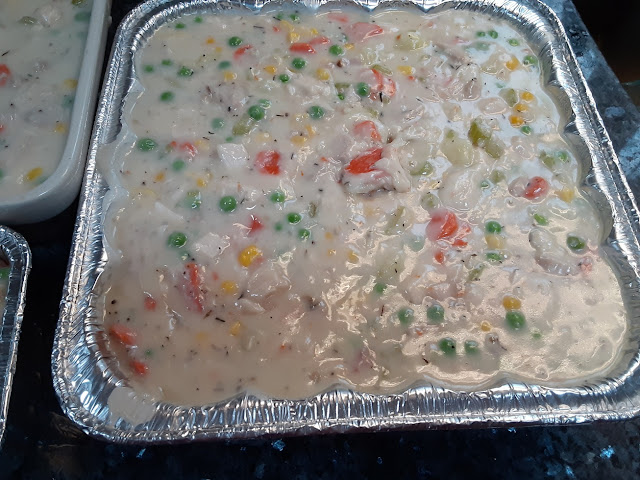 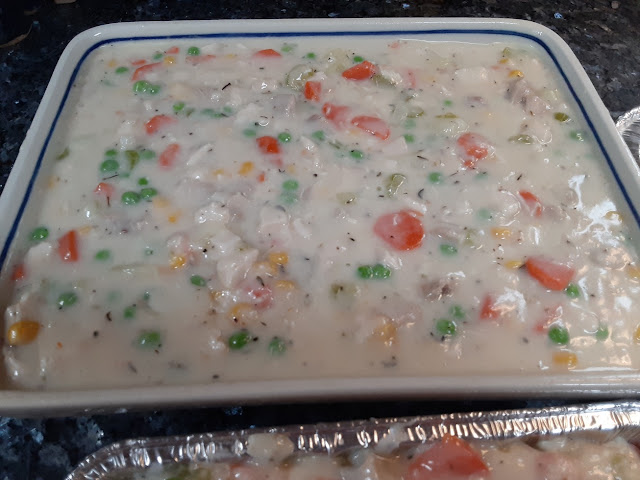 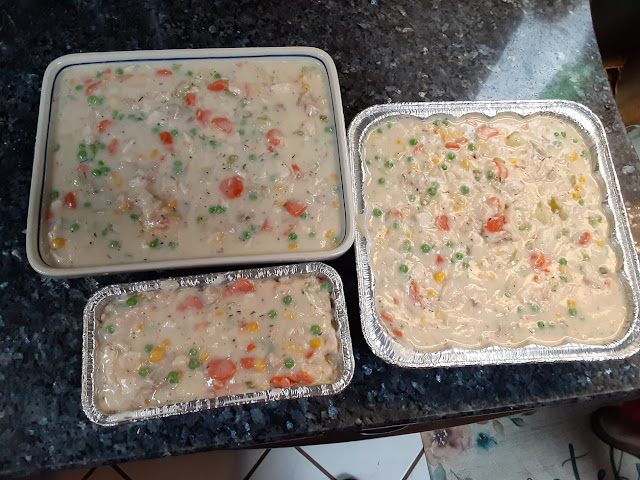 8. Unroll a pie crust into each of two 9-in. pie plates; trim even with rims. Add chicken mixture. Unroll crusts; place over filling, trim, seal and flute edges. Cut slits in tops.  Bev used the extra crust to add snow flakes to ours. 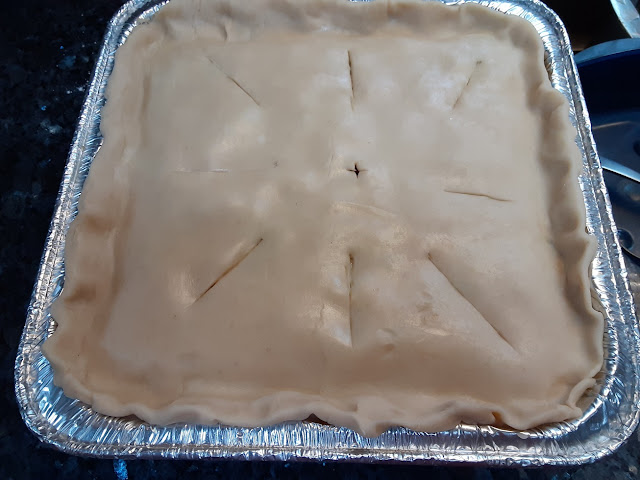 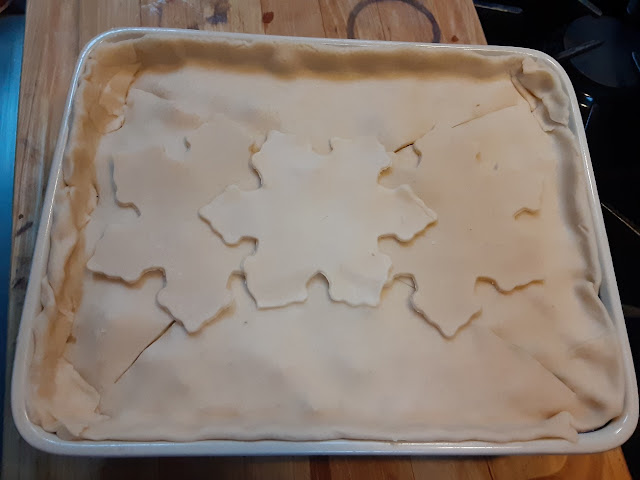 9. Bake 45 minutes or until crust is lightly browned. Let stand 15 minutes before cutting. 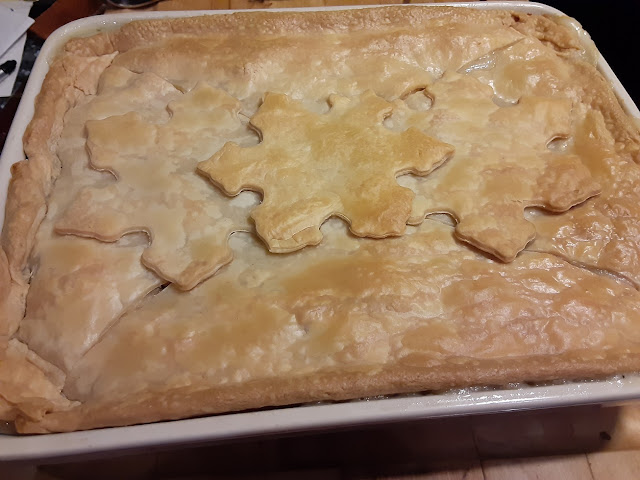 Since I used 9”x11” pans, we ended up with two of them and a smaller one which we gave to our neighbors.

We all thought the pot pie had a delicious and the right consistency – not too dry or too runny.  This will be our go too pot pie recipe going forward.  The friends that also got one of the casseroles said it was awesome - always good to hear that.  Next time I believe I will make a single recipe, add an additional cup of broth to thin it a little, omit the crust, and serve it over biscuits - oh my, makes me hungry just thinking about that.

Since the skies were gray and the temp hovered around 40F, I could not resist building a fire in the big upstairs fireplace, even though Bev doesn’t care for the mess – I’ll gladly vacuum the floors. 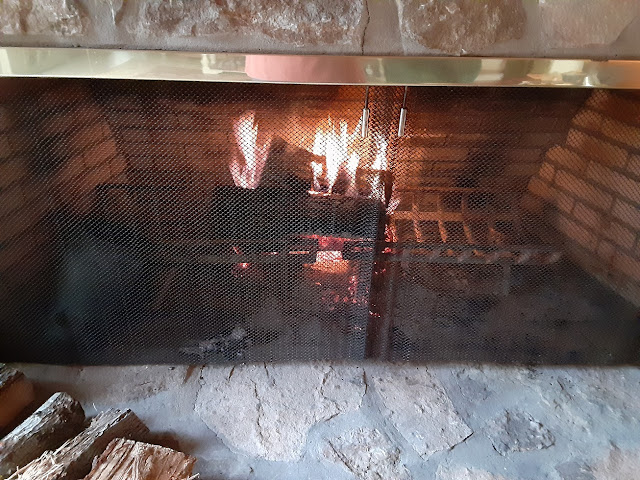