If you’re going to have leftovers to have to deal with, grilled, wild caught, sockeye salmon is a pretty good one.  When we grilled salmon for supper the other night, I intentionally cooked extra with the intent of making some salmon spread – I was ready for a fix, but Bev has become a big fan of salmon cakes.  Like me she grew up on them but they were made with canned salmon, some type of filler, beaten egg and not much else, so when we first tried Mary’s recipe over at one perfect bite we knew it was a keeper and this is our 4th time to have them.  If you use this recipe be careful not to add any salt until you’re sure you need it, especially if you use salted butter and Zatarain’s Pro Boil.


We also had some fresh corn and okra in the fridge that needed to be used.  We knew what to do with the okra (I really only like it one way), but hadn’t decided on the corn, then along came Mary’s recipe for Corn Fritters over at Deep South Dish – check her site for the recipe and pictures.
Bev followed the recipe but added some onion and green pepper and rather than clean up after deep frying, we just fried them in a skillet like pan cakes. 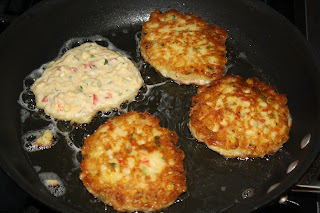 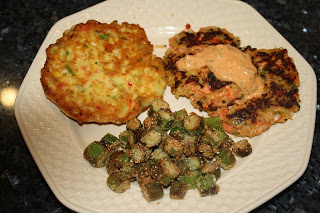 The salmon cakes and okra were delicious as always and we all agreed the corn fritters were a definite keeper and will be deep fried the next time - Bev was still talking about how much she liked them two days later.  Nothing like a fried everything meal to help the ole waistline - at least we didn't use bacon fat.
And the previous day, you know I had to try some of the salmon for breakfast. 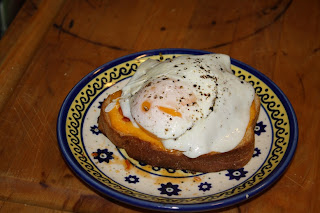 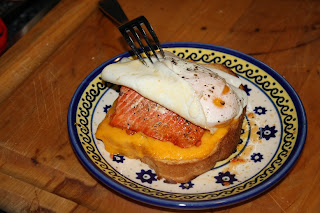 Ann Burrell may have become my new favorite on the Food network when I heard her say the other day - plunk an egg on just about anything and I'm a happy girl.
All photos can be enlarged by clicking on them.
Have a great day and thanks for stopping by Almost Heaven South.
One year ago:  Giving The Cat A Bath (Worth re-reading)
Larry
Posted by Big Dude at 4:15 AM