I’d posted a while back that son, Eric, and our nearest grandkids had moved to the Baltimore area so he and Matthew made a quick trip in this past weekend to pick up his canoe.  They were only here about 12 hours as they wanted to spend Saturday night camping on their way home.


Bev and I discussed several breakfast options and since he reads my blog, I wanted to give him one of my breakfast from leftovers, so he got a reheated salmon cake and corn fritter that was left from supper the previous night and or course the requisite fried egg.  Since he slept in Matthew and I ate first.


Matthew had his usual Meme breakfast of scrambled eggs, bacon, toast and, most importantly, chocolate milk. 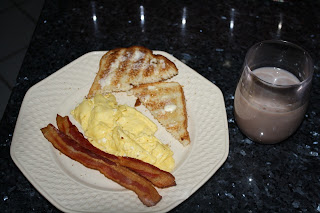 You healthy eaters may want to skip the next shot.  As is our norm, when cooking bacon, we cook the entire package then reheat it as needed, to minimize the number of bacon clean-ups.  Since the cook top was already dirty from last night I just cooked it there rather than outside, which generated a skillet of bacon grease.  Ever hear of basted eggs, they were the norm when I was a kid and are a sunny side up egg that has the top cooked by flipping the hot bacon grease on it with the spatula.  I only do this every 5 years or so as meat fat is the one thing I’m a little careful with, but I had to have two eggs, one of which went atop a corn fritter. 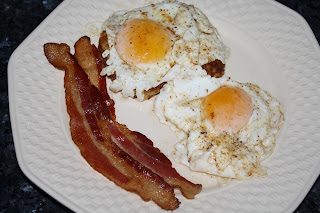 Then when Eric got up, I fixed his and he also had a basted egg. 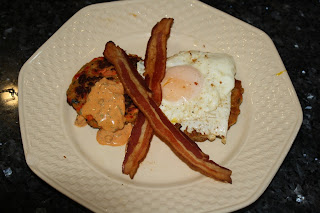 I was pretty sure this would get us through until lunch.
I know I’ve posted our canned goods many times, but wanted you to know that the stack of maters in the header shot made exactly 21 quarts of canned product – never had it come out just right before. 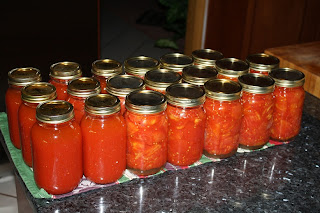 If you count the jars, you’ll only find 20 as we had another first - when I was removing the jars from the canner, the bottom of one of them broke off.  I suppose we’ve probably canned 1000 jars over the years and this has never happened before – oh well.
All photos can be enlarged by clicking on them.
Have a great day and thanks for stopping by Almost Heaven South.
One year ago:  Stuffed Bison Burger
Larry
Posted by Big Dude at 4:57 AM