We live about 16 miles from anyplace you could really call a town, 5 miles from Greenback, which is pretty much just a post office, two banks and a restaurant; and 6 miles from Vonore, which is a wide spot in the road. But in spite of its smallness, Vonore has Sloan’s which is a miniature combo of a Walmart and Home Depot – it’s an amazing little place and it has a great meat department. While they only sell select beef, they still buy good meat and their burger is renowned in the area – they buy packer cuts then butcher it themselves – can you believe this little store has at least six people working in the meat dept.

I buy as much of my meat from them as I can and like most stores they have a weekly discount flyer. The week before St. Patrick's Day, they had the cheapest corned beef around, choice Skylark brand for $2.99/lb, so I bought one for St. Patty's Day and one for pastrami.

I smoked the pastrami at 235* to an internal temp of 165, then put it in a foil pan, covered tightly with foil and cooked to an internal temp of 185*. Then I put it in a pre-warmed cooler to rest until dinner time. I normally pull it from the smoker at 175* then steam it to heat prior to slicing and serving, but we were eating it off the smoker for this meal.  As it turned out 185* was fine for the brisket flat, but the fattier point and the fat between the two needed to go another 10 degrees.  I believe I'll stick with pull at 175* and steam before serving from now on.  It still looked and tasted very good. 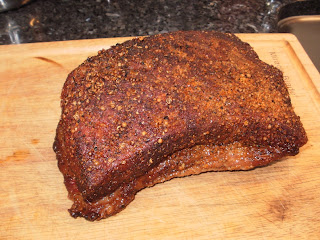 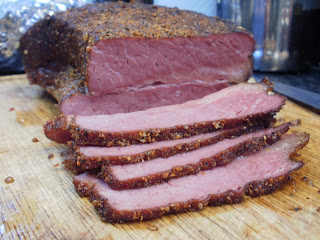 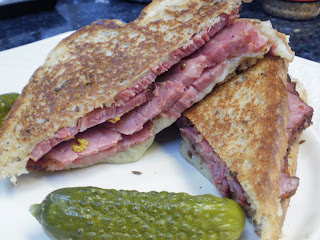 And remember, if you own a grill, you can smoke pastrami.
Since I not only had pastrami, but also some corned beef left for St. Patrick's day, I could not let Chris' (Nibble Me This)  Blue Max sandwich post pass by.  I made it pretty much like his except used dill havarti cheese as that's what I had and I grilled it in a pan with butter. 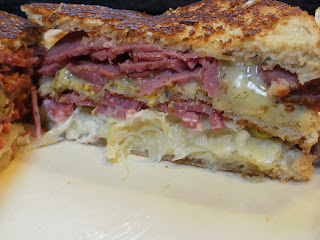 Even though I ate no lunch, I could only eat half of it - d%*n diet pills.  My only comment to Chris is "D%*n boy where you been keeping this thing" - it was outstanding.  The best part is I'll soon be making corned beef and pastrami again - d%*n Chris, what else you hidin?
Finally two great giveaways to tell you about.  Bo over at Bo's Bowl is giving away a very nice piece of Le Creuset cookware and Chris at Nibble Me This is giving away a neat book called the "The Encyclopedia Of Sandwiches".  Please hope over to their blogs for the details.
Have a great day and thanks for stopping by.
Larry﻿
Posted by Big Dude at 5:43 AM