These are just three topics I wanted to write about and decided to combine them.  Header shot is Fat Albert spruce on left, pink Patio Peach, and Yoshino Cherry behind.

After posting about this several times, I thought I should go ahead and put up the recipe. I would have done it earlier, but I had to use my three finger hunt-and-peck method to type it in. 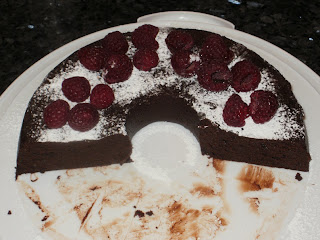 Melt chips and butter together in a bowl over boiling water and stir until well blended.

Beat eggs in a large bowl with a mixer on high for 7 minutes, or until tripled and soft peaks form. Fold in chocolate mixture until blended and pour into cake pan. Cover loosely with foil.

Place large pan inside oven, place cake pan inside it and pour boiling water into large pan halfway up the side of cake pan. Bake 40 minutes.

Cool cake pan on a wire rack. Cover and cool in fridge for 3 hours or until firm. Invert on a serving platter and shake down sharply to release cake. Peel off paper.

If you are a chocolate lover, I'm confident you'll enjoy this dessert.

After I read Velva’s post for a Cajun Bloody Mary over at Tomatoes On The Vine, I knew I had to try it, so on my next trip to the store, I got the only missing ingredient – pickled okra. Velva, I don’t know if you found this recipe or invented it, but I loved it. I used 1/8 tsp of the okra juice, 1/8 tsp of Fire Ant Juice, and my homemade tomato juice and beef stock. I tried ½ tsp of horseradish in the second one, but didn’t like it as well – I shouldn’t be fooling around with perfection. These things are like Salty Dogs – they go down real easy. I decided to make up the quart of tomato juice and ended up with this. 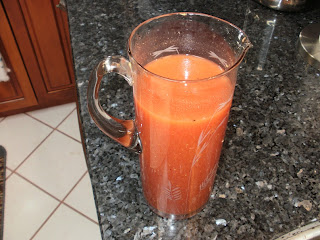 As I read the recipes on your blog, I often say “wow, I must try this”, so I put it on my “must-try” list and often forget to go back to it. It works much better if I can make the dish within a few days and it worked out with this one. Pam, over at Pam’s Midwest Kitchen Corner, recently posted her recipe for White Bean Soup With Andouille Sausage and as it happened I had the necessary ingredients - sorta.

I had some newly made smoked sausage and some kale that I’d purchased for another meal but didn’t use and these seemed close enough. From an ingredients standpoint I followed Pam's recipe except for these two (I used homemade chicken broth) but I cooked it on the stove. I didn’t pay attention to the fact that it was a crockpot meal, so without thought, I put by beans in water the night before to soak. Since they no longer needed an all-day cook, I just added everything to a pot over very low heat and cooked for about four and a half hours. 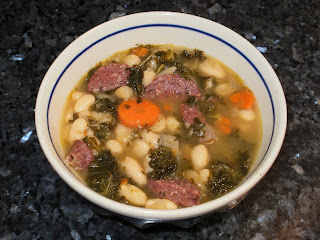 I added a little crushed red pepper and grated parmesan to mine to kick it up a little and it was delicious.

The next morning I had a bowl of reheated soup and a bloody mary from the pitcher.  Both were just as good or better the next day.  Thanks Velva and Pam for the recipes.