Jerk Pork On The Grill

Decided it was time for a food header.

Bev’s pronouncement that she wants to grill out more, coupled with my desire to improve my charcoal grilling skills, had me thinking in that direction for supper. I’d bougth a whole pork loin, as I usually do, when they were on sale, cut it into chops and roasts, vacuum packed, and tossed in the freezer. I had a request for smoked jerk chicken for my last BBQ day and still had plenty of the marinade left so it sounded like grilled jerk pork loin was the ticket.

I thawed the roast the day before and the morning off, I carved it into four 1¼“ chops – I could have gotten five or six thinner ones, but I like em thick. 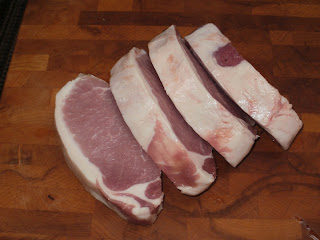 After trimming off some of the fat, I put them into a plastic bag with the jerk marinade for an eight hour soak. We’ve previously tried both a short and long marinade time and much prefer the longer time. I can’t recall if I posted the recipe and couldn’t find it, so here it is (again). I was out of allspice so ground some fresh berries, which really made a difference.

Preparation
1 - Chop the onions, garlic and peppers. These do not need to be chopped too fine as they will be liquefied by the blender.
2 - Blend all of the ingredients (excluding the pork) in a blender to make the jerk sauce.
3 - Cut the pork up in to smaller pieces.
4 - Use a fork to poke some holes in the pork pieces.
5 - Rub the sauce in to the meat, saving some for basting and dipping later.
6 - Leave the pork in the fridge to marinade overnight.

The last time I grilled over charcoal, I used too much and ended up with a really hot fire, so this time, after a fun afternoon of sausage stuffing, I fired up a half chimney.  I put the chops over dierct heat until I got a nice crust on each side, then moved over indirect to an internal temp of 145* (I like mine pink and juicy).  After moving them I tossed on what I hope is the last of the store bought asparagus for a while. 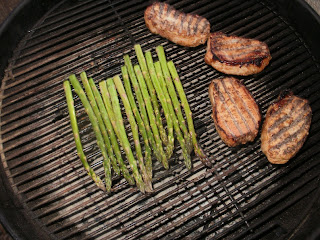 Then I added a side salad with remoulade to my plate. 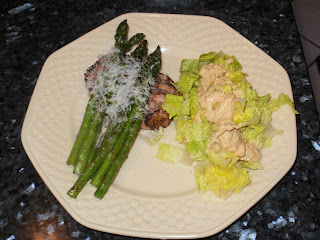 And much to my delight Bev made another Chocolate Truffle Cake and bought some raspberries. 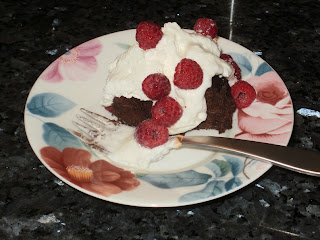 It was a pretty darn good meal and I think this is a first class jerk marinade.