When I first met Bev, she introduced me to several foods, such as peas and dumplings and boiled new potatoes fried in butter. My mom often boiled small potatoes to hand mash on your plate with butter, but I’d never had them fried whole in butter.

Before I continue let’s discuss small vs. new potatoes - I think I’ve covered this before, but I believe it’s worth repeating. Small potatoes are not necessarily new potatoes and large potatoes can be new. I had a veggie customer one time who had ordered new potatoes from me but was disappointed when they were a variety of sizes up to tennis ball. When potatoes are harvested by digging up the plant, there are tubers of all sizes including some small ones and they all come out of the ground at the same time and all cure over a short period of time.

When you go into the store and there is a display of large red potatoes beside a display of small ones label “new potatoes”, they likely came out of the ground about the same time, so they're unlikely to be new - this is what confused my customer.

There are two ways to tell if it’s a new potato – first it taste different – sweeter to me as the sugar hasn’t all turned to starch. Secondly, a new potato can hardly be washed without rubbing off some of the skin – especially if brand new like these - less than 30 minutes out of the ground.

These were harvested by digging under the plant with my hand to find the right size then pulling them out and putting back the soil.  This is known as graveling and doesn't disturb the plant or the other potatoes and since I grow potatoes mostly for the new ones with the better flavor, many will be harvested this way - I got one too small by mistake and the largest one was smaller than a tennis ball. 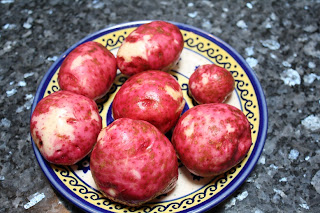 Bev’s normal process was to boil the potatoes until tender then fry in butter to crisp the skin, but we’ve been seeing the smashed process on TV lately and had to try it. So after boiling, she smashed them down with her hand into a flatter shape, then fried them in the butter. 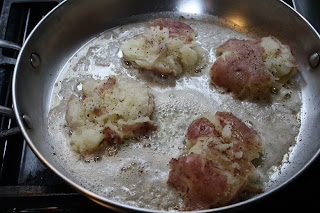 After turning and noticing the extra butter in the skillet, she decided to toss in some thick slices of Vidalia onion – just bought our first ones. 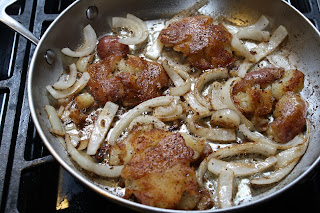 After plating she added some chopped green onion. 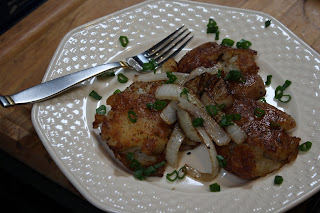 I love the smashed version as it provides much more surface area to be crisped by the butter without continuous turning and the onions were a nice addition. This was my lunch for the day and it was outstanding - makes the gardening labor well worth it.

Bev baked bread this day and made a pan of pecan cinnamon rolls. 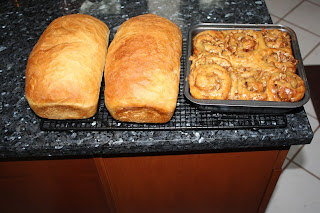 She normally makes a glaze for them, but this time used maple butter - it's not maple flavored butter.  We'd never heard of it before our stop at Bisson's Sugar House during our New England trip.  What it is is pure maple syrup that has more of the water cooked out of it to make it thicker - they also have taffy which has more water cooked out to make it even thicker and we bought his last one.  I wondered what we'd use it for when Bev bought it, but a new standard has been set for these babies - they were awesome. 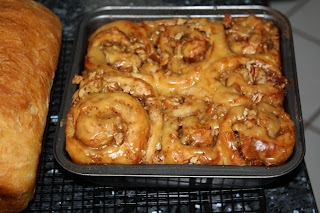 Wende came by for a visit and we served her this for dinner - kind of leftovers of potatoes, oysters, and smoked chicken breast - plus grilled romaine and a sweet roll. 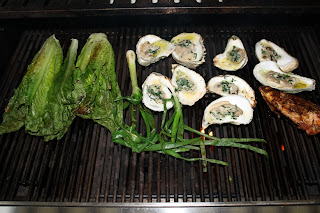 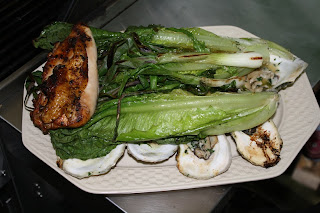 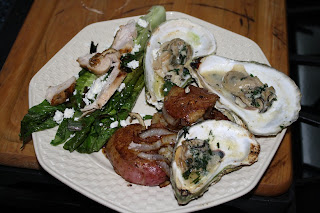 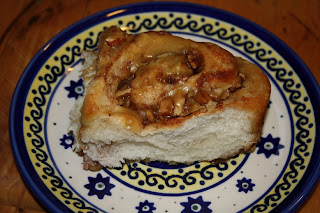 Pretty darn good meal for a throw together.

One year ago:  Tortellini and Italian Sausage