It’s hard to believe it’s been 10 years since we made a big batch of kraut and since then we’ve been buying it from the Mennonite market.  While theirs is very good, it has still been processed (cooked a little) which takes away from the flavor somewhat and while you can buy theirs raw, you have to order it in advance which we haven’t done.  When I mentioned to Bev that we should order some she insisted we make our own so we bought some of their cabbage instead and after trimming, we had 10 pounds. 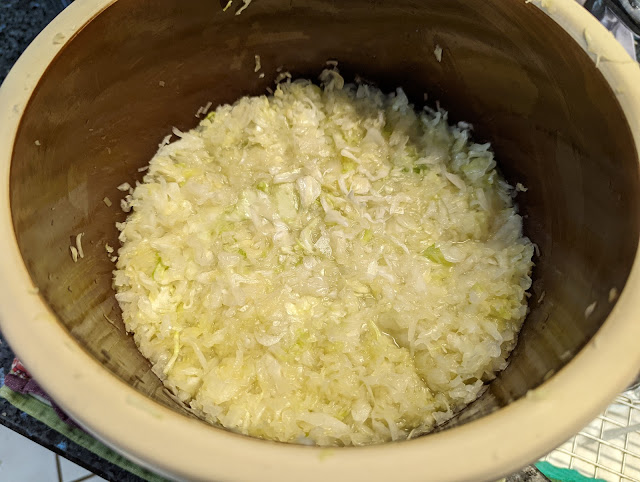 Real deal fermented kraut has only two ingredients – shredded cabbage and canning or kosher salt – and it becomes sauerkraut by fermenting in its own juices for 6-8 weeks.  The cabbage is mixed with salt then pounded to get it to release the needed juice.

We have a 5 gal. crock but didn’t want to make that much so we bought a 2 gal. one from Amazon. The last time our German friend and professional kraut maker, Mark, brought his tools for us to use which included a large slicer and a stand-up pounder. 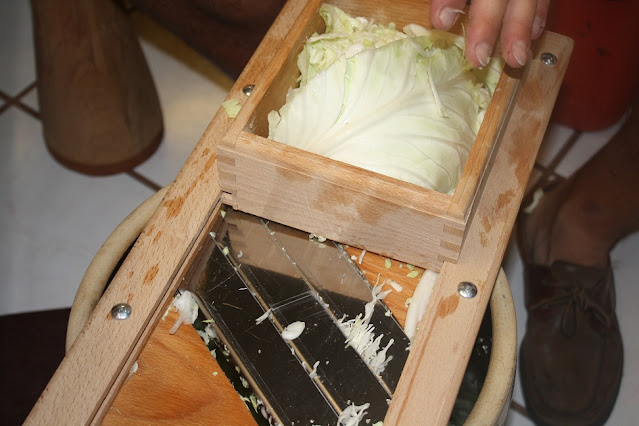 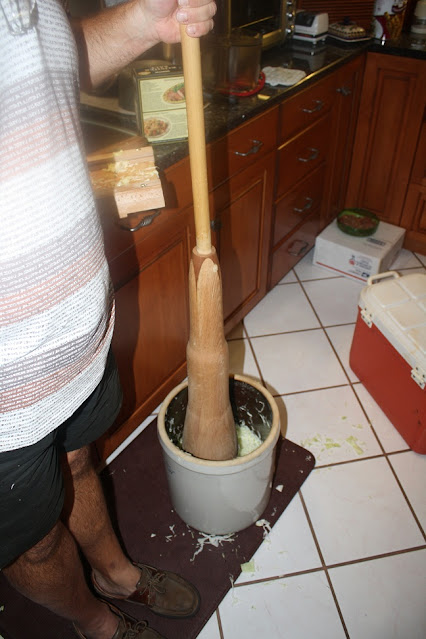 For this small job, I used our mandoline which required cutting the cabbage heads into smaller pieces but it worked okay for this small batch and I used the top of my rubber meat mallet to pound, which also worked okay.  This is my set up and I mixed 1 tbsp. salt with each 1½ pound of cabbage per the recipe from The Spruce Eats. 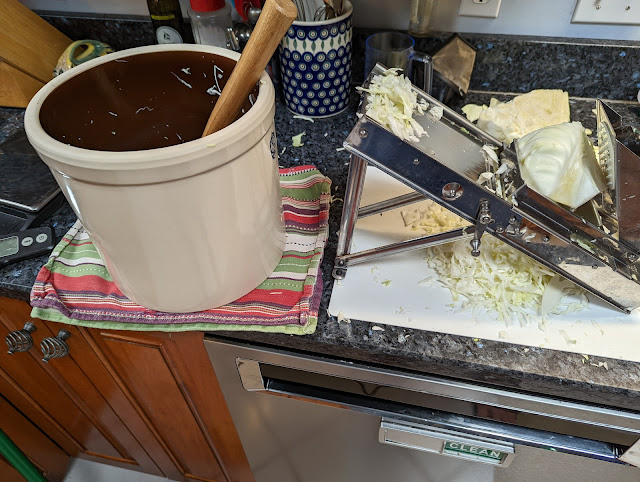 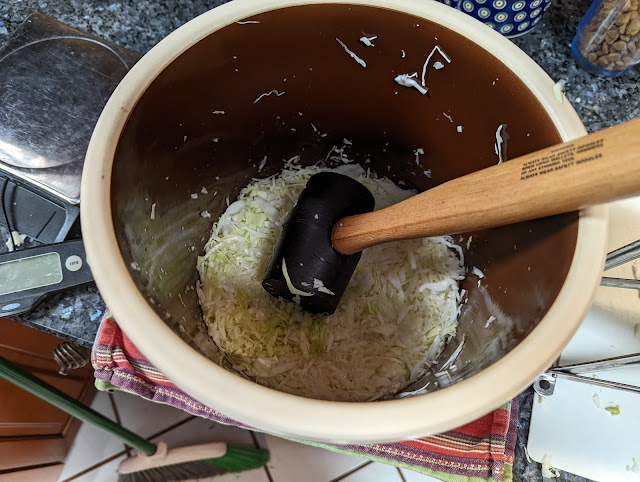 One caution if you decide to make your own kraut is that you will trash what ever area you work in and I’m thinking a driveway that can just be hosed down might be the best location for this job.

This is mine ready to be covered and you can just see the liquid at the cabbage top. 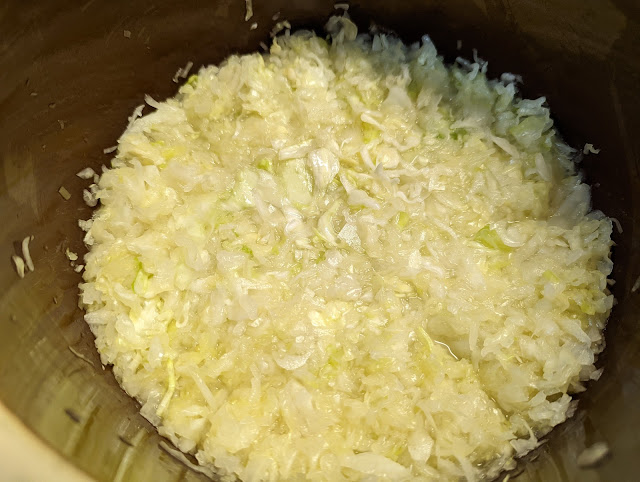 Mom and Grandma just covered theirs with a towel by I liked Mark’s method of using a plastic bag with water to seal it.  The gas from fermentation can escape and hopefully the scum that normally forms on top will be lessened. 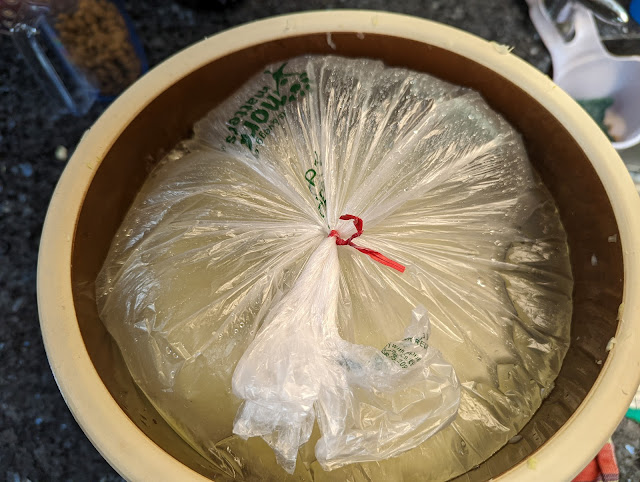 The crock is now in a room temperature dark place to do its thing.

From start to finish, including clean up and resting between poundings, I think it took me about 2½ hours and now I hope we have some great kraut in a couple of months.

I’ll be back with a report when it's done.

Bev decided to turn some of the smoked chicken from my recent BBQ day into chicken salad and if you like chicken salad using smoked chicken kicks it up a couple of notches - it was delicious.  I decided to use some for breakfast by topping it with sliced pepper jack cheese, nuking it for a minute, then adding a sunny side up egg - it was pretty awesome. 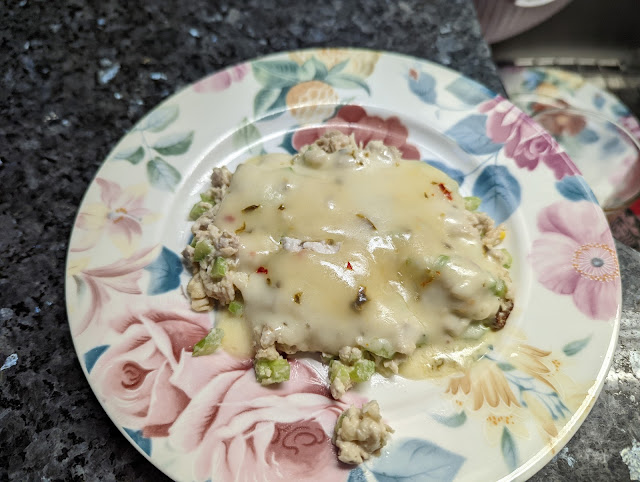 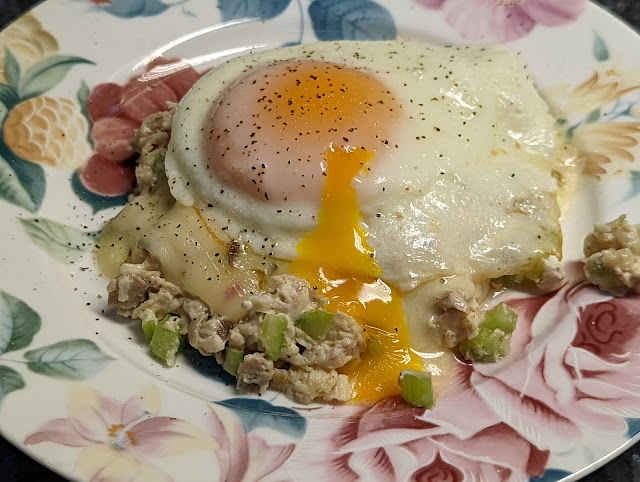