During our wine tasting trolley tour, we asked the driver where the locals go for non-tourist food and one of the places he suggested was the Coyote Roadhouse located a few miles east of Egg Harbor.  They opened at 11am so we skipped breakfast and went for an early lunch. 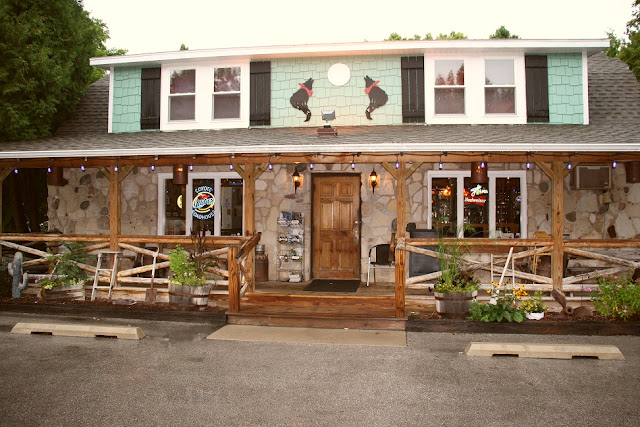 After entering, my first thought was yep, this is a roadhouse and the kind of place I like. 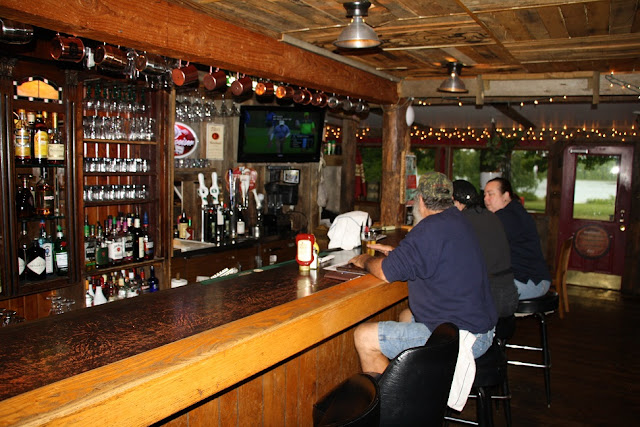 It is right on Kangaroo Lake and while it was rainy outside, we still had a nice view from our table. 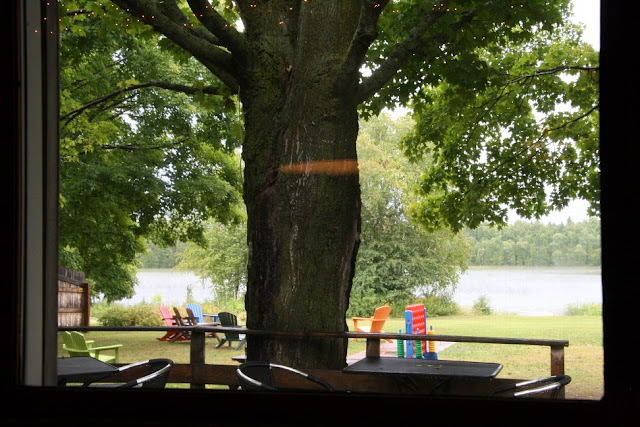 We began with a small loaf of French Fried Onion Rings which was plenty for the three of us, but I forgot to get a pic so here's one from the web. 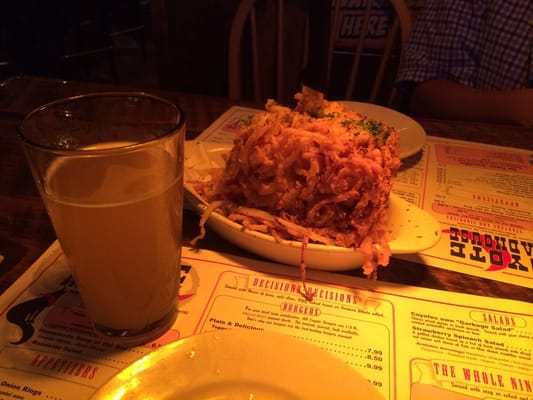 Bev and Pat both ordered a burger sided with German potato salad and I had a Reuben with the same side. 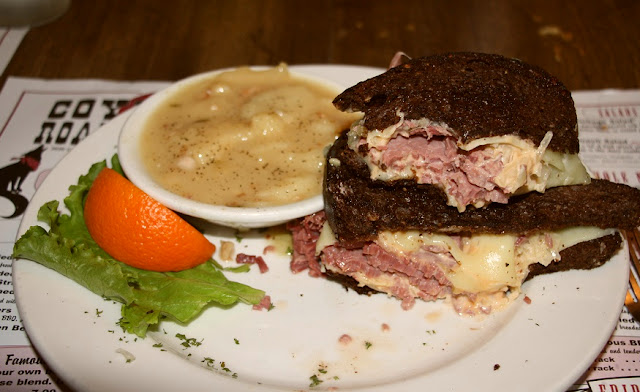 We all thought our sandwiches and the onion rings were good but the side was more like potato salad soup and while the flavor was okay, it didn't resemble any German potato salad I'd had (including in Germany) and I would not order it again.
Sandhill Cranes are pretty numerous here and on the drive back we caught this group feeding in the stubble of a grain field. 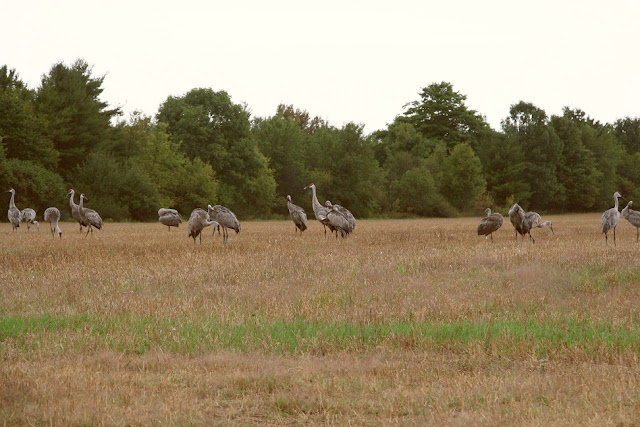 After lunch, the girls decided to return to Egg Harbor to be sure they hadn’t missed any shops and I puttered and got ready to make salmon on the grill for supper.  Our camping neighbor at Two Rivers liked to cook and said his favorite way to cook salmon was with a liberal dusting of Dizzy Pig Raging River (for salmon & chicken) cooked on an Alder Wood plank over charcoal with some alder chips.  I went to my trusty Amazon and ordered the spice and wood to be shipped to the Egg Harbor campground.

The fish was some lake salmon that we had purchased from the fish market in St Ignace and frozen.  I soaked the wood for a couple of hours, thawed & dried the salmon before seasoning and filled the charcoal chimney 2/3 full of Kingsford blue bag briquettes and I was ready for the girls to give me a cooking time.

I forgot to take a pic but here are our thoughts:

- Even though it is hatchery bred Coho and King salmon, the fresh water lake version does not have as strong of a salmon flavor as the saltwater version and the texture is not as flakey – I must prefer the wild caught saltwater fish.

- The Dizzy Pig worked well on it but provided a sweetness that Bev liked and I could have done without.

- The alder added a very subtle smoke flavor to the salmon.

I look forward to trying the Dizzy Pig on saltwater salmon and chicken to get a second opinion for myself.

Some much needed rain arrived again on Tueday but we had a couple of stops we wanted to make so we headed south of town.  Our first stop was our third visit to the Door Peninsula Winery to load up on Pat & Bev’s favorite two wines (Sinister & Sunset Splash) to take home.

At the recommendation of our trolley driver, Henk, we stopped at Shartner’s Farm Market for the best cherry pie in Door County. 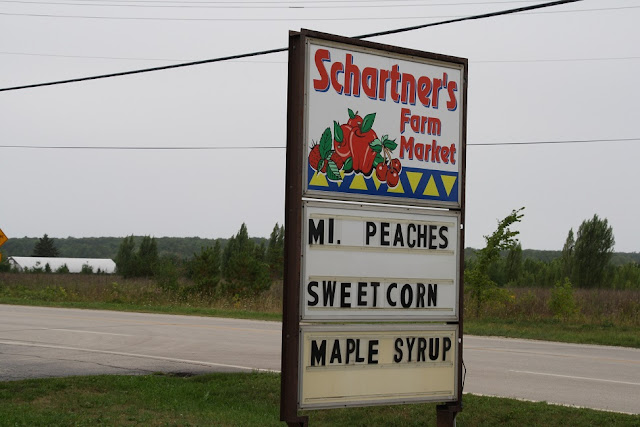 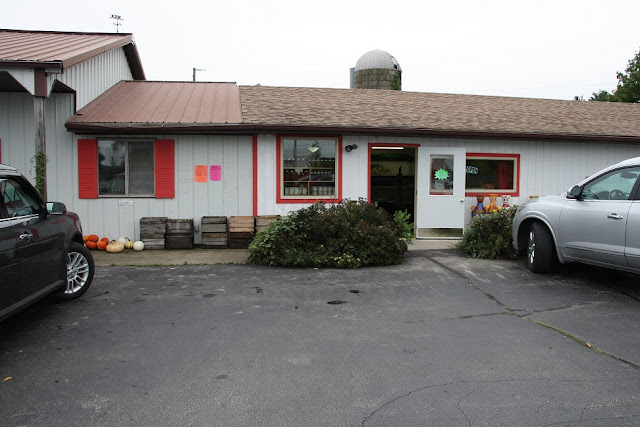 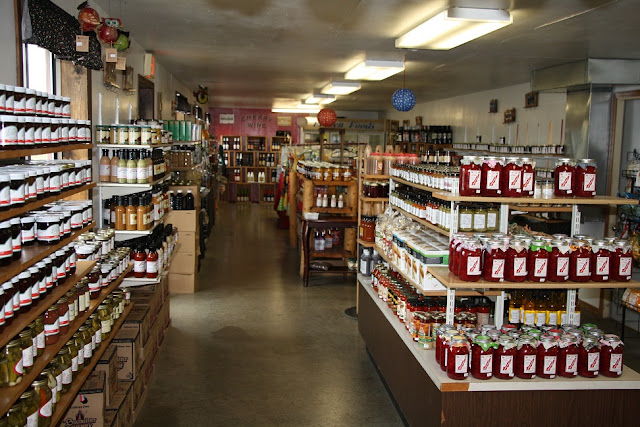 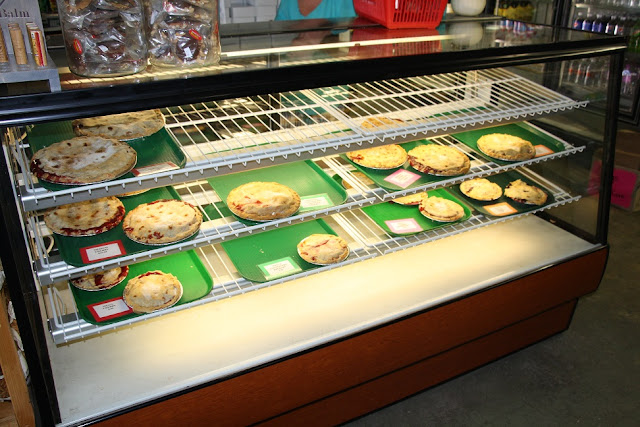 We ended up buying a small version of the Strawberry Rhubarb, the Cherry, and the Three Berry pies to try so we’d know which big ones to buy for our trip.  We liked the Three berry best, the Cherry second and the S-R had a good flavor but needed more sweetness - we decided we might find even better pies at our stop in Ohio Amish country so we held off buying more.

After our disappointing pasta bolognese at Galileo’s Italian Food, we opted to make pasta with meat sauce for supper vs. grilling burgers in the rain.  We bought some ground beef, onion, and green pepper at the market and two jars of pasta sauce form Shartner’s.  The sauces were very different but mixed well and I think they were each better than what we typically have tried from our stores at home.  Bev thinks she has seen the Roa's and it taste a lot like the sauce I make. 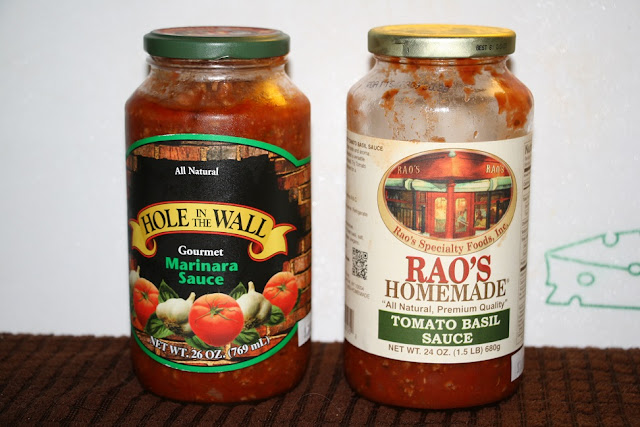 I didn't get a shot, but the pasta turned out very well and we have enough sauce for at least another meal.