I’ve posted about Low Country Boil (Frogmore Stew) before but it has always been cooked outside in a giant pot and dumped on a paper covered table for eating but this time, at 20F outside, it was all done inside.  Mostly I’m posting this to document this recipe for one of our favorite meals.  We were originally planning for 10 diners but ended up with six, so the food I had was too much and the numbers in ( ) are what I would cook for eight.

Directions:
Bring water and seasoning to boil in a large stockpot.  Add potatoes and cook for 5 minutes. Add sausage and cook for 10 minutes more. Add corn and cook for another 5 minutes. Turn off heat, stir in the shrimp, and cover pot until shrimp are pink, 3-4 minutes. Drain immediately and serve.

Rather than dump on paper and eat without plates, we poured it onto a serving tray that we could slide up and down the table for serving then ate from paper plates so very little clean up needed for this one pot meal. 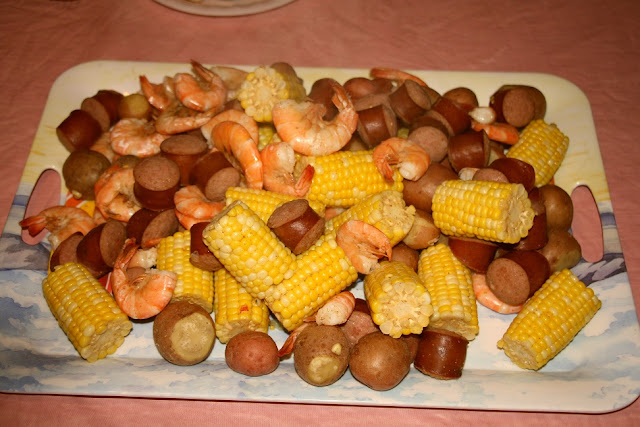 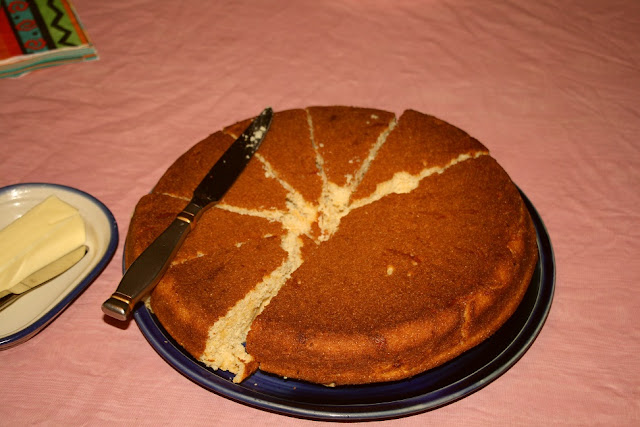 While wintertime corn isn't so great, it was still a very good meal and a big hit - it was entertaining watching Wende try to deal with peel-and-eat shrimp with two month old Eliza on her chest, before she got some peeling help.  Since the shrimp were swimming the night before we bought them on Florida's St George Island and froze them in water, they were very fresh. preservative free, and delicious.

I have a tendency to think of this as a meal for a crowd, but no reason it can’t be enjoyed as a meal for two.  Here is a link to Classic Frogmore Stew, which can be used for scaling to suit the number of diners then adjusted to suit your tastes (more or less sausage for example).

I know this will be a shock, but we used the leftovers for breakfast - chopped the potatoes and sausages, added some onion and pepper, sauteed, and topped with over easy eggs - my usual.