And now for the rest of our meal with Laurie and Dave.

We had watched Mario Carbone (Chef and co-owner of Carbone in NYC) make Italian Wedding Soup on the Today Show the other day and since it was on my make-someday-list, we decided to give it a try, especially since Bev was making some meatballs that day – while the recipe calls for chicken, she just made a smaller version of her beef meatballs.

Even though there are simpler versions of this soup, we decided to make this one with two changes – the meatballs and spinach in lieu of escarole (which many recipes do). Since we were serving it to company and wanted to make meal day easier and less messy, we cooked the meatballs and made the broth the day before and sauted the soup veggies the morning of.  Click on the title below for the full recipe and this shot is from their site. 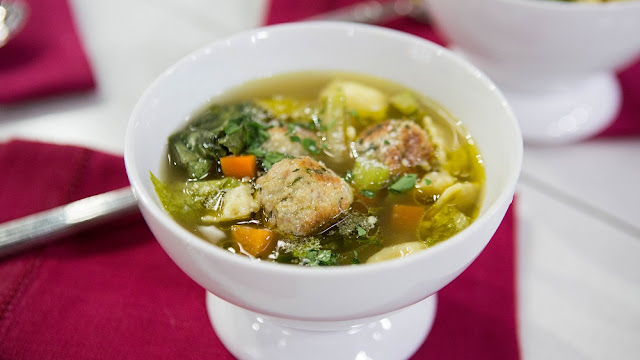 For the soup:
1. In a soup pot, heat a few teaspoons of olive oil over medium-high heat. Then add the celery, onion and carrot and gently sauté for 6-8 minutes.
2. Add the escarole, season with salt and cook until it wilts. At this point, add the brodo and bring to a simmer.
3. Add the chicken polpette and pasta and cook for 5 minutes.
4. Serve the soup in bowls, drizzled with olive oil and sprinkled with the fresh parsley. 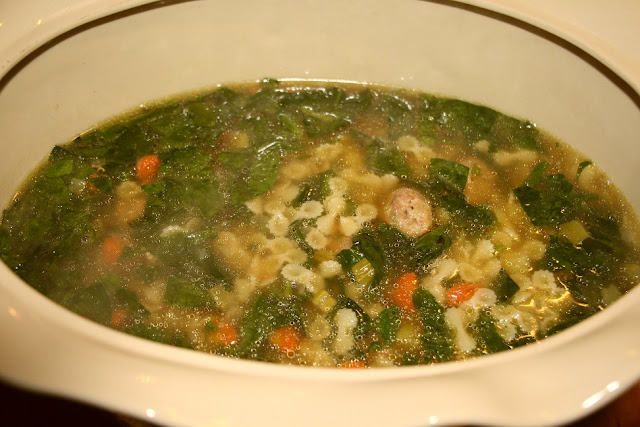 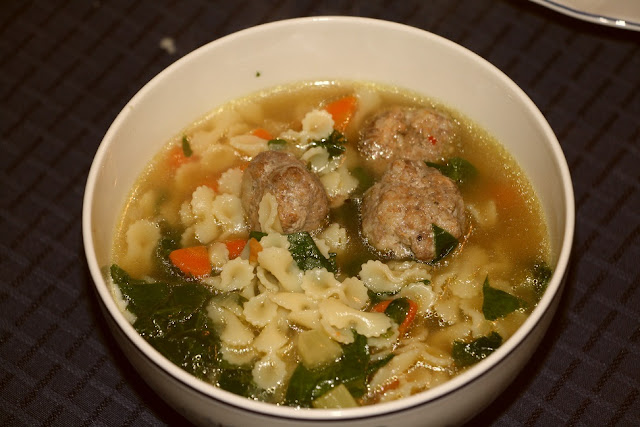 Notes:
1. I see this soup as similar to wonton soup – chicken broth with a little stuff in it, but since I like heartier soup, I used more pasta than called for – I cooked a pound then added it until I liked what I saw (12-14 oz.).
2. Since the key to this soup is the broth, I would use 8 thighs again and then simmer it for an hour to get a good, rich broth.
3. Since I made the broth a day ahead (will do the same thing again), I skimmed the fat from the top then heated the it to a simmer and adjusted the seasonings before adding anything else.
4. I added the veggies and meatballs and cooked about 15 minutes until the meatballs were warmed through, than added the pasta and cooked another 5 minutes.
5. We brought it to the table in a tureen, ladled it into bowls and topped with a little grated parmesan (I didn't have a rind for the Brodo).

We served it with salad and a loaf of hot, parmesan & herb topped focaccia bread and we all thought the soup was delicious and a definite make-again recipe - Bev was still raving about it the next morning.  Next time - and there will be a next time, I will make it just the same - broth the day before with extra chicken thighs, meatballs the day before, trying chicken this time, and with escarole if I can find it.  I will also use this broth recipe for all soups based on a rich chicken broth, such as chicken noodle or egg drop.

For dessert, we had tart furnished by the Myers and it was also very good.

After this Italian meal, we surely had to break out the homemade Limincello for the digestif.  I believe a grand time was had by all.