I decided it was time to take a traveling break and do a food post.  We’re having a little brunch get together on Sunday and one of the requested items is a stuffed fatty. On Wednesday of this week, I smoked the fatty, along with a slab of ribs and a piece of pork loin. I plan to use the loin as an experiment by stuffing and making into Pork Wellington. It just got a light coat of my pork rub and was cooked to 142* internal temp in a 235* pit. I also cooked the ribs for the Sunday brunch and they also got a coat of my pork rub.

I won’t go into a step-by-step on making a fatty as I’m confident all of the BBQers who read my blog know how - although they could be cooked on a grill or in an oven. I considered a bacon weave on the outside like Jeanie usually does over at Cowgirl's Country Life, but I was already planning plenty of meat for the meal.

I first diced and fried 3 strips of bacon then removed and drained them on paper towels. I didn’t have any frozen hash browns so I made some fresh ones from potatoes that were sprouting and needed to be used. I cooked the potatoes and some chopped onion in the bacon grease then added a small can of chopped green chiles and 4 beaten eggs. 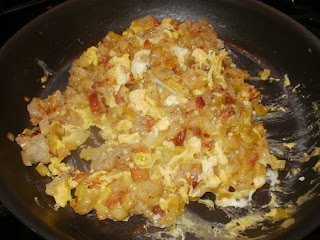 When the eggs were set, I removed the mixture to a plate to cool prior to stuffing the sausage. Just before stuffing, I stirred in some shredded cheddar cheese.

In Jeanie's post, linked above, she also shows the plastic pipe and piston she uses to shape her stuffing mixture into a dense log - she's really talented. I don’t have one of them, but I do have a jerky gun that performs the same function - although a little bigger around would be better. 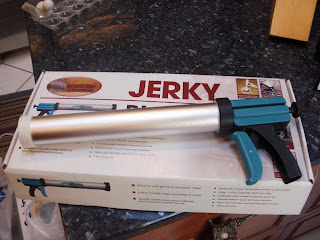 Here it is ready to roll up and after rolling up in the cut open gallon plastic bag that I used to shape it - I used some homemade breakfast sausage. 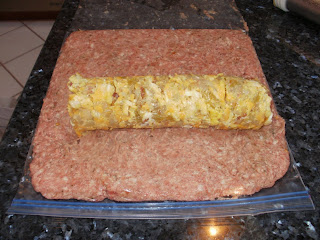 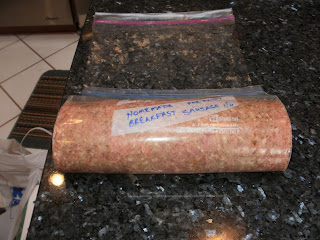 After rolling, I put it back in the fridge for about 30 minutes to firm up, then, gave it a light coat of pork rub and into the smoker for cooking to 145*. Here’s the finished fatty and pork loin. 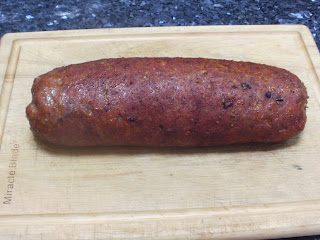 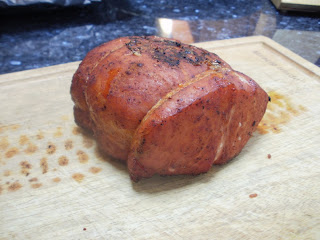 This is the finished rib rack. 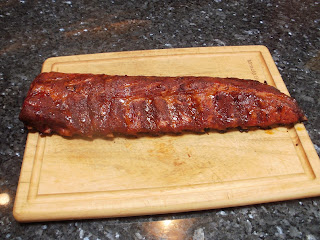 It was a nice 65* day here in East Tennessee - pretty nice BBQ weather for February - I wore shorts.