I still had a couple of pieces of smoked salmon in the freezer left from BBQ day and I decided to see how they would work as salmon patties. I looked at several recipes and they all called for either canned or barely cooked fish, but mine was already fully cooked. I’d saved a recipe for tuna cakes which used mashed potatoes rather than bread crumbs as the filler and I thought the moisture in the potatoes would work better with this salmon, plus it was different and I’ve never had it. So I used the salmon to tuna ratio from this recipe, but the spices typical of salmon cakes.

I found a recipe for salmon cakes by Ina Garten, who’s cooking really appeals to me, and since it had several of the same ingredients as in my salmon spread, I decided to go with it. 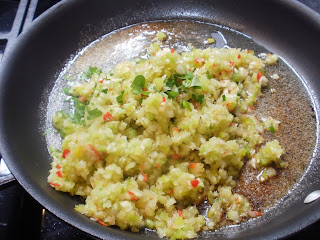 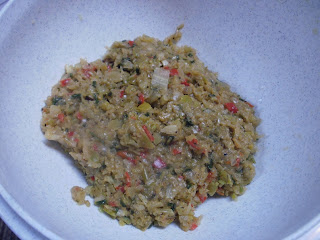 Add the mashed potatoes, mayonnaise, mustard, and eggs to a large bowl and mix well. 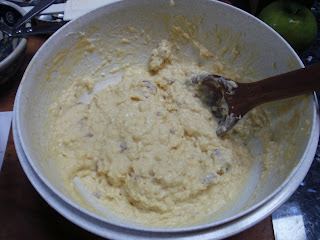 Add the vegetable mixture and corn flour and mix well. 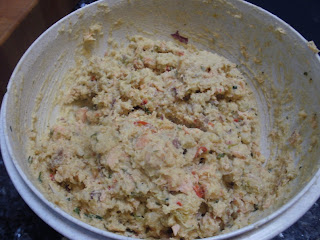 After tasting, I decided I had some very good potato pancakes without the salmon.

Add the chilled salmon to the bowl and mix to get the desired size of salmon pieces. 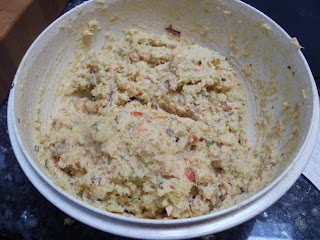 Heat the remaining 2 tablespoons butter and 2 tablespoons olive oil in a large sauté pan over medium heat. In batches, add the salmon cakes and fry for 3 to 4 minutes on each side, until browned. Drain on paper towels; keep them warm in a preheated 250 degree F oven and serve hot.

While I like to use a knife and cutting board, when a recipe calls for quite a bit of finely diced items, Bev has convinced me to use the food processor, and it worked perfectly for this.

I didn't time the veggie saute but cooked them until most of the liquid was gone.  When I was prepping them, Bev asked how much salmon I had, but they cooked down to not very much, but packed with flavor.

Before I cooked the cakes, I experimented with the technique for getting the pan to the perfect temp as shown on the video from Rouxbe Online Cooking that Chris from Nibble Me This posted recently. What a neat liitle proceess - it did just as the video showed and after talking with Chris, I signed up for the school.

I heated the pan per the instructions then added my olive oil and butter (melted), then I added the cakes and lowered the flame just a little. Here they are after flipping.  As you can see I had a problem with 3 of them - next time I'll use 1/2 cup of flour and make them a little thicker.  Also, I needed to lower the heat a little more, but they did slide around in the skillet as the video said they should. 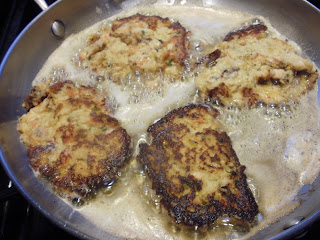 We sided it with some spaghetti squash casserole that Bev invented the night before from some things on hand that included some mini Italian sausage meatballs, diced tomatoes, Rotel, tomato paste, onions, peppers celery, spices, pepper jack and parmesan cheese. 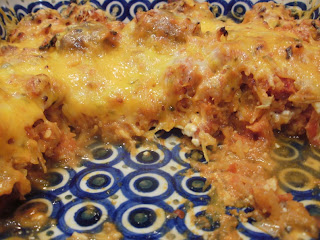 Here's my plate. I'm not a big fan of spaghetti squash, but I thought this was very good.  I considered a sauce for the salmon cakes, but they had so much flavor, I ate them naked - they were very good even though a little too brown. 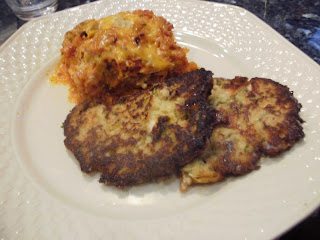 Most fish cake recipes call for as little filler as possible, so these might be more accutately called Smoked Salmon Potato Cakes.  I like the fact that I have enough left for another complete meal plus some extra fried ones from this meal - I think I feel some breakfast dishes coming on.