Stuffed Pork Loin For The Family

HAPPY NEW YEAR'S EVE TO EVERYONE
Uncle Bill, the last sibling of Bev’s mom, passed away this week and the tradition here is to take food to the family. Knowing I had two whole pork loins in the fridge, Bev decided she’d like me to make a stuffed one for them.

I trimmed off most of the fat, opened it up, and pounded it to an even thickness. For the stuffing, I sautéed some onion, roasted red pepper, garlic and just a little sun-dried tomato, then let it cool, spread, and added some Tillamock smoked cheddar. I swear I’m going to have to write down the stuffing ingredients as soon as we decided on them as I always forget something. This one was supposed to get a little diced country ham, which I remembered about the time I tied the last knot. Here it is before and after rolling - I like to put a good taper on the outside edge (left in the shot) so it is smoother on the outside after rolling. 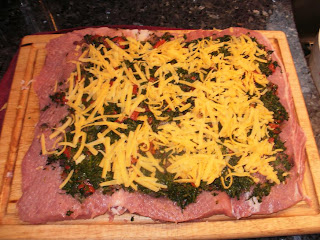 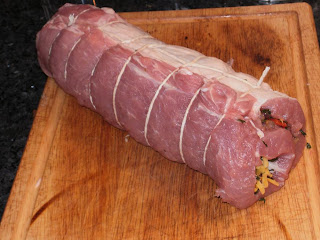 On the outside, it got a coating of olive oil and a sprinkling of dried thyme, sage, parsley, S&P. 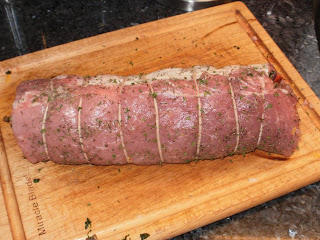 I baked it in a 350* oven to an internal temp of 140* so it would have room to be reheated without getting overdone. 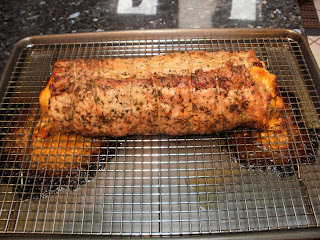 If we weren’t pressed for time, I would have used the reverse sear method to develop a more consistent doneness throughout (similar to the Christmas rib roast), then put a high temp crust on it at the end.  Stuffed loin is a fairly quick and easy way to provide a pretty special meal, and guess what happened to that highly flavored cheese you see in the bottom of the pan - yum.