Bev’s preferred meal on Christmas Eve is potato soup and we had another dish we wanted to make as well, so it was soup for lunch and fish tacos for supper. Sometime in the past, son Rhett had mentioned they had the worlds best fish tacos at Fulton’s Crab House at Disney World and we wanted to see how some homemade ones would compare. We started with Bev making the sauces the day before – we had two that sounded good and decided to make them both for comparison.

The initial part of the meal was the tortilla’s which Bev made from this recipe. After she and the grandkids made them, we cooked them on the cook top griddle.

We used some of our always-on-hand crappie for the fish and deep-fried it using a batter recipe for Baja Style Fish Tacos that came from food.com

The sauces were the one that accompanied the food.com batter and one from Vickie over at Montana, Part Three and they are very different.

Here's a plate of tacos ready to fold and eat. 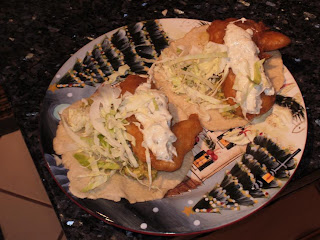 I had one as a taco, but decided it would be as easy to eat and more picturesque in tostada style (didn't deep fry the tortilla).  From the ground up it was the tortilla, guacamole, fish, sauce, cabbage, pico de gallo - everything fresh made and Bev makes delicious guac and pico. 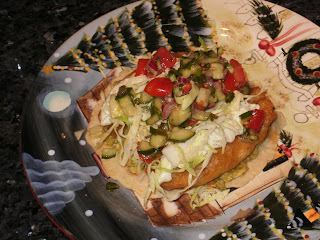 I rarely get enough flavors in my fish batter, but this was just right – enough to taste but not overpower the fish and while both sauces were very good, we all preferred Vickie’s. I‘ve only eaten fish tacos one other time and I thought they were ok, but more like a waste of good fish. I thought these were absolutely delicious and find it hard to imagine any that could have been a whole lot better. Rhett said that one of the things that made Fulton’s so good were the flavors imparted by grilling the fish vs. deep frying. We were planning a simple Christmas morning breakfast, but the unanimous decision was to use the remaining fish for another round of tacos and they were delicious again and  - a major hit with Rhett and Beth.