We don’t do the holiday sweet making that many folks do, mostly because we’re not big sweets eaters, but also because we don’t need the calories and there’s usually no one here to eat them. This year, since 5 of the grandchildren will be around, Bev decided to make a candy she really likes. The recipe came to us from Bev's sister-in-law, who said it's been a big hit for the 30 years she's been making it.  It’s very easy and something I’m sure the little ones will enjoy eating. We bought the ingredients from Sugarbakers, in Knoxville, which is a candy making and cake baking supply store.


Directions
· Melt the white chocolate in the microwave – only 30 seconds at a time – stir in between – don’t get it too hot. (Bev made a double boiler by setting a bowl over a pan of boiling water and preferred this method, as it’s less risky).
· Stir in the mint candy  – you can also smash up peppermint candy canes.
· Spread out very thin on wax paper, it will set up on its own at room temperature.
· After it cools, break in to chunks, just like peanut brittle.

Bev added 8 drops of peppermint oil to the second batch to make it a little more minty and she preferred it.

Here it is cooling on the counter 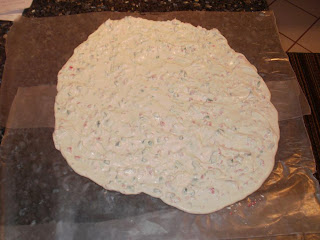 And in the bag ready to dive into. 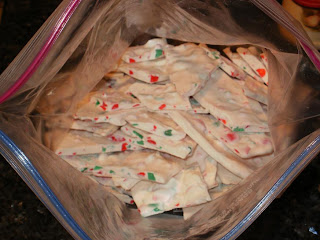 I’m not a fan of white chocolate, but even I thought it was pretty good. Making it is also an activity that adults and kids could easily do together.

Bev also made a few nutty candies by drizzling some of the chocolate over piles of chopped pecans before she added the peppermint candy to the chocolate. 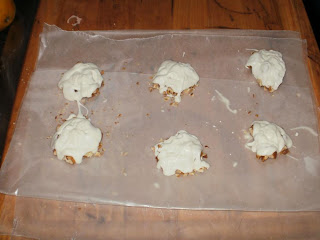