I found a nice piece of top round london broil in the freezer the other day and we decided to use part of it for fajitas. It was a little more than an inch thick, so I split it in half so the marinade could penetrate more of it. We decided half would be plenty and put it in the marinade at 8am, with the other half going in to the fridge for something else. By dinner time, neither of us felt like cooking fajitas so it was left in the marinade until the next nights dinner – so it was marinated for 32 hours.

The marinade we used came from Allrecipes and is as follows, with a slight Bev modification:

Mix everything together and pour over meat in a plastic bag.

*We like the flavor and added cumin believing most Tex-Mex dishes are incomplete without it.

For the meal, Bev whipped up some and guacamole and I cut up some onions to sauté with our julienned frozen peppers.

I used the gas grill for the meat and side burner for the veggies – we’d spent the day, starting at 5:30am, shepherding a friend who had nasal surgery, Bev then came home and made some potato soup and cornbread and took it the 10 miles to her. It was after 7pm, cold and dark when I started cooking, and I didn’t want to fool with the charcoal grill, although I know it would have been better. It was a busy day.

Here's the veggies sauteeing - my grill could stand a good cleaning. 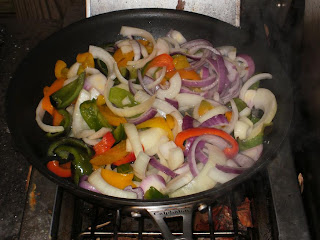 I added nothing else to the meat, beyond the marinade, grilled it to an internal temp of 130*, rested and sliced thinly. After flipping the meat. I gave the tortillas a quick warm up on the grill. 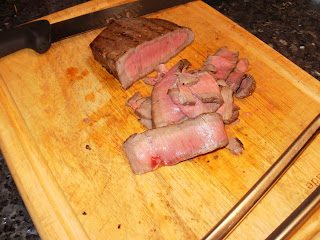 We all sampled the meat and thought the marinade was a definite keeper and the texture was still normal following the long soak.  Here's the building of mine and since we only had large tortillas, it ended up as a burrito. 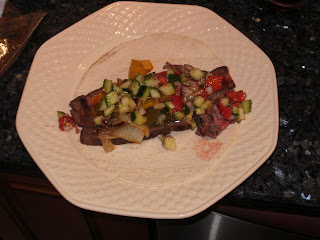 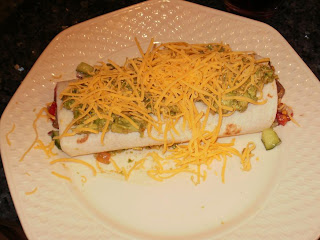 It's hard to beat a good Tex-Mex meal with delicious meat and fresh accompaniments.  The london broil worked perfect for the dish and I still have another piece the same size for something else - like country steak and gravy, perhaps.

Have a great day and thanks for visiting Almost Heaven South.