MERRY CHRISTMAS TO ALL

I’ve had a dish on my really-want-to-try-list for sometime and this seemed like the perfect occasion for it. The two nearest children, Wende and Eric, and family came down on Tuesday for a holiday get-together since they were all leaving town for Christmas. The meal was to be Tyler Florence’s Ultimate Beef Wellington, sided with baked potato and Caesar salad.

As it happened, we had two pieces of filet in the freezer looking for a meal, which meant I made two rather than one, each weighing about two pounds. I have a lot of faith in Tyler, so I followed his recipe as closely as possible. The recipe is very long and rather than take up so much blog space, please click on Ultimate Beef Wellington for it.

Bev got a great deal on the filet butt end, but the first challenge was to trim out all of the junk from the three muscles that are there. Here it is with the fat chunks and silverskin removed – and I ended up with a little piece that will surely make it on to my breakfast plate. I made sure not to completely sever the multiple pieces – except the extra one. 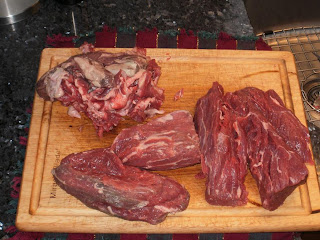 The trick was taking multiple pieces of meat and having them behave as one, but I thought it would work for this dish, so I tied them up tightly prior to searing. 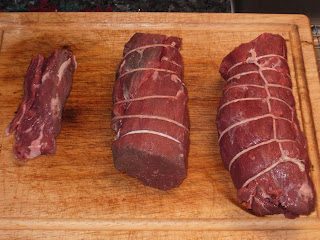 I had cooked the mushroom mixture (duxelles), earlier so it could cool and while the meat was searing, I laid out the prosciutto on a sheet of plastic, spread on a layer of the duxelles, and seasoned it. 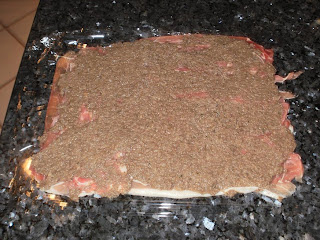 Here it is after chilling for 30 minutes, ready for rolling in the pastry. 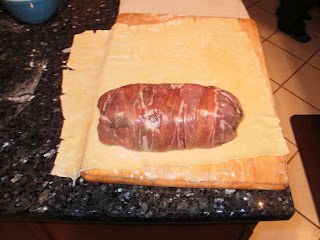 And here are the two of them sealed, egg washed, and ready to bake.  At this point, I made a critical error in failing to make slits in the dough so the moisture could vent out - more to come on this. 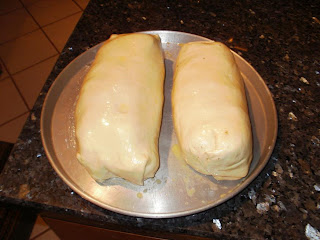 The finished product and as can be seen, they made there own vents.  They weren't as dark as they look here. 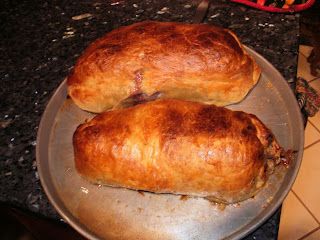 We served it with salad, baked potato, and garlic cheddar biscuits and son Eric made up a couple of delicious sauces.  We didn't have any green peppercorns for Tylers sauce, so Eric used the same recipe and substituted capers - which we all like.  The second was a sundried tomato cream sauce which he just invented - I need to learn how to do that.  I went with the caper sauce as the other one was a little sweet for me - it was Bevs favorite. 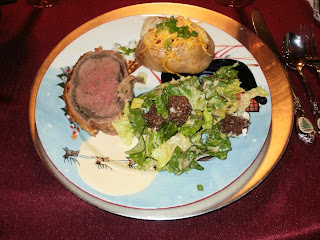 I thought the dish was very good and will try it again, but my error was costly as the bottom was soggy - but it tasted great with the meat an duxelles juices in it.  The recipe wasn't clear on how dry to get the duxelles, so mine may have been a too moist, contributing to the problem.  Next time, I'll make sure on the top vents and maybe cook on a rack, perhaps with a small vent (drain) or two in the bottom.  Suggestions appreciated.

Using the multiple pieces of meat worked fine and I couldn't tell mine wasn't a single muscle, but I forgot to look at the others.

Bev and I hope you have a super good Christmas Day and we wish you the happiest of New Years.