I haven’t had butterbeans since I was a teenager – I guess technically I’ve never had butterbeans as what Mom served she just called dried limas. But since this recipe starts with large dried lima beans. I’m going to take a leap and say they are the same thing. I was reading my favorite blogs the other day and came across a recipe for butterbeans from Mary over at Deep South Dishes on Dec 10. I pretty well followed her recipe except I used a center slice of ham from the market and a quart of rich chicken broth made with my chicken trimmings from Wednesdays BBQ day. I only took a pic of my finished bowl as everything else was pretty basic. 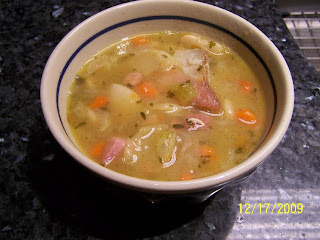 I thought the flavor was delicious, but next time I’ll use two pounds of beans for the recipe amount of liquid, then add a little more if needed. It turned out more like soup than the bowl of beans I was wanting. I will definitely make it again.