Thanks to Mary at deep Dish South, I learned my links have been logging you off.  I don't know what I was doing wrong, but techie support daughter, Wende, told me how to fix it and hopefully it will happen no more.

I grew up about 75 miles from Pittsburgh so I have a draw to the Steelers – I was a big fan of Vince Lombardi (who? you young folks ask) so I have a draw to the Packers. But the truth is I'm not a big pro football fan and generally only watch the big, end of season games, but the Super Bowl does provide a great excuse to get together.  Rather than root for anyone, my plan was to enjoy the game, enjoy our 14 guests, have a good time, and try to stay up until the end of the game (I’m a hit-the-hay about 9pm guy).  I wore a gold WVU shirt that matched up close enough to bothe teams colors and I could be for whoever won.

It’s been great reading blogs the past two weeks with all of the terrific Super Bowl food suggestions, but we ended up being pretty traditional.  One of our goals was to prepare items that required little attention from us during the party.  During winter get-togethers, we always like to have a soup and while we started out providing three things for the menu, Bev kept coming up with additions, so we ended up with these provided by us: 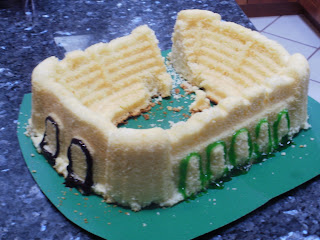 It obviously had a snow event before I took the shot.

Bev and I had everything ready to go and relaxed a little in mid-afternoon - here are some shots of party central. 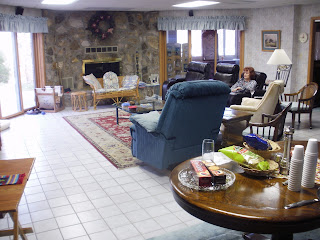 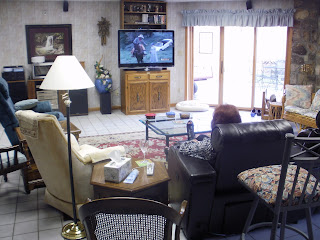 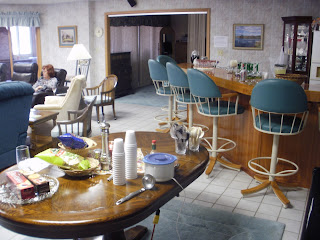 My preferred wing preparation method is smoked, then deep-fried to crisp the skin, then tossed in wing sauce.  But for this meal, I didn't want to have to fry them during the party, so I smoked them on Friday, then on Sunday, I let them come to room temperature and stuck them in a 500* oven for 7 minutes to warm up and get crispy.  I tossed half of them with Tennessee River BBQ Sauce and the other half with Hot Sriracha Garlic Sauce that came from Hot Sauce Daily via Chris over at Nibble Me This.  I sided them with celery sticks and bleu cheese dressing using the recipe from Dennis over at More Than A Mountful.

Unfortunately, by halftime when I served them, I forgot the pictures.  I only ate the hot ones and I liked both the wings and the bleu cheese, the rest of which will become salad dressing.

I think I've settled on the recipe for my Smoked Salmon Spread as follows:

I smoked my own salmon for this batch and while it was delicious to eat, it wasn't quite smoky enough for the spread.  Next time I'll cook it at a lower temp so it can spend more time in the cooker and take on a little more smoke.  I made double this for our party to ensure leftovers.

I took some shots of the individual foods, but they were nothing special (the pictures not the food).  I think I sampled all of the food and thought everything was delicious.  It's like going to a pot luck supper - everyone wants to bring their best.   Perhaps I shouldn't single out one item, but it's been a 50 year wait.  When I was young, my family always made Chex Mix at Christmas, with lots of butter and garlic.  I've eaten many versions since then and none of them measured up until Laurie Myers brought hers.  It tasted just like Grandma's and I ended up with the left overs to enjoy.

Serious football watching is happening and serious talking over to the right. 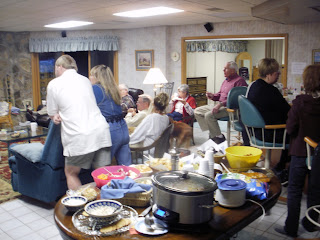 All-in-all it was a successful event and everyone seemed to enjoy themselves - Bev and I perhaps a little too much.  And how does one kick off Super Bowl Sunday. 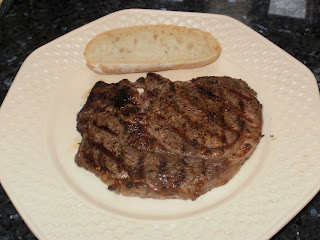 We still had one of these laying in the fridge from all of the rib roasts carving.