When I have leftover poultry bones and parts, I usually just cook them in water and make broth, but sometimes I add veggies and herbs to make stock. While conversing with Chez John, over at Fat Johnny’s Front Porch about his jambalaya recipe, he mentioned he started with rich stock, which he described as being made from roasted bones – it’s also called brown stock verses white stock for un-roasted bones. So I decided to give it a try.

In the freezer, I’d been saving chicken bones left over from meals and BBQing for several months and had enough to make a batch. I would like to have also used the Thanksgiving turkey carcass, but it had too much of the sweet glaze flavor remaining. I put the raw parts in a roasting pan and cooked at 450* for about an hour. After removing from the oven, I transferred the bones to a stockpot. I’m never sure about the proportions of poultry parts to water, but after some research, I settled on the following for each four pounds of raw poultry parts (1# raw bones per quart of water).

Some recipes I read called for roasting the veggies and herbage with the bones, but for my first try, I decided to just roast the poultry and since I had 5# of chicken, I used 5 quarts of water and kept everything else the same.

After adding everything to the pot, I covered and cooked over my lowest heat setting overnight (about 14 hours) then strained out the solids. After cooling to room temperature, I put it in the fridge over night and next morning I skimmed the fat from the top. I put some in quart bags, but since many recipes call for smaller amounts, I froze some in 1/2 cup molds, then stored the individual cubes in a plastic bag – it was definitely a darker color.

I also had 4# of smoked bones left over from pulling chicken and I made them into broth, not stock, just to see how it would turn out. I only cooked it for about 6 hours and when I tasted it, I got the flavor of pinto bean broth to which a smoked ham hock had been added. So I’ll keep it and try some in a pot of beans and other places where smoky meat is part of the recipe or used for flavoring – perhaps gumbo and other soups. I stored it in both bags and the molds.  These are frozen and headed for plastic bags. 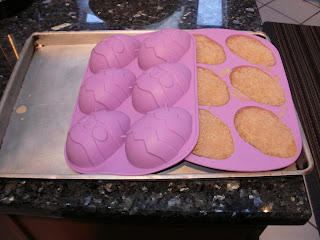 Lastly, since the softer bones, veggies, and meat were so well cooked, Bev tossed them into her grind-almost-anything Vita Mixer with some liquid and made a puree.  She then mixed this with other cooked ingredients ingredients (old veggies from the freezer, rice, stale bread, etc.) and made dog treats. She molds them into tennis ball sized meatballs, freezes them individually on a sheet pan and stores in re-sealable plastic bags.  Here's the pot full and after smelling and looking at it, it's almost tempting enough to try a spoon full. 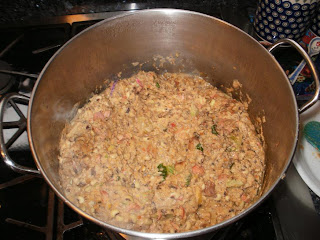 We got the original meat, then the broth, then dog food, and only the big hard bones and a little fat went into the trash – I’d say we got our moneys worth from those chickens.

While I was putting up the broth, we had "Down Home With The Neely's" on TV and Bev came in the kitchen and pronounced - "while I always like you to compliment me, if you talked to me like he does to her, I soon wouldn't believe anything you said to me."  If you watch the show, you know what she means.