I’ve seen several recent crock pot and braised beef recipes that interested me and I had three packages of shanks in the freezer that needed to be used. Bev and I discussed what dish to make and couldn’t decide, so I decided to get the meat going then decide later what to make it into – maybe even two dishes. The first thing I did was get the crock pot going on high with just a little water in it.

I started from an Emeril recipe utilizing 4 shanks and I had 6, but went with his proportions anyway. After S&P, I browned the meat in olive oil – I considered dusting with flour but wasn’t sure if I’d make a thickened dish. I removed them from the pan and added:

When they started to caramelize I added

I cooked this a couple of minutes until fragrant and deglazed the pan with 1 cup red wine. Then, I poured everything from the pan into the crock pot, laid the meat in – it took two layers, added the lid, and went off to repair my wheel barrow (don’t buy one with a plastic tray if you plan to use it hard, as the bolts holding it to the handles may pull through).

I let it cook on high for two hours, then flipped the ones not submerged in the broth and turned the heat to low. After three more hours, the meat had fallen off the bones, so I removed it and separated the meat from the fat and bones (puppy treats) and pulled the meat into smaller pieces. I removed the broth and veggies to a bowl and let them set so I could skim the fat, then returned half to the pot.  I whisked in a couple of tbsp of flour to get the thickness I wanted and returned half the meat to the pot – I had already turned it up to high.  Obviously, I saved half of the meat and broth for another dish.

Then, I added three carrots in 1” pieces, 4 oz. of quartered mushrooms, adjusted the S&P and cooked until the carrots were done. I wanted to serve it over egg noodles, but since Bev’s not a big fan, I used angel hair pasta – her favorite. I thought it was very good, Bev loved it, and it was the perfect meal to have ready when she came in from power shopping on such a cold, blustery day - I could have used a little more gravy stuff on mine. 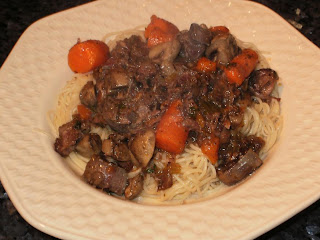 Tune in later for the rest of the story and thanks for stopping by.