When I saw the recipe for Bacon Wrapped Cranberry Walnut Pork on Chef John’s Food Wishes blog, I knew it had to be tried and since I had a two pack of pork tenderloins and some apples, I searched the web and found the recipe for Stuffed Pork Loin at Delish.com for the second one.

I changed the first one a little to match our ingredients and the changes are in () but the original recipes can be found by clicking on the above links. 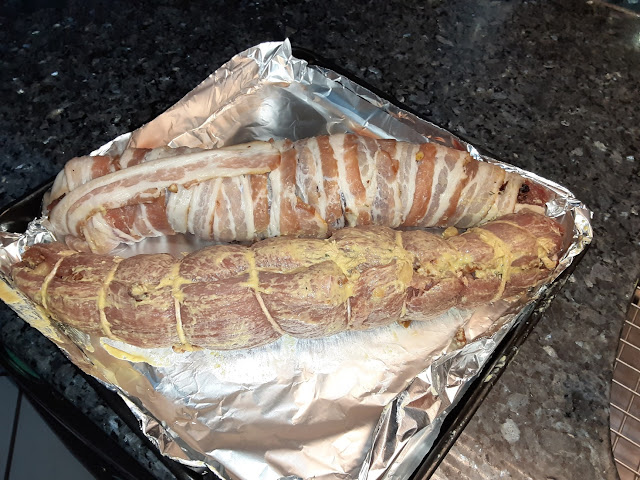 Notes:
Watch the how-to video at the website for more instructions.
* - Since I cooked the two tenderloins in the same pan, I cooked them at 375F until the Stuffed Tenderloin was done then raised the temp to 450F to finish the Bacon Wrapped one.

The recipe was written for a four pound loin roast but since I was using a one pound tenderloin, I adapted all ingredients.

Direction:
1. Preheat oven to 325F *.
2. In a large skillet, cook bacon. Drain all but 1/2 tablespoon fat. Add apples and shallots to skillet and cook until softened, 4 to 5 minutes. Add garlic and cook until fragrant, 2 minutes, then stir in rosemary and pecans. Season with salt and pepper.
3. Butterfly pork: Using a sharp knife, place roast fat side up, with short end toward you. 4. 5. Position knife 3/4” from bottom of roast; cut into 1” toward center of pork. Lift up top half of pork and continue making shallow horizontal cuts deeper into roast, unrolling top of pork as you cut and keeping knife parallel to cutting board to maintain the same thickness until pork unrolls to form a rectangle.
6. Season pork generously with salt and pepper. Top all over with filling. Roll up pork loin and tightly secure with kitchen twine.
7. Rub with mustard.
8. Place in a roasting pan on a rack with fresh rosemary sprigs and bake until internal temperature registers 155F (138 for Larry), basting with the pan juices.
9. Let roast rest 10 minutes before slicing. 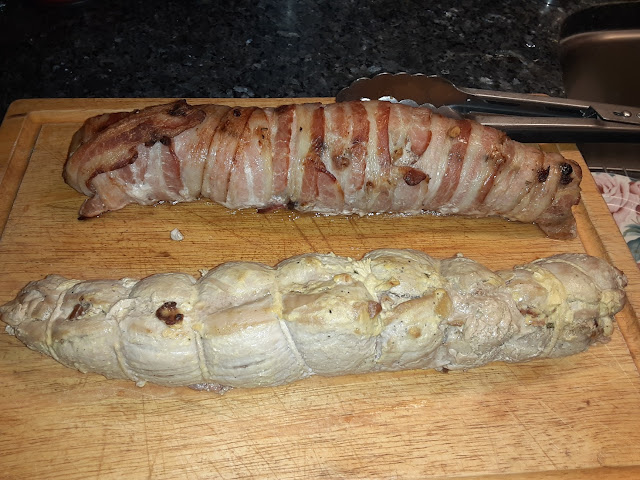 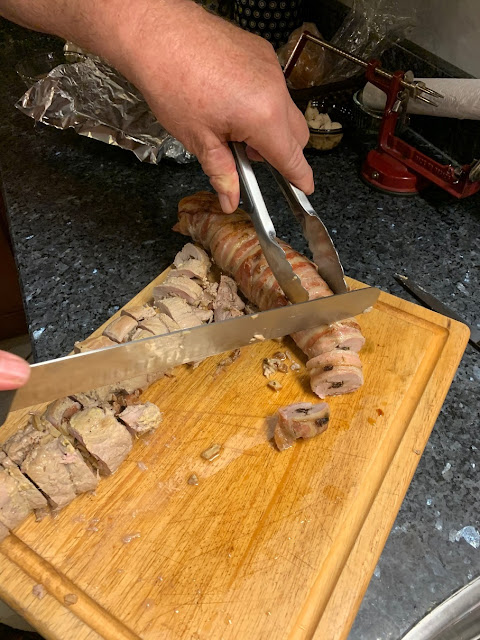 Our first sidedish was another must try dish from Pam’s recent post for MeltingPotatoes on her For The Love Of Cooking blog but rather than re-post the recipe here, you can pop over to her blog by clicking on the link to get the recipe and see her delicious pics.

Our other side was the Taste-Of-Fall Salad using the recipe from Taste of Home and Bev followed this recipe but used a little more.

Directions:
1. In a large heavy skillet, cook the pecans, 2 tablespoons vinegar, cayenne and cinnamon over medium heat until nuts are toasted, about 4 minutes. Sprinkle with 1 tablespoon sugar. 2. Cook and stir for 2-4 minutes or until sugar is melted. Spread on foil to cool.
3. Place salad greens in a large bowl. In a small bowl, whisk the oil, mustard, salt and remaining vinegar and sugar; drizzle over greens and toss to coat.
4. Arrange the greens, pear slices and pecans on six salad plates. Sprinkle with cheese. 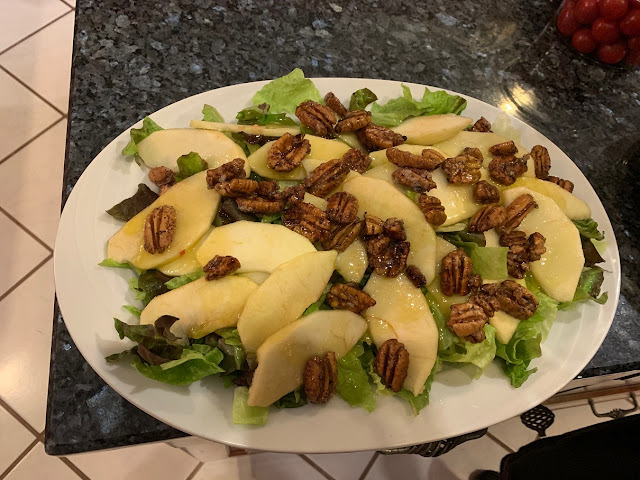 What began as a simple meal just to try the first pork recipe and the melting potatoes ended up being a full-blown company meal less desert when I decided to invite the neighbors down to eat and watch the Tennessee football game.  This is my plate which I did not finish. 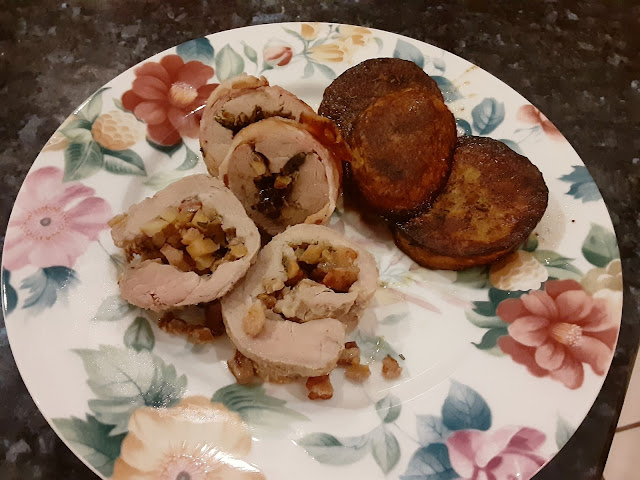 The meal got varied reviews but everyone especially liked something and the neighbor asked for the recipe for the stuffed pork loin (which Bev didn't like) and the potatoes but my favorite item was the bacon wrapped pork, especially with the sauce, and I’ve never met a potato I didn’t like.  Everyone loved Bev’s salad.

The one change I would make next time is pound the pork down to a ¼“ thickness for easier rolling.

It was a good evening, a good meal, and Tennessee won the ball game – what else could we want.