Visit With Our Kids and Grandkids – Part 2 – Karaoke (Humorous)

Our good friends Carol and Joe are big time Karaoke fans and have a real set up for doing it including some big speakers and hundreds of fully cataloged songs on CD’s.  Since many of our family are singers, we decide it would make for a good activity following the Low Country Boil on the dock and as I found out later several of them were expecting a boring evening.

As is usually the case, folks are reluctant to get up to the mic but since I’m the worst singer in the group and don’t worry about what they think, I went first with brave granddaughter Katelyn.  Here is a shot of the audience with several looking through the song lists. 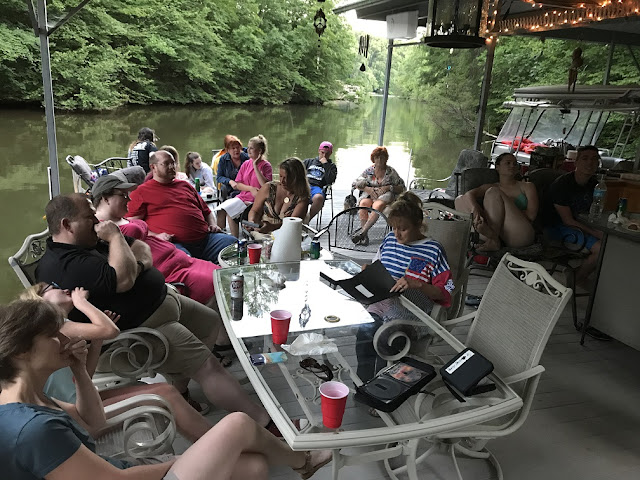 All of the adults and several of the kids sang at least on song and several folks were pretty darned good.  Here are some videos and I suggest you watch at least part part of the first one for a laugh and of the last one for the singers.  If clicking on the song name doesn't bring up the video, you can copy and paste the link.

Ring Of Fire (https://www.youtube.com/watch?v=Vu0x702spSo&t=44s) with Katelyn and Larry

The Lion Sleeps Tonight (https://youtu.be/xm-jIBWel-4) with Eric, Ann, and Sophia

How Great Thou Art (https://youtu.be/F5eu5dOSsPs) with Kathy, Eric, and Wende

We had a blast as evidenced by the big smiles on all of the faces including those concerned about being bored.  Unfortunately a couple of the best performances did not get videoed.