Bev had a whole chicken and some refrigerator pie crust that she wanted to use and I’d just seen pictures of a delicious looking version from a blogger buddy, so we opted for pot pie.  While it is usually made with leftover poultry, we decided there was no reason not to start with raw chicken and I found a recipe from Taste of Home that would give use the proportions we needed and included potatoes.  Bev usually makes pot pie without a recipe and it is sometimes too runny or too dry, so I was hopeful a recipe would help with that and we’ve always like recipes from Taste Of Home.

Since the recipe called for three cups of chicken broth and I wanted all of the chicken flavor to end up in the pot pie, I cut up the bird, and added it to a pot along with three cups of water and some S&P– this was in lieu of roasting the chicken and then using a separate broth. 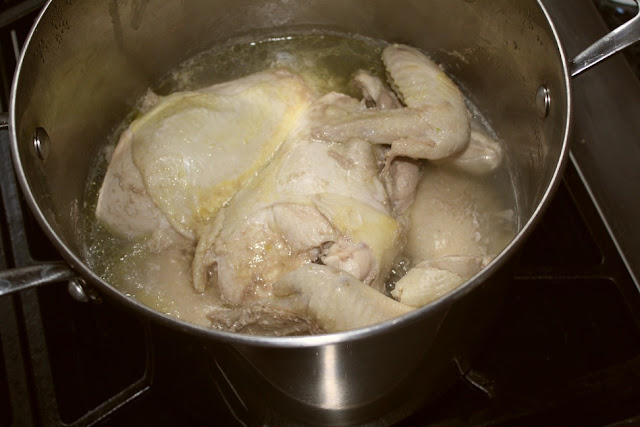 Since I wanted to use as few pans as possible, I altered the directions some but you can see the original by clicking on the link above.

Directions:
1. Place the cut up chicken pieces in a stock pot and add three cups of water and a little salt and pepper. Cover, bring to a boil then simmer until breast internal temperature is 165F.  2. 2. Remove chicken and allow to cool enough to handle.
3. Add carrots and potatoes to the broth and cook until tender then remove them from the broth to a bowl.
4. Strain the broth into a four cup measuring cup and adjust as needed to get three cups.
5. Preheat oven to 425°.
6. Rinse out the pan and heat butter over medium heat. Add onion and celery and cook and stir until tender.
7. While the onions cook, shape the two round pieces of pie dough to fit the top of a 9”x13” casserole dish.  (The original recipe called for two packages of dough for a top and bottom crust in two pie pans, but I wanted to try it this way.)
8. Stir in flour and seasonings into the onions and carrots until blended and cook for a few minutes to cook the flour.
9. Gradually stir in broth and milk. Bring to a boil, stirring constantly; cook and stir until thickened. Stir in chicken, peas, and potato mixture; remove from heat.
10. Spray a 9”x13” casserole dish with Pam and add the chicken mixture.  Place the pastry over filling, flute edges, and cut slits in top. 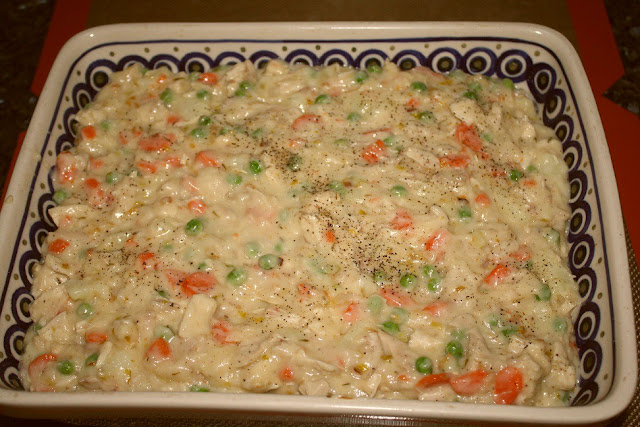 Bake 35-40 minutes or until crust is lightly browned. Cover with foil if crust gets too brown.  Let stand 15 minutes before cutting. 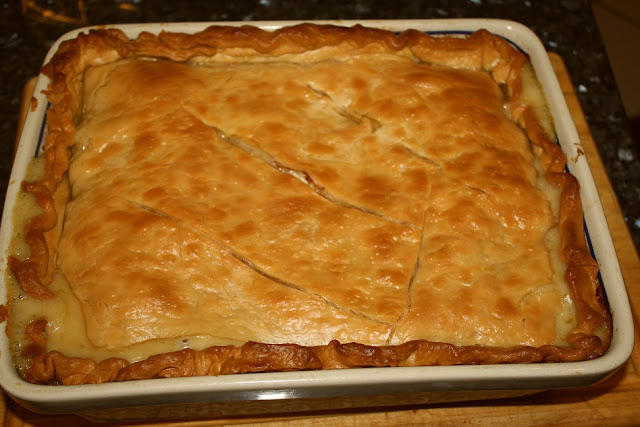 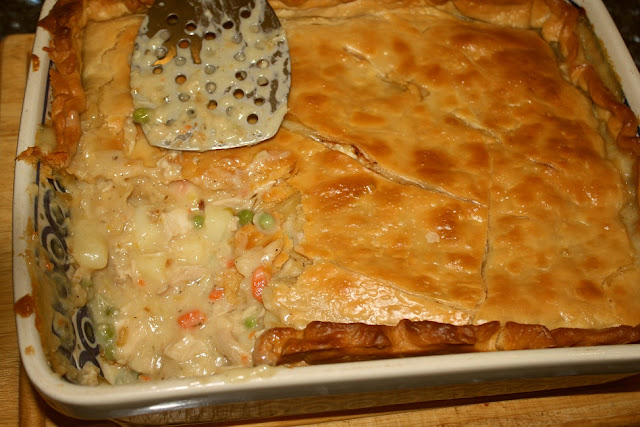 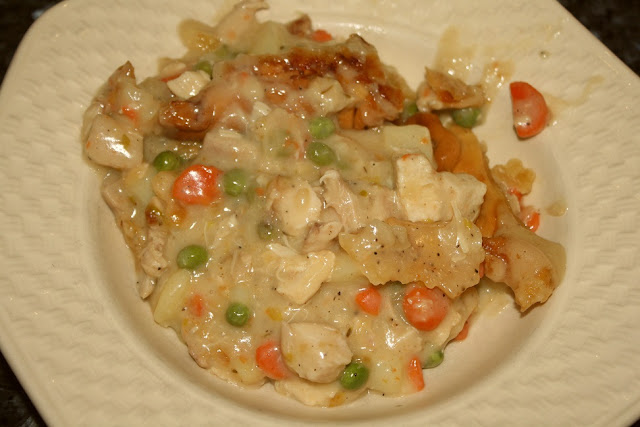 After seeing how thick the filling was in the pan, Bev convinced me to add about a half cup of milk and as you can see the filling bled out pretty bad when we cut the pie.  Bev still said she likes it to be even runnier than this.  Since I know her preference is for a pot pie topped with biscuits which does indeed require more liquid, I knew where she was coming from.  But for this type, I would not add more liquid than the recipe calls for.  Next time I’ll use this recipe, add extra broth, and top with biscuits just for her - but will definitely use this recipe for future poultry pot pies.

Having said that, we thought it was delicious and as good as I have ever eaten, so definitely a keeper recipe and I only had one pan and the dish to hand wash – everything else in the dishwasher.

As I write this at 6:30am, we are just over a week removed from an early morning temperature of 7F and with snow on the ground, but this morning it is 64F.  That’s a whopping 57 degree change and the daffodil’s are up about 3” – hard to believe the change.