On Sunday, we drove around downtown KC, for the first time, to get a sense of it then headed south a few miles to the Country Club Plaza area for some shopping and a BBQ fix for Bev.  While the down town area was pretty void of people, I discovered why when we got to the plaza as it was very crowded.

Country Club Plaza is a unique and highly successful shopping area and here are a few excerpts from Wikipedia – “The center consists of 18 separate buildings representing 804,000 square feet of retail space and 468,000 square feet of office space.[1] The standalone buildings are built in a distinctive Seville Spain theme and are on different blocks mostly west of Main Street and mostly north of Brush Creek and blends into the Country Club neighborhood around it and the whole area is often simply called the "The Plaza."  “…the neighborhood developed by J.C. Nichols which surrounded the Kansas City Country Club.”  “When his plans were first announced, the project was dubbed 'Nichols' Folly' because of the then seemingly undesirable location…”  “The Plaza opened in 1923 to immediate success, and has lasted with little interruption since that year.”

If ever in the KC area and you enjoy shopping, this is a must visit place.  Here are a few shots from the web: 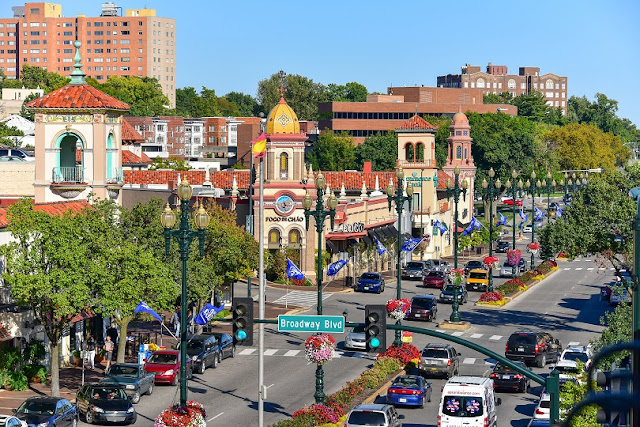 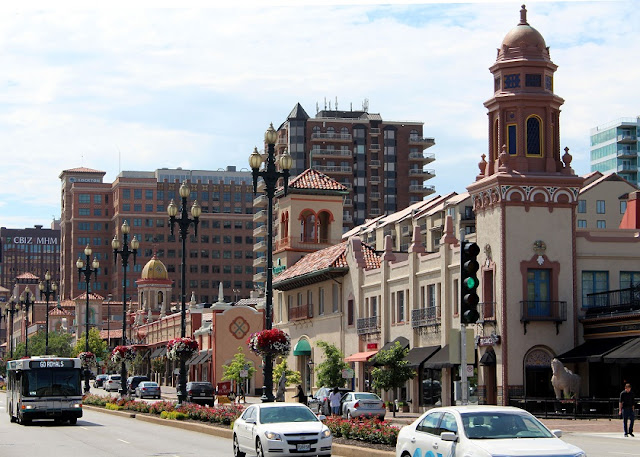 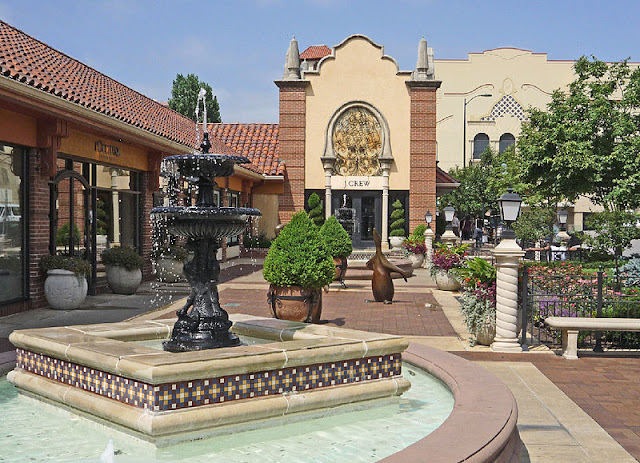 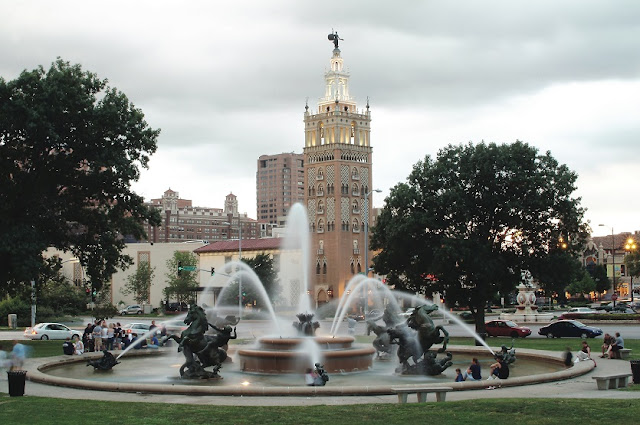 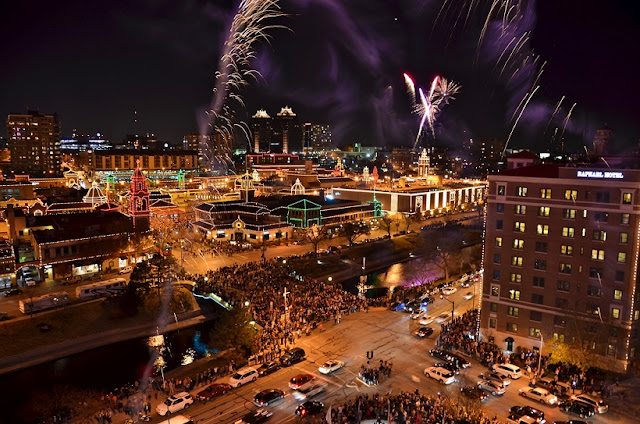 While the girls did a little shopping in the 95F heat, I warmed a seat at the air conditioned Jack Stack BBQ bar and had a couple of IPA beers from the local Boulevard Brewing Co.  Bev said she could not come to KC and not eat BBQ, which brought us to The Plaza area and Jack Stack and while we intended to just get a sandwich, we went overboard with a full blown meal.  This is Bev’s plate with burnt ends and sliced brisket and Rileys BBQ stuffed potato. 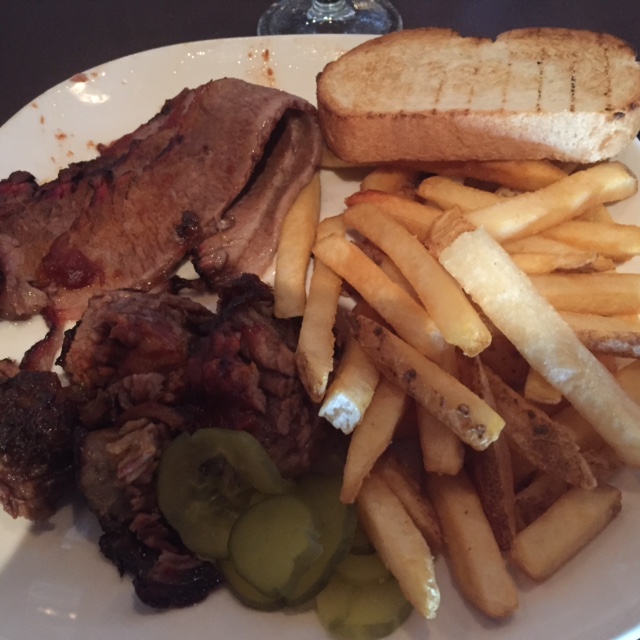 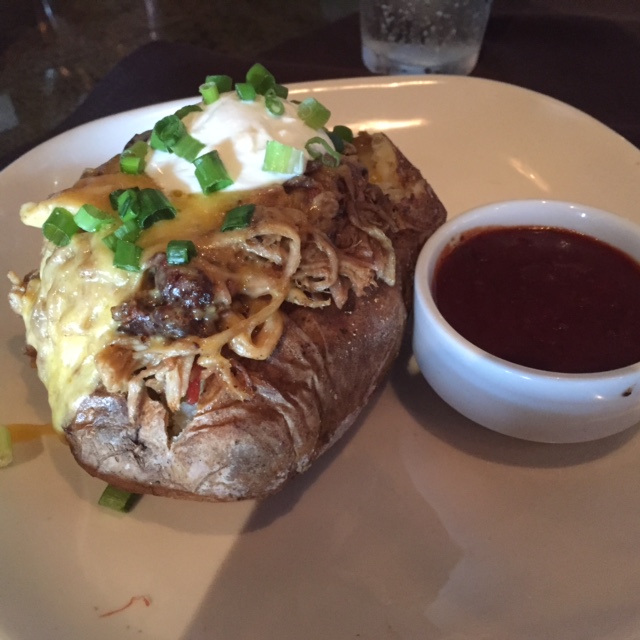 I also had burnt ends and everyone thought their food was very good.

That evening, we fulfilled another Beverly need – “I can’t go to Kansas City and not eat a steak” – by going to J. Gilberts in Overland Park along with KC friends Dave and Jackie.  We had a pretty good plan for the day but we threw it off a little by overeating at lunch, so I wasn’t real hungry at suppertime – Pat even opted not to go.  J. Gilberts has a three course meal for $43 that includes soup or salad, entrée with two sides, and dessert.  The others had that and I had the regular meal that omits the salad and dessert, plus I went with the lighter salmon rather than beef – this is mine, followed by Bev’s six ounce filet and Rileys small filet and scallops: 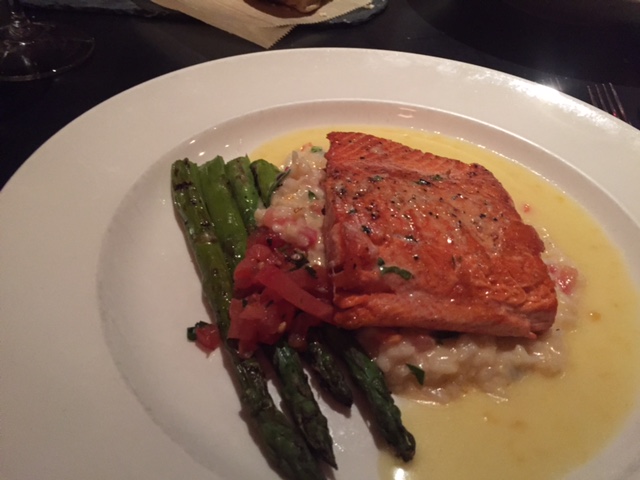 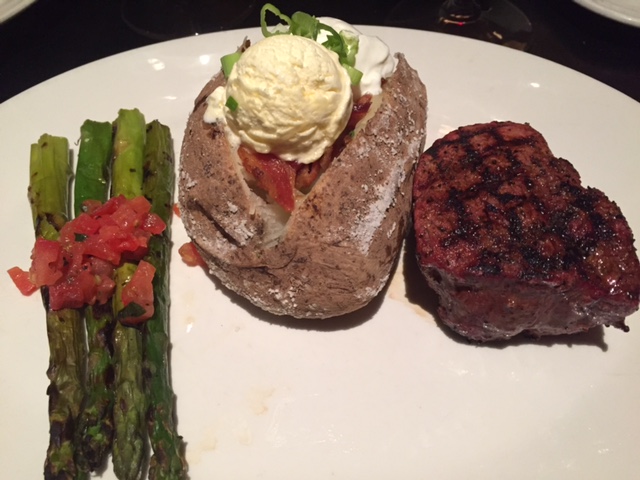 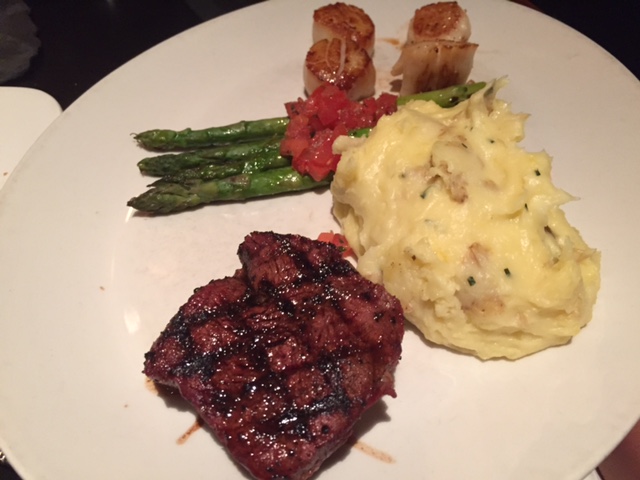 While it was a little pricey, it was well worth it as the ambiance, service, and food were all excellent and I would recommend it to anyone – definitely not tourist food (mediocre food at a high price).

After an evening at Dave and Jackie’s and a day well spent in KC I would say our stop in the area was a roaring success (especially from a food standpoint) and we’ll look forward to next time.  It was also a good stop for fulfilling Riley's primary trip objective - eat lots of good food.

On Monday, we headed west for an overnight stop at the WaKeeney, KS KOA (site 12), where we had stayed last year and found it to be perfect for an overnight stop.  It is about half way between KC and Denver and their long pull-thru sites allowed the car to remain hooked up to Sweetie.  I-70 was a good road with pretty light traffic once we got out of the KC area – a nice travel day it was.