We were having a cold Saturday and Bev decided it was perfect weather for cabbage rolls, but after discussing we decided they were a lot of work and maybe we could make the same dish as a casserole.  So I went on line looking for recipes and liked one for Deconstructed Stuffed Cabbage Casserole from Kalyn’s Kitchen but I preferred Emeril’s recipe for cabbage roll stuffing so we combined the two, scaled it for the meat we had and threw in another ingredient  - my cousin always adds some sour kraut to her sauce when she makes them.  We were making extra so we would have a casserole for dinner, one to freeze for our upcoming RV trip, and one for a friend.   For a normal recipe, divide everything by three.

Directions:
1. Preheat oven to 350F.  Spray two large glass or crockery casserole dishs (9x13) with non-stick spray.
2. Heat 1-2 tbsp. olive oil in a large stock pot, add ground beef and cook until it's done and nicely browned, breaking apart as it cooks.  Remove ground beef to a bowl.
3. In the same pan, add a little more olive oil if needed, then add chopped onion and cook over medium heat until the onion is translucent and starting to brown, about 5 minutes.  Add the minced garlic, Essence, S&P and cook about 2 minutes more.  Then add the diced tomatoes with juice and ground beef.  Let mixture simmer until it's hot and slightly thickened, about 30 minutes.
4. While the meat mixture simmers, cut cabbage in half, cut out the core, and remove any wilted outer leaves, and then chop the cabbage coarsely into pieces.  (They don't have to be all the same size.  I chopped it into pieces that varied from 1/2 inch to 1 1/2 inches.)  Heat about 1 tbsp. olive oil in another large pan with high sides, add the cabbage and cook over medium-high heat until the cabbage is wilted and about half cooked, turning it over several times so it all wilts and cooks - we used a lid for about 3/4 of the process.  Season cabbage with salt and fresh-ground black pepper. 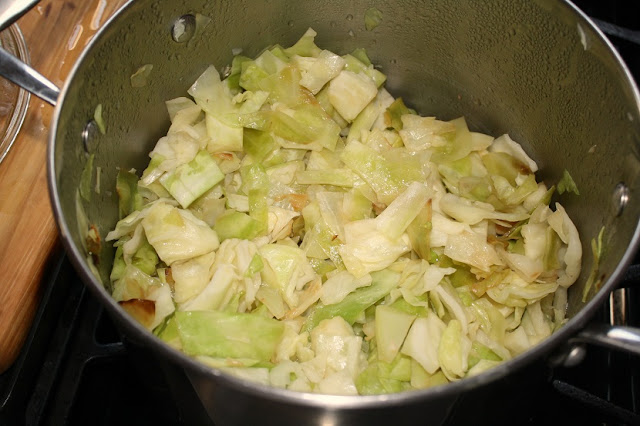 5. Also while the meat simmers, cook the rice per package directions.
6. When the meat and tomato sauce mixture has cooked about 30 minutes and thickened a bit, stir in the 5 cups of cooked rice and gently combine. 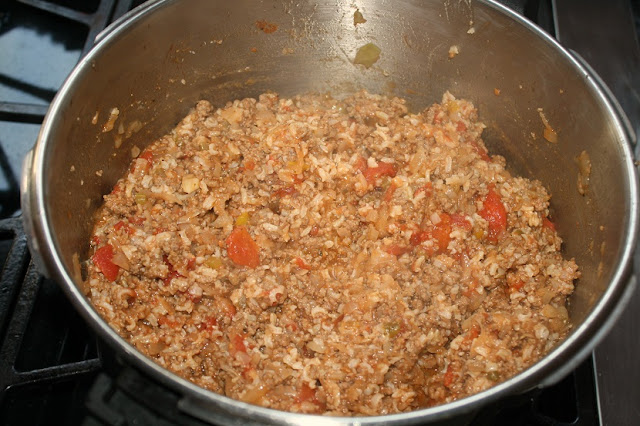 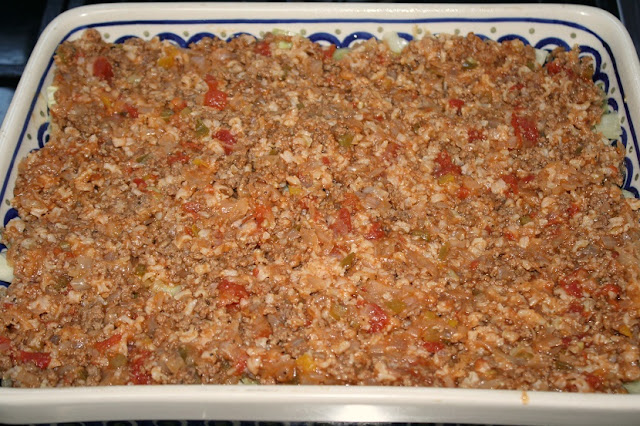 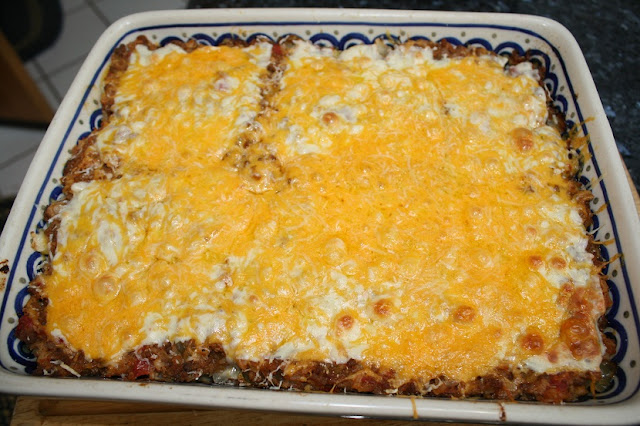 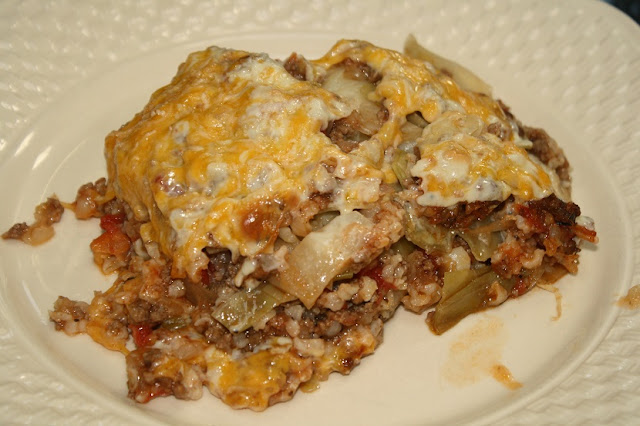 It didn't exactly taste like cabbage rolls, especially with the cheese on it, but Bev and I both thought it was delicious in it's own right and would make it again with a couple of adjustments - we would add a can of tomato sauce and a can of paste as it was not tomatoey enough.