Bev had a dozen ears of good, fresh, young corn and since the weather had cooled, she decided to make it into corn chowder.  She checked the web and decided she liked the recipe from Pioneer Woman for Corn & Cheese Chowder, but she adapted it a quite a bit - click on the link for the original.  I would like Ree’s site if she didn’t show a half dozen photos of adding salt to a dish – a slight exaggeration.

Notes:  We used about twice the recipe amount of corn - maybe 4 cups and Bev wanted the flavor that grilling it adds.  Bev thought the addition of potatoes was a must.  The recipe calls for 3 slices of bacon in the soup, but she prefers it as a crispy garnish so we added some bacon fat for the flavor instead.  We had no green onions to put in the soup so we used chopped chives as a garnish.

Instructions:
1. Shuck corn, rub with oil and grill over high heat to caramelize a little.  Cool enough to handle, cut kernels off cobs, and scrap the cobs with a knife edge.  Set aside
2. In a large pot, melt butter and bacon fat over medium-high heat. Cook onions for a couple of minutes, then add diced bell peppers and cook for a couple of minutes.
3. Sprinkle flour evenly over the top and stir to combine.
4. Slowly stir in broth and and allow this to thicken for 3 or 4 minutes, then reduce heat to medium.  It should be pretty thick as the liquid from the potatoes will thin it.
5. Add the potatoes and cook until almost tender.
6. Stir in the cooked corn.
5. Stir in half-and-half, then cover and allow to simmer/thicken for 15 minutes or so.
6. Stir in cheeses and green onions (Bev forgot these).
7. When cheese is melted and the soup is hot, check seasonings and add salt and pepper as needed.
8. Check thickness and add a little corn starch mixed with a little half and half to get it where you want it.

To go with the chowder, Bev decided to make a batch of her Mexican cornbread , baked as muffins and she had bacon, red onion, chives, and cheese as garnishes.  I first made up my dish but since it hid the pretty muffin, I made Bev’s differently. 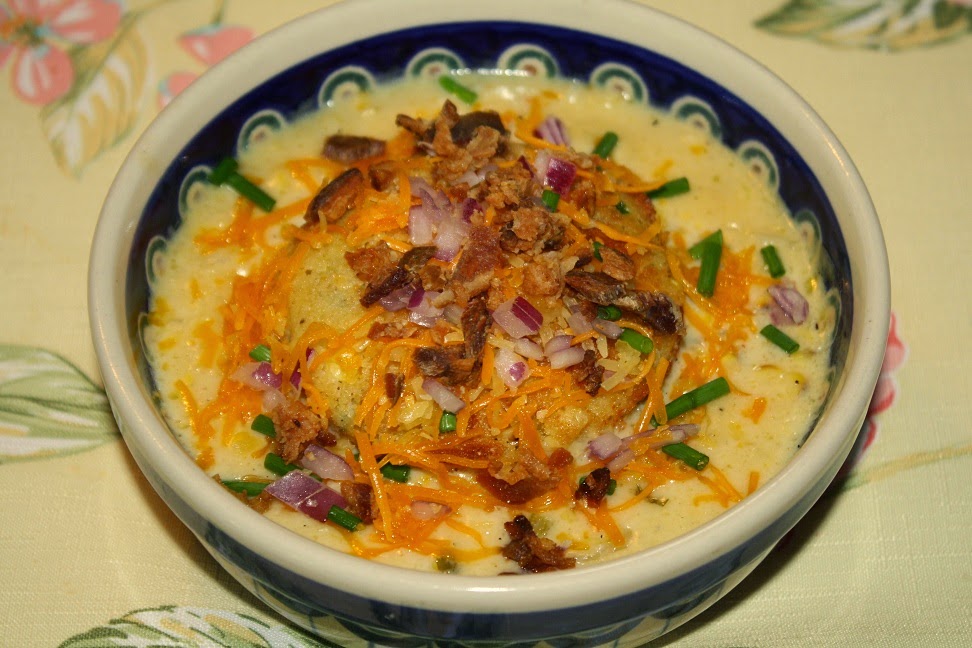 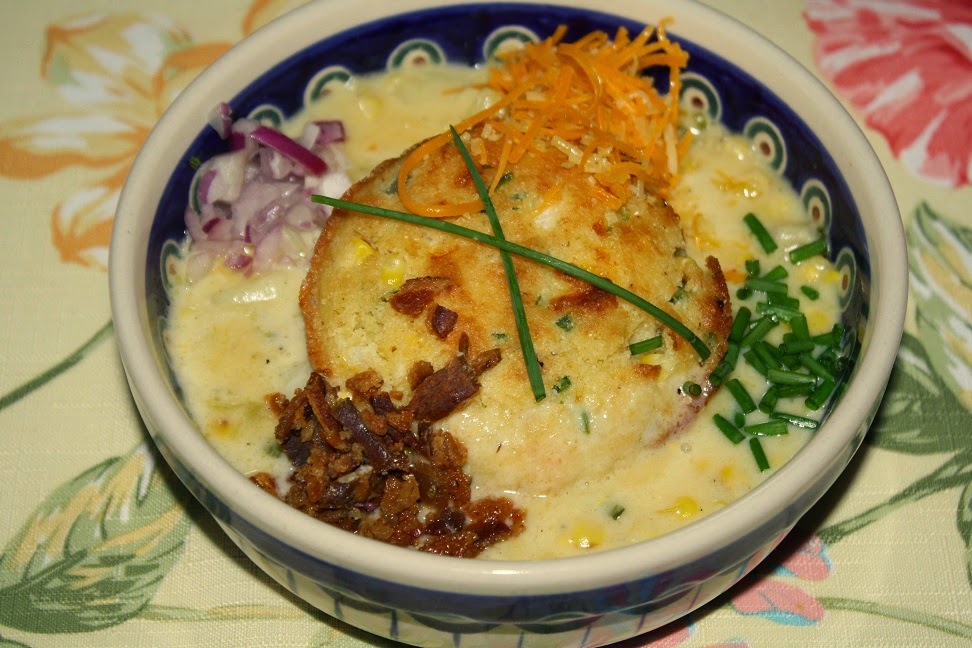 The soup and the cornbread were each delicious but I mixed mine all up together (southern style) and I thought it was way good this way.  While we really liked the soup with Bev's changes, I'm confident the Ree's original would also be very good.  As an aside, we have a retired electrician friend who gladly trades us electrical work for a pan of this cornbread.