Like most families, Bev grew up in one that insisted your birthday meal be something special and she still likes to do that – ala Pat’s recent meal.  She’d been asking me what I wanted and several things were considered but I finally decided I wanted something good but very easy for both of us with little mess.

And a couple of days before the meal, rotisserie chicken with vegetables, all cooked on the grill, showed up on Penny’s blog at Lake Lure Cottage Kitchen and it looked like a great solution to my meal criteria.

I decided to cook two chickens and followed the recipe laid out by another Penny on her Comforts of Home blog with a few adaptations – more thyme into the cavity and fresh thyme and rosemary into the veggies along with the Herbs de Provence.  Please stop by both Penny’s blogs for photos and recipes.

I prepared the chickens and added them to the spit butt-to-butt, tightly to keep the goodies inside - I tightened them after this shot and once during cooking. 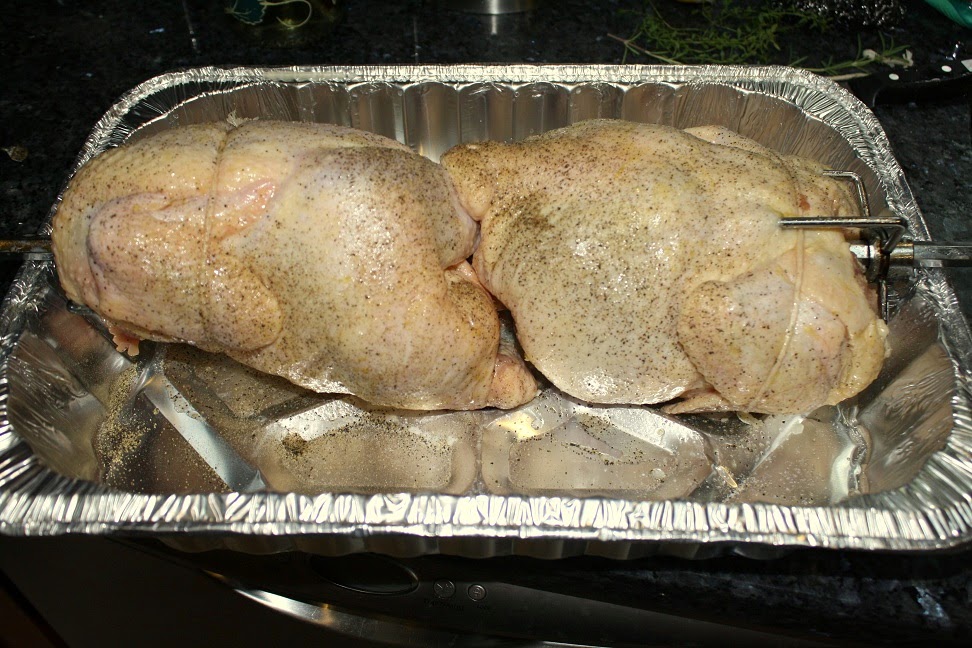 Add the veggies to a disposable pan, drizzle with olive oil, sprinkle with herbs and toss to coat. 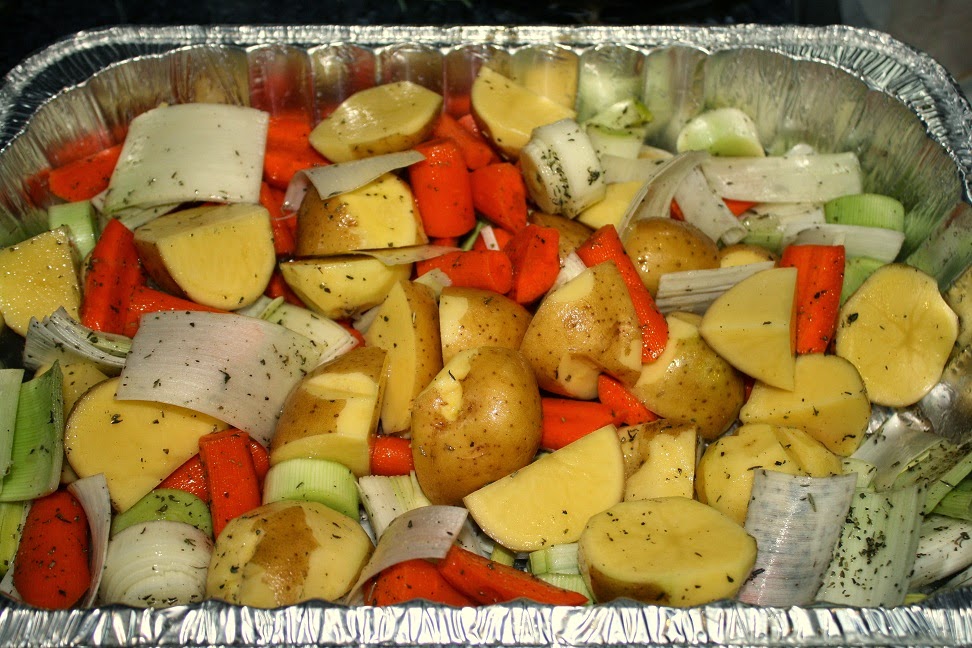 The main idea behind this recipe is to follow these direction – “Place a disposable pan underneath the chicken filled with sliced potatoes, carrots and leaks,” so the drippings can season them and it is a great idea, but I failed to look at my grill closely prior to cook time.  As it turned out, my spit was not high enough to let the pan sit on the grill grates and I had to set it clear down on the burners. 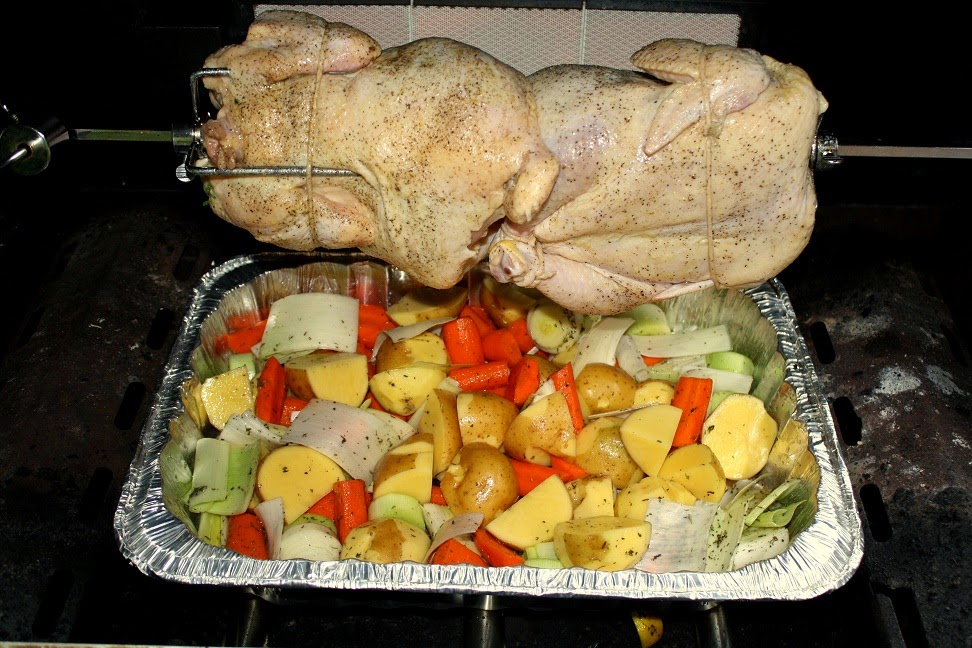 Unfortunately this put them below the heat and I improvised by putting them over low, direct heat and added a separate pan to catch the dripping which I added to the veggies as they cooked - this did require them to be turned regularly. 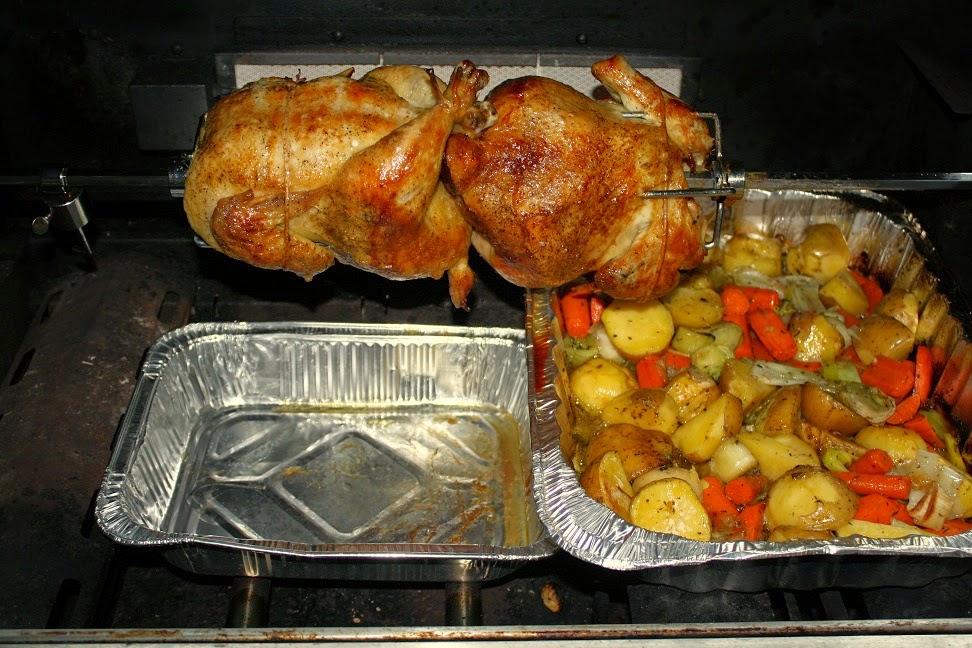 I cooked the chicken to an internal breast temperature of 165*-170* and it turned out moist and tender.  Unfortunately, by the time I relocated the veggie, there was not enough time to get them totally cooked when the chicken was done.  We just picked out the more tender pieces and I thought they were very good, especially the leeks. 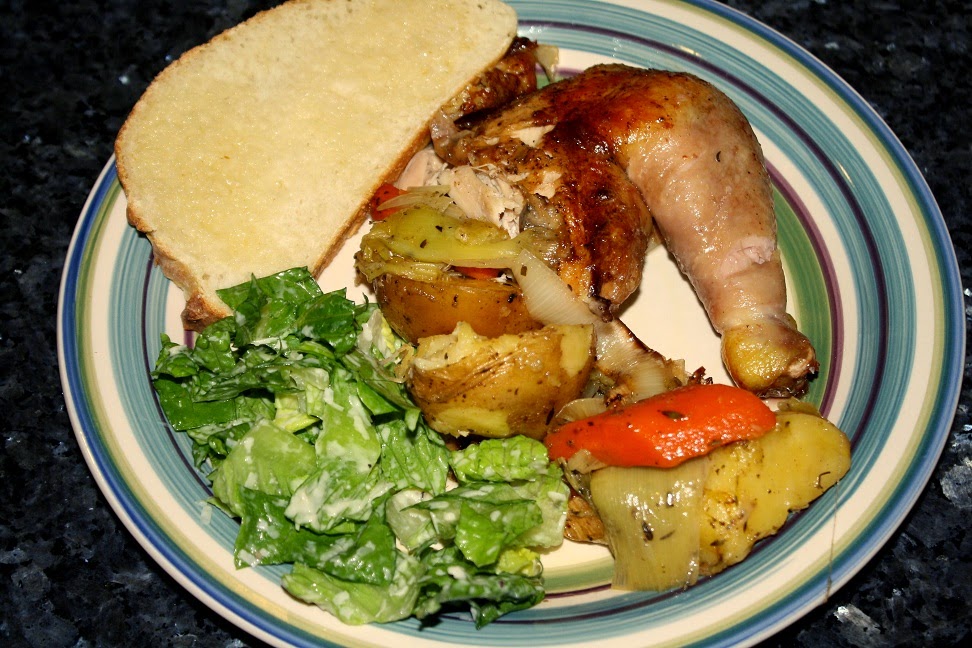 It was a good and easy meal, but the chicken needed more flavor so next time I’ll brine it and put flavorings under and on the skin, and I'll cover the pan with foil and start the veggies over direct heat sooner – removing the foil when the veggies begin to get tender.

It was a fine birthday (68 if you're wondering) and special by my standards - surrounded by loved ones, no demands made upon me, getting to do just what I wanted, and a good meal - not sure it gets much better.  Getting to do what I wanted mainly meant watching college football and WVU’s win over Maryland – it was ugly and frustrating to watch, but still a win.  Unfortunately, that evening, Tennessee’s young team, especially the offensive line, was totally manhandled by Oklahoma - WVU will likely have a similar experience this week.  Since coach Nick Saban and I share a hometown, maybe I'll become a Bama fan or I've always liked Auburn.

I hope all of your birthdays are special and you get to do just what you want.