On The Road Again - RVing In North Georgia

After getting our coach back from the dealer with all but one warranty issue completed, we made another shakedown trip to the North Georgia Mountains (we enjoyed last years visit) and ended up with an RV full.  Our normal four of Bev, Madison, Pat, and I were joined by Madison’s sisters Reese and Riley.

With Sweetie (dog) as my co-pilot, I drove the coach down to Hiawassee GA, while the girls drove over to Spartanberg, SC to meet Rhett (son) and pick up Reese and Riley – first time I’d driven that far (100 mi.) without Bev as the co-pilot so hopefully she’ll relax a little now.

The drive to Hiawassee took us up the Ocoee River Gorge, site of kayaking for the 1996 Atlanta Olympics, and it was full of rafters and kayakers and the narrow, curvy road was crowded with cars and rafting buses - note to self, avoid weekends on that road.  There had to have been 100+ rafters waiting to go at the launching point just below Ocoee #2 Dam.  They can only raft on certain days as TVA runs the water down a flume to the powerhouse during the the others yielding a dry riverbed - in other words, they turn the river on and off.

As I got to Hiawassee, I began passing the some of the many fingers of Chatuge Lake which was also loaded with Saturday boaters.  Chatuge Lake is the first of three dams built by TVA on the Hiawassee River, and it straddles the GA/NC line – with its many fingers, I can see it being very easy to get lost on – unfortunately co-pilot Sweetie didn’t get photos of any of this but here's a shot from Google Earth. 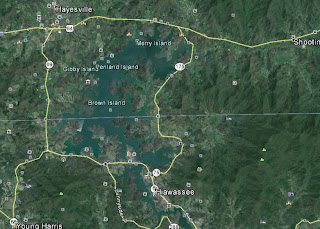 We stayed at the Riverbend Campground, just south of Hiawassee and had a nice, large site on the banks of the Hiawassee River.  The campground is upstream from Chatuga Lake and while it has only gravel roads and sites, there is plenty of room between sites and the landscaping is very nice as seen from Google Earth and some ground shots. 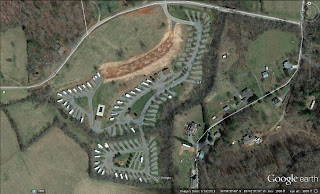 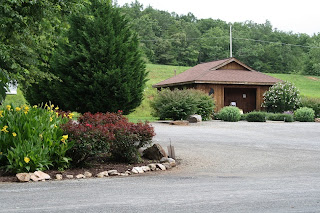 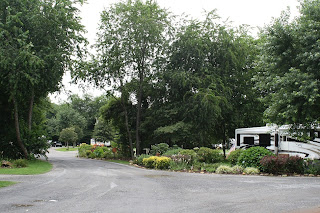 This is our spot and as can be seen, there is plenty of grassy area between campsites. 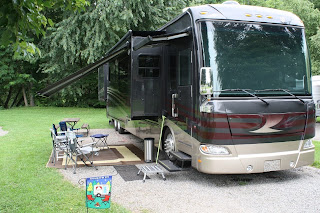 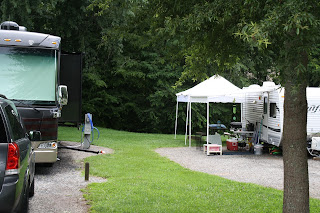 They can accommodate everything from tents to the longest rigs in their three very large pull through sites.  The office/store and bathhouses were clean and well maintained and it is obviously a family campground as it offers plenty of playing space and a nice playground - lots of kids there on the weekend. 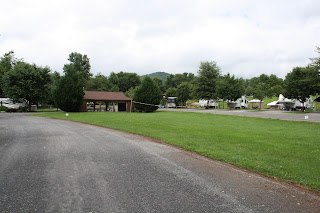 It is obviously a place associated with weekends on the lake as it was nearly vacant during the week even though many of the rented-long-term spots still had the RV's on them.  It also must be a good place to learn to drive as the kids continually rode around in golf carts.

I selected Riverbend after narrowing the choices to three from the list on RVParking.com, based on one camper review, and after driving thru the other two (Bald Mountain and the Fairgrounds), I'm convinced I stumbled into the right choice.  While not a high end RV resort, it was a very nice $34 night campground and we would definitely stay there again, but would be sure we had something to deal with the pesky flies outside as they were beyond plentiful.