As is usually the case with squash, this year were having difficulty finding a home for all of our cucumbers – I over planted and they are doing great.  We still have dill pickles from last year and I asked Bev if she’d like some bread and butter pickles to which she gave a half-hearted okay.

When I was a kid, I was fed them a lot, but always preferred the onions to the cucumbers and rather than love them, they are definitely not my favorite – I’m a garlicky dill kinda man.  I went looking for recipes and settled on one from food.com in part because it was described as “... grandmothers recipe” by the recipe writer but mostly because it had the lowest sugar to vinegar ratio I found.  I’m thinking if they are less sweet, I might enjoy them.

The recipe was from cuisinebymae on September 12, 2003 and I followed the it as written.

Directions:
1. Combine cucumbers, onions, salt and ice in a large bowl and mix well.
2. Put a weight on and allow to stand 3 hours. (For a weight, I use a plate with a gallon bottle of vinegar or water on top of it).
3. Drain thoroughly.
4. Combine vinegar, sugar, turmeric, celery seed, and mustard seed in a large pot.
5. Add drained cucumbers and place pot on medium low heat.
6. Bring almost to a boil, but DO NOT ALLOW TO BOIL.
7. Remove from heat.
8. Seal in sterilized jars, 10 minutes in a hot water bath. (I put mine in a 3 quart jar and did not process them but will keep them in the fridge instead) 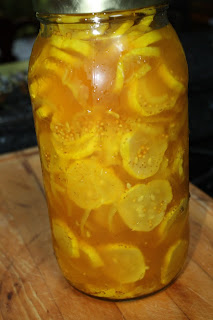 Bev tried some when they'd cooled to room temperature and said she absolutely loved them - unlike the days required for dills, these begin to taste pickled after just a few hours.  Then, rather than the half-hearted okay, she enthusiastically wanted to make some more as soon as we had enough cukes.  We both liked the yellow color given to the white skinned cukes by the turmeric and mustard seeds.