We love Cuban sandwiches and enjoy getting them from the Aroma Café in Maryville where they seem to be authentic - our first was in Little Havana in Miami.  Since we had some pork left form our Luau Blogger Party (header shot above), Bev decided we should make them for supper.  A Cuban sandwich is basically roasted pork, ham, Swiss cheese, mustard, and dill pickle on Cuban bread (we had to use French).

One of the things we like from Aroma Café is their Mojo Sauce and we decided to try making our own using a recipe from food.com because it contained cumin and both oregano and cilantro.

Directions:
1. In a medium or large saucepan heat olive oil over medium heat.
2. Add garlic and cook until JUST light brown.
3. Turn off heat and let stand 5 minutes.
4. Stir in the sour orange juice, water, oregano, cumin, salt and pepper.
5. Heat mixture on high until a full, rolling boil is reached.
6. Boil for 2 minutes stirring a few times.
7. Remove from heat and allow mixture to come to room temperature.
8. Stir in cilantro.
9. Pour into a jar or shaker bottle with a tight fitting lid and shake well before using.

Notes: The recipe called for sour orange juice and has a different ratio of orange to lime juice than the one we used to make it.  Also the directions mention water but there was none in the ingredients list.

Then we grilled them in our Panini press. 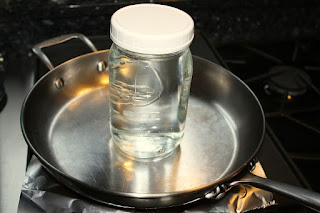 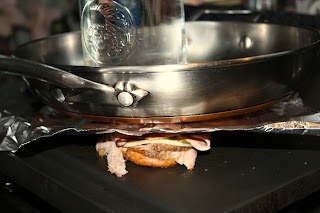 The trick is to keep moving the jar to keep it level as the bread settles and this was the result. 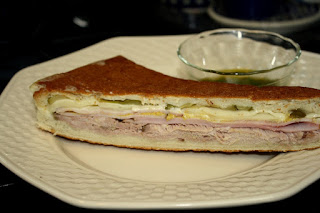 Not to take anything from the Cuban restaurants I've been to, but this was as good as I've ever had and the sauce was very good as well.  All of the sauce recipes I found used oil in the sauce, but Aroma Café’s seemed to just use water and we may give it a try next time.   I also may have to cook up and freeze a couple more pork butts like I did for the luau while I have banana leaves available.