Finally, its spring time and we’re ready to plant.  We prepared our soil well in the fall and put our garden to bed properly, then spent the winter fine tuning our garden plan procuring our seeds and transplants.  The weather has cooperated and allowed us to till the garden early and we have our seeds and carefully selected plants in hand and ready to put in the ground.

Before we plant anything though, we need to look at an important date – the average date of the last frost for your area.  Notice it isn’t the absolute last frost date but the average, so there could be frosts after this date in any given year.  Some cool weather plants say to plant them as soon as the ground can be worked and that’s what I do – sometimes I even plant them before the ground can be worked.  For the tender plants, however, you’ll have to decide how much risk you’re willing to take to get an earlier harvest and will you be able to protect things if a frost comes?


LAYOUT GARDEN PER YOUR PLAN – So the first thing you do after tilling is to layout the garden according to the plan and layoff the rows.  I like to use a string to achieve straight rows as everything else works better when they are.  If you are on much of a slope, you should use contour rows across to slope to minimize erosion.
FERTILIZE – Once I have a row laid out for seeds, I apply the appropriate fertilizer along the row – if you’re not sure what else to use, 6-12-12 is a good general purpose blend.  Apply synthetic fertilizer at rates recommended on the container or you risk over fertilizing.  Organic fertilizer is more forgiving as the plants just use what they need.
PLANT SEEDS – After I’ve laid out and fertilized the rows, I use my hoe corner to make a row of the appropriate depth and work the fertilizer into the soil.  The furrow depth is an important point as most seeds only have enough stored energy to emerge from a specific depth and in general they should be planted 2-4 times the seed diameter.  Some, such as corn, can be planted deeper while other such, as lettuce, can be on top of the ground.  If you get poor seed germination using seeds from a reliable supplier, they were likely planted too deep.
PLANT TRANSPLANTS – Before planting, I inspect the plants one last time to be sure they are healthy and free of bugs and disease.  Then I dig a hole of the proper depth, mix in a handful of compost and any other amendments I want to make, then plant them just a little deeper than they were in their pot – except for tomatoes which I covered earlier.  I then put a ring of the appropriate fertilizer around the plants 3-4" from the stem (none yet for tomatoes and peppers).
Some plants, such as tomatoes, respond well to transplanting while others, such as cukes, squash, etc., do not like to have their roots disturbed.   For them I have better luck and earlier harvests just planting seeds, but if you must use plants, the peat pots work best as the root disturbance is minimized – just remove the pot bottom before planting and make sure none of it sticks out of the ground as it will wick water and dry out the roots.  I ran an experiment where I grew some transplants and when I planted them, I planted some seeds from the same packet and the seeds delivered first.
MULCH – Mulch is generally used to control weeds and hold moisture in the soil.  I’ve used black plastic, newspapers, and straw and I prefer straw.  Any non-organic material must be taken up at seasons end and disposed of where the organic material can just be tilled in and help to improve the soil.  I prefer straw to newspaper as it stays in place much easier without having to be anchored in some way and it seems more durable to me.  I would not use hay as it will be full of unwanted weed and grass seeds. I don’t mulch everything but probably should, but it’s really a personal choice – a good garden can be grown without mulching.
PRE-EMERGENT HERBICIDE – This is another personal choice issue and depends upon how you want to garden.  Pre-emergents can be synthetic, such as Preen, or organic, such as corn gluten.  I’ve not used the corn gluten but regularly use Preen in places that are difficult to maintain, such as asparagus.  Generally they only work for about 3 months and must therefore be applied three times during the growing season for full control.
In summary, plant good seeds and plants at the proper time to the proper depth with the proper fertilizer and you’re off to a great start.

Bev made a table center piece of some of our peppers for a recent dinner party and it generated a humorous event. 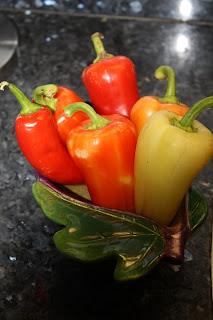 All but one of the peppers are a new variety for me called Sante Fe and are described in Wikipedia as " The Santa Fe Grande is a very prolific variety used in the Southwestern United States. The conical, blunt fruits ripen from greenish-yellow, to orange-yellow to red. The peppers grow upright on 24" plants. Santa Fe Grande's have a slightly sweet taste and are fairly mild in pungency."  Somewhere else they were described as having a Scoville rating of 500-700 making them similar to the mild Anaheim variety.

One of the diners, Bill,  decided too try one and said it was pretty hot and when tried by Tabasco-on-everything Dave, he also proclaimed them pretty hot.  Well I knew what I'd read and thought they must be mistaken so I took a bite, which I immediately spit into my hand and tossed into the lake, to much heckling from those who had at least swallowed theirs.  I had great plans for using them as stuffed peppers but will now have to rethink this.
All photos can be enlarged by clicking on them.
Have a great day and thanks for stopping by Almost Heaven South.
One year ago:  Chandlers Deli In Knoxville
Larry
Posted by Big Dude at 7:56 AM