Bev and I had planned to can tomato juice on Sunday, but I worked hard to beg off.  Finally she asked if I’d make the juice if she picked the tomatoes and prepped them – I just couldn’t say no.  She picked a little over half bushel and got them all ready to cook which took about an hour.  I used our normal juicing process and got 8 ½ quarts, seven of which I canned and the rest went into the fridge for the next batch. 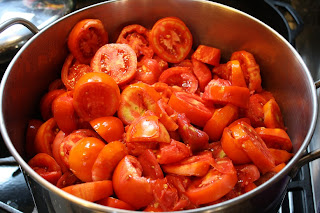 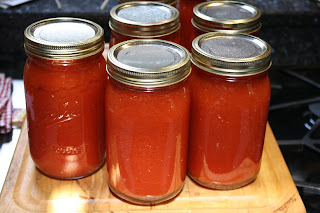 We had 7 quarts left from last year which will be used first.
I’ve lived in East Tennessee since 1969 and now live about an hours drive from Dollywood.  Even though three of our four kids worked there, I think I’ve only been two or perhaps three times and I’ve never seen East Tennessee legend and all around great ambassador (and personal fantasy) Dolly Parton in a live concert.  When it came out that she would be performing in concert in Knoxville for the first time in 25 years and we believed that since we are now senior citizens, including Dolly, this may be are last opportunity.  So we bought tickets and headed for Knoxville for a concert that started just before my bedtime.
This was the first stop of her Better Day World Tour, which contains 39 performances in the US, Europe, and Australia between now and Nov 26 with the proceeds from the Knoxville stop going to her ImaginationLibrary.
The concert began at 8pm with a 20 minute intermission at 9:25, resumed at 9:45 and went until 10:30.  Dolly sang every song, played at least 8 different instruments, including a sax and harmonica, and sang a variety of new and old songs.  She danced, waved, wiggled, and in general was high energy nearly the entire time.  She put on an outstanding show for a person of youth but for a 65 year old, I was flabbergasted.
I took no pictures and our seats were not too good, but it was a fantastic concert put on by a group of obviously talented professionals and if it comes near you, you’d be doing yourself a big favor by attending – dates on the tour link above.  I had no trouble staying awake past my bedtime.  Here's a shot from The Knoxville News Sentinel - she was sharp enough to wear orange and sing RockyTop. 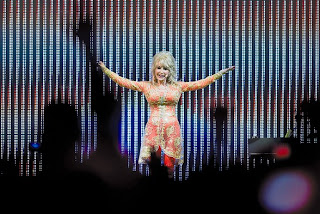 Where else but America could a poor country girl, one of 12 children, from up in the holler in the East Tennessee Mountains take some talent, some ambition, some plastic surgery and parley it into becoming a Brand?   She is truly the All American Success Story and has done great works for her home area.
All photos can be enlarged by clicking on them.
Have a great day and thanks for stopping by Almost Heaven South.
One year ago:  Grilled Pork Tenderloin Filet
Larry
Posted by Big Dude at 5:12 AM