We had some Naan bread in the fridge that Bev wanted to turn into pizza and I’d been wanting something Greek, so Greek pizza it was.  She built the pizza in the following order:


Olive oil
Red and yellow tomatoes
Fresh oregano, rosemary, and thyme
Grated parmesan
Onion and roasted red peppers
Kalamata olives
Jalapenos (had no pepperoncini’s)
I noticed when I wrote this up that we forgot garlic - drat 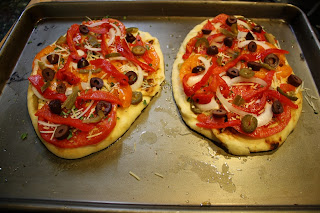 I preheated the grill then turned off the three middle burners and added the pizzas.  I cooked them like this until the veggies had softened, then added some feta and mozzarella and turned the burners under the pizzas on low to crisp the crust.  I ended up putting them under the toaster oven broiler to finished the cheese melt. 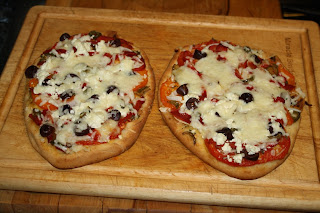 They were very good and took care of my Greek craving – Bev pointed out it was a meatless meal.
All photos can be enlarged by clicking on them.
Have a great day and thanks for stopping by Almost Heaven South.
One year ago:  Grilled Ratatouille And Shrimp
Larry
Posted by Big Dude at 4:33 AM