Our friends and neighbors (up on the hill), went RVing last summer in Alaska and were kind enough to bring us a few things, one of which was Smoked Salmon Spread from Copper River Seafood. I just recently retrieved it from the freezer and it was delicious. After eating it all by myself (Bev doesn’t like it – yeah), I decided I had to try and make some.

There are lots of recipes on the web using a variety of ingredients, but in reading CR's ingredients list it was smoked salmon, cream cheese, onion, Worcestershire sauce, and lemon pepper. I decided to start with these and add more if needed – I looked at other recipes to give me a sense of how much of the last three ingredients go with the salmon weight.

Living where we do, wild-caught-three-days-ago-smoked-for-two-days-and delivered-to-the-market-today salmon is not readily available, so I bought 8oz of alderwood smoked, farm raised, coho salmon – which I thought was pretty good. Many recipes I looked at had more dairy than salmon, but since the first ingredient on the Copper River spread was salmon, I started with an even amount, giving me this initial recipe:

After mixing, I thought it was so stiff it would break the cracker when spreading, so I added 1 cup of sour cream, which many recipes already contained. I thought it was very good right then, but decided to let the flavors marry a day, then play with it some more.

As you might expect, it was even better the next day. But, I decided to add 1 tbsp of drained and rough chopped capers to one cup of it and 1 tsp of dried dill weed to another cup. After tasting the next day, I thought the capers were about right but the dill was too strong.

I had previously made a smaller recipe and for it I added the salmon at the beginning of the mixing process. Due to the heavy mixing required to blend in the cheese, I got the uniform appearance of pink cheese - the one from Copper River had little pieces of the fish in it. So for this batch, I mixed everything but the salmon and then added it and mixed until I had the appearance I was looking for.

This is the plain, dill, and caper versions. 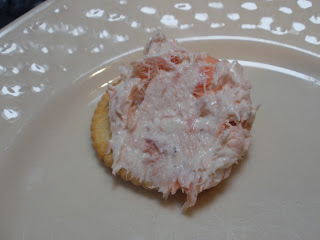 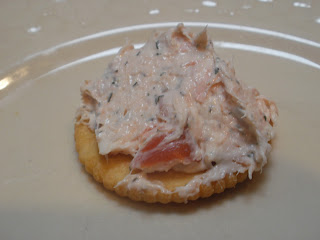 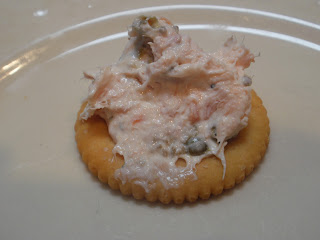 Since Bev's not available to me as a taste tester, I called on the neighbor who gave me the Copper River spread and had tasted several in Alaska. She tried all three and thought: the ones with dill or capers were better than plain, the dill one was just right, and the caper one needed more - obviously different than what I thought.  Then we decided to mix the dill and caper versions and she liked it best.  Unfortunately, I'm going to have to eat more experimentation, but all of these are delicious.

After I get the spread recipe I want, the next step for me, as you might guess, is to find some good salmon and smoke it myself. In the meantime, if you have a recipe/process you like for hot smoking salmon, I’d sure appreciate an email with it to grandpop1@yahoo.com.

Thanks for stopping by Almost Heaven South.