Our baby daughter turned 35 on Friday and she came down for a special request dinner – seafood. I wish it weren’t such a weak spot in my cooking skills. I decided on mussels for an appetizer and grilled shrimp and salmon for the main course. So the menu was as follows and we ate each course before preparing the next one - it was a leisurely 2 hour dinner:

Moules Mariniere (whatever that means) for an appetizer

I posted the salmon spread the other day and like the others so far, Wende prefered the dill or caper added versions to the plain. For the mussels, I used Mary’s recipe, from One Perfect Bite. 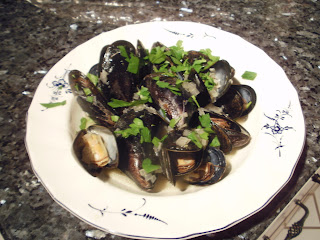 We hadn't had mussels in a long time and had always just steamed them and dipped in butter, but I like this better as they were delicious.  It would take a very big bowl of them to make a meal of though.

I did the shrimp the same as the shrimp the other day, which was olive oil brushed on, a light sprinkling of Emeril's Essence, with added cayenne, on both sides and two applications, per side, of the butter sauce, below, while grilling.

I decided to try this same process on the salmon, but gave it a heavier spice coating - not quite as heavy as I would for blackening in a pan.  While I flipped an buttered the shrimp 3 times, I only flipped and buttered the salmon once.

Since this was to be a special meal, I broke out the charcoal grill and cooked everything direct over a single layer of coals - which cooked faster than my under-functioning gasser. 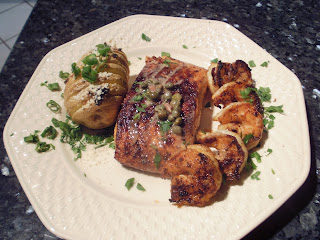 The shrimp tasted similar to the other day, but everything had a nice smokiness provided by the butter hitting the coals - it got so smoky, I could hardly see what I was doing.  The salmon had a similar taste to pan blacked, but not as strong and I'll definitely do this again.  This was my first hasselback potato and I thought it was a nice change, but I believe I prefer a plain ole baked potato and they're easier.

The menu was unknown to Wende until she got here and she said we'd hit some of her favorites and was hoping for mussels.  Since we hadn't fixed them in such a long time, it must have been mental tyelepathy.

I wish all of our children were close enough to come over for birthday dinner.